Give to Caesar and Come Out of the World 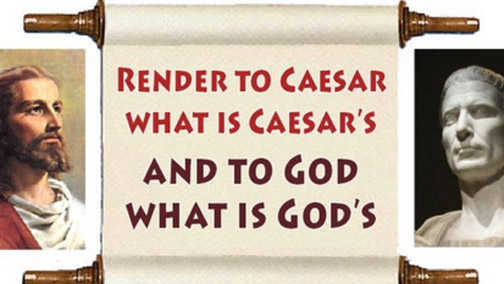 There is an ongoing debate in our house (as I suspect there is in many homes in the country) as to how we are going to solve the ailments of our nation. Both my husband and I agree that America suffers from spiritual issues, and that politics will never be the answer to a spiritual problem. That being said, we are conflicted over the following scenario: how do we reconcile "Render unto Caesar, what is Caesar's" with "Come out of her, my people"?

Let me break this quandary down from our perspective ... In this world, we are subject to the laws of this nation and a constitution that was written to define the powers of government, while at the same time, protecting the rights and liberties of us, the citizens. In Matthew 22, the Pharisees seek to trap Jesus in a question that had the potential to expose Him as a fraud, depending on His answer. They asked Him, “Tell us, then, what you think. Is it lawful to pay taxes to Caesar, or not?” The question was designed to accuse Jesus of either disloyalty to the government of Rome, or disloyalty to the Jewish people and YHWH. Jesus asked to see a denarius, the coin used to pay taxes to the Roman government. He asked, "Whose image is on the coin"? The Pharisees answered, "Caesar's". Jesus's answer was quick, “Therefore render to Caesar the things that are Caesar’s, and to God the things that are God’s.”

This answer is anything but simple. You see, the Caesar's of Rome were considered "divine" gods, and the coins that bore their images were, in all respects, a form of idolatry. They violated the Second Commandment, Thou shalt have no other gods before Me. Jesus understood that men on earth are caught in a battle between two governments -- the government of this world, and the government of Heaven. His statement to give to Caesar what is due him, and to give to God what is His due, is challenging us to know the difference.

So, I acknowledge that being a citizen of the world, and specifically of the United States, I have certain obligations to its government, which necessarily means that politics will play a part in what those obligations will look like. I also recognize that the state of my nation, in many ways, is in spiritual decline. The unrighteous decisions and laws of my government have led to this downfall and as long as politicians continue to act unrighteously, politics will never correct our spiritual deterioration. That doesn't mean that I can't hope and pray for God to raise up righteous men and women to change the direction of our country.

And I am well aware of the warnings that God gives us in the Bible if we continue to go down the road we're on. Jeremiah lived in idolatrous Babylon and the Lord used him to warn the inhabitants of the vengeance that was His if they did not turn from their wicked ways. God used Jeremiah to issue warnings regarding the idols that Babylon worshiped; that they were false, worthless, and a work of delusion... and a time of punishment was coming in which they would be destroyed. The Word of the Lord, through Jeremiah, was "Therefore, behold, the days are coming when I will punish the images of Babylon; her whole land shall be put to shame, and all her slain shall fall in the midst of her". Then comes the plea of the Most High God: Come out of her my people! Let every one save their life from the fierce anger of the Lord!

The Lord is saying have nothing to do with the worldly Babylon and her idolatrous ways. And He tells us to do the same thing in these End Times, as stated in Revelation 18! An angel is prophesied to come down from Heaven and declare:

For all the nations have drunk
the maddening wine of her adulteries.
The kings of the earth committed adultery with her,
and the merchants of the earth grew rich from her excessive luxuries.

Come out of her, my people!

Scripture goes on to say that Babylon's sins are piled up to Heaven, and God has remembered all her crimes. She will pay double for all she has done, and she will receive as much torment and grief as the glory and luxury she gave herself. Obviously, we as righteous Christians, will want to separate ourselves from that Babylonian system. I suggest you read all of Revelation 18 and see if you do not recognize this End Times Babylon as our own nation. And if you do, then you will recognize the tenets of the aforementioned debate in my house and among our family and friends.

If we are to come out of the destructive and anti-Christ Babylonian system, [which is of the kingdom of this world], and separate ourselves by committing our lives to the Kingdom of God, "rendering unto God what is His" [as Jesus suggested to the Pharisees], then can/should we do both? If politics is not the answer to a spiritual breakdown in this country, do we forsake politics all together for the sake of fighting the spiritual battle for the Kingdom of God? If we discern that there are righteous men among the worldly government who want to legislate for Godly justice and morality, should we not stand with them, trusting God to lift them up for His purposes?

Of course, we must also consider that the Enemy is not going to just lay down and abdicate his throne among the halls of Congress. So have the crimes and injustice perpetrated by his minions been heaped so high that God has determined [as is stated in Revelation 18:8, that in one day her plagues will overtake her: death, mourning and famine. She will be consumed by fire, for mighty is the Lord God who judges her? Maybe it is to be our time of judgment and it is time we "come out of her". What does that look like? Let me propose this to you: we recognize that without the intervention of God who appoints righteous men to civil service, politics will never be the answer to restore our nation. So we continue to do what Jesus commanded, giving Caesar what is Caesar's -- we vote, we follow the laws, and we pay our taxes as mandated.

Yes, we are citizens of the world in these fleshly bodies, but our citizenship in God's Kingdom is our greater commission. So we come out of the world's system as much as we can, and transfer to the spiritual kingdom of God on earth; living our lives following His statutes and committed to not sharing in the sins of this world nor receiving any of its plagues. That calls for understanding "the big picture" ... what we are to give to Caesar, even as we come out of Caesar's system. It's just the reality of our existence here on earth. We are in the world, but not of the world. Once we understand that, we do not need to become embroiled in the political arena, but enter the Kingdom of God, yoking ourselves to His righteous government. It is possible to fulfill our responsibilities as citizens of both the world and Heaven, knowing to whom our highest allegiance belongs. It is then that we can join together, declaring "Rejoice, you people of God"!

Jeremiah 51:45-46   Go out of the midst of her, my people! Let every one save his life from the fierce anger of the Lord! Let not your heart faint, and be not fearful at the report heard in the land,