The Spiritual War Between Science and God

I know this title sounds like an oxymoron; Science has very little to do with spirituality.  But as God has revealed more of His Truth to me, I have come to realize that what we see in front of us -- in this realm -- is not the complete picture.  And if you have spent any time in the Bible, then you are familiar with Ephesians 6:12:  For we do not wrestle against flesh and blood, but against the rulers, against the authorities, against the cosmic powers over this present darkness, against the spiritual forces of evil in the heavenly places. [My emphasis].
I am also aware that non-Christians will find neither value nor truth in this post; and many Christians will find it confusing and controversial.  So, you are probably wondering where I'm going with this, and what my purpose is in writing about this subject.  I want to propose the idea that even the field of Science, which is very much in the physical realm, can be influenced by spiritual attackers.  And that's why I was disturbed when I stumbled upon an article at Truthstream Media, entitled "Scientific Proof That Our DNA Is Mutating."  I've been concerned for quite some time that man is delving into areas that are outside our domain on one level, and contrary to God's design on another. 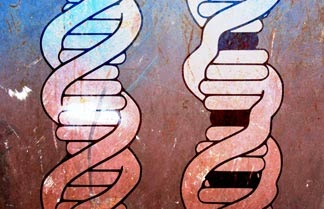 To further emphasize this, the website in5d.com provided me with some interesting information:  "The human genome is packed with at least four million gene switches that reside in bits of DNA that once were dismissed as “junk”; but it turns out that so-called junk DNA plays critical roles in controlling how cells, organs and other tissues behave. The discovery, considered a major medical and scientific breakthrough, has enormous implications ... because many complex diseases appear to be caused by tiny changes in hundreds of gene switches."  Doesn't this imply that our DNA is no accident; and it was created in a highly ordered, and specific fashion by a Supreme Creator?
The reason this topic is on my radar, is because I fear that Science and Medicine are being influenced by spiritual powers that are attempting to recreate the "days of Noah".  Now, before you decide that I've gone completely off my rocker, hear me out.  Those of us who have ears to hear, will know what I am implying.  It's as if, in recent years, God has removed the mystery of Genesis 6:4 to modern-day Christians.  Where once, we just read this passage ("there were giants on the earth in those days, and also afterward, when the sons of God came in unto the daughters of men, and they bare children to them") as meaning earthly kings married women against their will and produced giants.
But as our desire to understand the Hebrew origins and words of the Bible has intensified, we have come to understand that the Hebrew word translated as "giants" in the King James Bible, is actually the word "Nephilim", which in the Hebrew means "to fall; fallen; cast down."  So are you beginning to see where I'm headed?  These "men" who bore children to earthly women were part of Satan's contingent of fallen angels, and part of the spiritual battle to corrupt the DNA of God's creation.  If Satan could pollute man's genetic code, (which makes us to be made in the image of God), then he could prevent God's son (who is perfect) from being born and becoming King of this world.
So for all those who have asked the question, "How could your loving God order Joshua to kill ALL the indigenous population -- men, women, children, animals -- in the land of Canaan?"  There's your answer.  They were the descendants of these fallen angels and possessed corrupted DNA.  It was God's checkmate to Satan's plan to possess this earthly realm.
Now, back to our article about our "mutating DNA" ...  apparently scientists have discovered that beginning 5 to 20 years ago, our DNA began changing.  Supposedly, the scientific explanation is this:  "It is a mutation of our species into something for which the end result is not yet known."  One doctor reported that "people are changing at the cellular level. I am working with three children right now who have three DNA helixes (we normally have one double helix)."  What is especially alarming is her response when asked what characteristics these children display:  "These are children who can move objects across the room just by concentrating on them, or they can fill glasses of water just by looking at them. They’re telepathic. You would almost think by knowing these children that they are half angelic or superhuman, but they’re not. I think they are what we are growing into during the next few decades."  Now do you see why I'm disturbed?
And when asked what other changes we can expect to see, this doctor replied, "There will be no disease, we will not need to die. We will be able to learn our lessons, not through suffering, but through joy and love. The old system has to crumble away, and is not doing that without putting up a big fight. So you have all the wars; a lot of the medical-type of healing is not working; the government is not working."  Can you see the spiritual warfare that is going on?  Satan will once again try to tempt the human race with false promises of eternal life by changing our genetic makeup.  And since this is war, he needs the "old system" of faith in Jehovah and Yeshua to "crumble away".
But as noted in her own words, "the system" is putting up a big fight.  And we know who will win.  In the end, I find it ironic that Dr. Fritz Albert Popp, a noted German biophysicist, is quoted as saying, "We know today that man, essentially, is a being of light ... We are still on the threshold of fully understanding the complex relationship between light and life, but we can now say emphatically, that the function of our entire metabolism is dependent on light."
Too bad that the earthly world of Science doesn't recognize that it is the Light, with a capital L, that sustains our bodies and our spirits.  If our DNA is mutating, it is by diabolical means in an all-out spiritual battle.  Remember, Jesus tells us in Matthew 24:37, ""When the Son of Man returns, it will be like it was in Noah's day."  Spiritual warfare, and polluted and corrupt DNA is what He is talking about.  We're almost there, so get ready for His return!

1 Corinthians 15:24    "Then comes the end, when he delivers the kingdom to God the Father after destroying every rule and every authority and power."