There are so many red flags in an article that I read on C/Net this week.  A company called MicroCHIPS of Lexington, Massachusetts has developed a small microchip that, when implanted, allows a woman to remotely control her reproduction.  The company is touting this new development as a convenient way for a woman to control her contraception .... she simply turns the chip off when she wants to conceive, and then back on again to stop any possibility of pregnancy.
The chip is designed to last 16 years, and delivers a daily dose of 30mg of a drug called  levonorgestrel, used in several hormonal contraceptives and emergency contraceptives.  But here's my first red flag ... when I researched this particular drug, it was identified as the main ingredient in the "morning after pill", whose claim to fame is that it is birth control you can use to prevent pregnancy up to five days (120 hours) after unprotected sex.  As Planned Parenthood is proud of saying, "Accidents happen", and this is an excellent form of "emergency contraception".  In other words, it prevents the implantation of a fertilized egg, which in my book, amounts to an abortion of a living embryo. 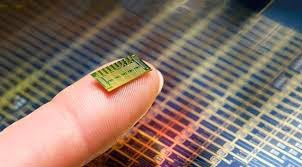 Some of the brand names of this drug include Escapelle, Plan B, "Next Choice" and 72-HOURS, none of which sound like they celebrate life.  Granted "contraception", in general, implies the deliberate use of artificial methods or other techniques to prevent pregnancy as a consequence of sexual intercourse.  I get it; it is a popular method to keep women from getting pregnant who don't wish to.  But I have real concerns that the primary drug in this new microchip has a reputation for destroying eggs after they have been fertilized and implanted, resulting in the destruction of a viable pregnancy.
The second red flag is that the Bill and Melinda Gates Foundation Family Planning program is involved.  Hopefully you are aware that overpopulation is a huge issue for Mr. Gates.  At the beginning of 2014, he is quoted as saying, "[Overpopulation] is a huge impediment in convincing rich world donors that they should feel good about these health improvements. Our foundation focused in the 1990s on reproductive health. We wanted to make contraception available because we thought population growth would make everything so difficult, whether it’s the environment or feeding kids or stability. It was only when we found out about this phenomenal connection between improved health and reduced population growth that we felt: Great, let’s just make the foundation as big as possible to go after these health problems."
I'm pretty sure that he sees too many pregnancies as one of these "health problems".  So, I find it very curious that the idea for the device originated two years ago in a visit by Bill Gates and his colleagues to Robert Langer’s MIT lab. Gates and his colleagues asked Langer if it were feasible to create birth control that a woman could turn on and off and use for many years. Langer thought the controlled release microchip technology he invented with colleagues Michael Cima and John Santini in the 1990s and licensed to MicroCHIPS might offer a solution.
So, let me think about this .... as a woman, would I want to trust my reproductive health to a man that openly espouses population control?  Would I really think that any contraceptive device he was involved in developing could guarantee that I had control over my reproductive options?  That I could get pregnant any time I wished to?
Then there's the red flag that was raised when I realized the implications that the technology could go beyond contraceptives. Inside the chip is a reservoir array which contains and protects, in this case, the hormone. In these reservoirs, however, any drug could be placed, to be released on demand, or according to a pre-programmed schedule.  I'm sorry, but the potential for that to be used for evil schemes is just too apparent.  The MicroCHIPS website states, "These arrays are designed for compatibility with preprogrammed microprocessors, wireless telemetry, or sensor feedback loops to provide active control. Individual device reservoirs can be opened on demand or on a predetermined schedule to precisely control drug release or sensor activation."
Who will monitor exactly how these devices will be used?  And what would keep a corrupt health facility or practitioner from "managing" an aging population or determining that a portion of society was expendable?  Could this be a new delivery system for Mr. Gates' favorite health priority, vaccines?  Oh, there's one more thing ....  MicroCHIPS reports that there's the slight problem of some logistics to work out -- such as encrypting the chips to keep wireless data secure -- but "the concept has been proven to work as desired."  I bet it has!  Unencrypted data would allow them to know our medical history and make those important decisions about what drugs would be best for the elimination of our "conditions" ... or us!
I'm sure I sound super paranoid, and perhaps the Elite have no such plans for controlling the world's population.  Perhaps they really do want to help us poor and downtrodden peasants be as healthy as we can be.  But anytime that anyone suggests that implanting a chip in me that works by "sensor activation", or has the ability to dispense "any drug" through wireless, preprogrammed protocols, then I'm out.  I will just rely on God to be my Healer and leave the fallen angel technology to those who want to trust in this world system.

1 Corinthians 6:19-20    "Or do you not know that your body is a temple of the Holy Spirit within you, whom you have from God? You are not your own, for you were bought with a price. So glorify God in your body."
Posted by Pam Kohler at 7:00 AM