"For I Desire Mercy, Not Sacrifice"

There is a passage in the Bible that has long fascinated me, as it has centuries of Christians. It is John 8:1-11, and is the story of the adulterous woman. It reads like this: 1 but Jesus went to the Mount of Olives. 2 Early in the morning he came again to the temple. All the people came to him, and he sat down and taught them. 3 The scribes and the Pharisees brought a woman who had been caught in adultery, and placing her in the midst 4 they said to him, “Teacher, this woman has been caught in the act of adultery. 5 Now in the Law, Moses commanded us to stone such women. So what do you say?” 6 This they said to test him, that they might have some charge to bring against him. Jesus bent down and wrote with his finger on the ground. 7 And as they continued to ask him, he stood up and said to them, “Let him who is without sin among you be the first to throw a stone at her.” 8 And once more he bent down and wrote on the ground. 9 But when they heard it, they went away one by one, beginning with the older ones, and Jesus was left alone with the woman standing before him. 10 Jesus stood up and said to her, “Woman, where are they? Has no one condemned you?” 11 She said, “No one, Lord.” And Jesus said, “Neither do I condemn you; go, and from now on sin no more.” 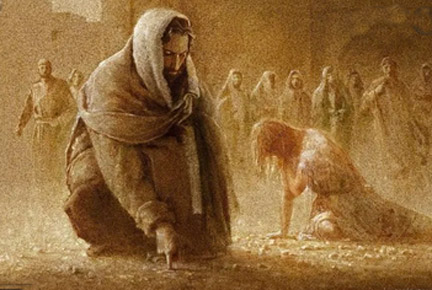 This passage is compelling on so many levels, and I want to share what caught my spirit's attention, as well as tell you how it has been interpreted throughout antiquity. To begin with, we witness the Lord's popularity... all the people came to the Temple to hear Him teach. Certainly, we can ascertain that He is a growing threat to the religious leaders; not only in popularity, but in authority. They call Him, "Teacher".  They are obviously threatened by the content of His message.
Then in the midst of His teaching, the scribes and Pharisees bring a woman whom they proclaim "has been caught in the act of adultery" and challenge Jesus with the Law. Now, the Law they are referring to is the list of offenses referred to in Deuteronomy 22 as "Laws Concerning Sexual Immorality". These "laws" are all centered around the virginity of women, and if that sacred condition is found to be desecrated, then "the men of her city shall stone her to death with stones". Verse 22 goes on to state, “If a man is found lying with the wife of another man, both of them shall die, the man who lay with the woman, and the woman". I find it interesting that she was "caught in the act", and that no man was brought forth with her. So, was she set up in order to test Jesus? Did someone make a false accusation? We have no way of knowing, and there's not enough evidence in the text to speculate. But clearly, the religious leaders sought to have her stoned, and challenged Jesus to go against the Mosaic Law, a grave offense for anyone proclaiming to be a Teacher.
But what did Jesus do? He does the thing that has puzzled Christians for 2000 years. He bends down and writes on the ground. And when the Pharisees continue to harass Him, He turns the challenge against them ... Let the one who is without sin cast the first stone. I can just imagine the silence. And then He bends down and writes on the ground again.
What was the unspoken message He was delivering? What was He writing on the ground? Talk about speculation! Those questions have been asked throughout the last 2000 years! Was He writing something, or perhaps drawing something? Was He, as Jerome [the Latin theologian and historian of the 4th century] suggests, writing down the names of the accusers? Was He referring to the prophet Jeremiah's warning: O Lord, the hope of Israel, all who forsake you shall be put to shame; those who turn away from you [Me] shall be written in the earth, for they have forsaken the Lord, the fountain of living water? Or does the late Professor of Oriental Laws, J.D.M. Derrett, of the University of London have it right when he proposes that Jesus is exemplifying one of the Laws of Social Justice as expressed in Exodus 23:1, You shall not spread a false report. You shall not join hands with a wicked man to be a malicious witness.
And finally, let me offer one last theory. What if Jesus was intentionally replicating the finger of God writing the Law that was given to Moses? Only this time, God [in the person of Jesus] is bringing a new revelation of how He wishes to govern [and us to likewise judge]. In the Old Covenant with His people, God had given the Ten Commandments and strict guidelines to bring them out of the adulterous idolatry to foreign gods in Egypt. Now, in the New Covenant [for followers of Jesus], there is a new way He wants us to consider adultery. In Matthew 5:27-28, Jesus teaches this: You have heard that it was said, ‘You shall not commit adultery'. [As listed in the Ten Commandments; Exodus 20:14]. But I tell you that anyone who looks at a woman lustfully has already committed adultery with her in his heart.
Jesus is bringing a new understanding of the Law. He is not abolishing it -- adultery is still a sin, but we are unable to fulfill the Law. There wasn't one man who was righteous enough to throw the first stone at the woman accused of adultery. He is showing us that the religious aspects of the laws, and their strict legalism, are to be replaced with forgiveness and mercy. That is what He shows the woman. He doesn't tell her she can keep on sinning! In fact, He makes it clear: From now on, sin no more. But He also shows her [and us] that no one has the right to judge another's heart.
That word condemn is the Greek word katakrinō, and it means "by one's good example to render another's wickedness the more evident and censurable". I don't know about you, but I'm not ready to lay claim to that label. And that is why I titled this post on the adulterous woman For I Desire Mercy, Not Sacrifice [taken from Matthew 9:13]. Since God is merciful to remove the misery of our sins by forgiveness, He desires that we do the same for others. This passage shows the nature of Jesus; His lovingkindness toward this woman who needed redemption from her sin, her enemies, and the troubles in her life. But it also shows the nature of Religion; self-imposed righteousness that demands a sacrifice. But God doesn't require that anymore. Jesus became our sacrifice out of His love and mercy for us. He asks that we extend that same mercy to others, even as we counsel them to discontinue their sin.
Whatever He was writing on the ground, He made His point. Beginning with the older ones [the Elders? The Pharisees?], the men walked away, one by one, leaving the woman alone with Jesus. Ultimately, that's where we each find ourselves... in the presence of our Lord, who tells us we are not condemned, as He extends His mercy, and cautions us to sin no more. I love this passage and the wealth of its knowledge!

NOTE: Did you know that there are some versions of the Bible that omit this passage as "not inspired"? It is accepted as portraying the nature of Jesus, but there is conflict over its absence in some of the earliest manuscripts. There is conjecture that scribes understood it as part of the oral tradition of Jesus and his actions and didn't quite know where to include it, so it was arbitrarily inserted in John. It makes no difference to me. I rely on John's last words in his testament of Jesus: Now there are also many other things that Jesus did. Were every one of them to be written, I suppose that the world itself could not contain the books that would be written. Simply put, I am blessed that this account was written and found it's way into God's revelation to us.

Micah 6:8    "No, O people, the Lord has told you what is good, and this is what He requires of you: to do what is right, to love mercy, and to walk humbly with your God."

Email ThisBlogThis!Share to TwitterShare to FacebookShare to Pinterest
Labels: Mercy, Sin, The Law and the Prophets