I was going to title this blog post "Nothing New Under The Sun", a quote from Ecclesiastes 1:9-11, in which the author bemoans, "That which has been is that which will be [again], And that which has been done is that which will be done again. So there is nothing new under the sun ... There is no remembrance of earlier things, Nor also of the later things that are to come; There will be for them no remembrance by generations who will come after them." Then I recalled that I had already used that title in a post from June, 2013. But once again, the headlines have made it relevant.
As I see God moving among His remnant, and see the Gospel of the Kingdom being rediscovered among Christ's followers, I hear the Holy Spirit and our Lord warning me not to become so immersed in teaching the Good News of the Kingdom that I am unaware of what the Enemy is doing in response to our obedience. They are saying "Don't stay focused on the world, but be mindful of [and informed about] what is going on. That is the duty of a 'watcher on the wall'. And when necessary, give My Sheep the knowledge to overcome". And that is the purpose of today's post.
If you've paid any attention at all to the news cycle in recent days -- and believe me, I do not obsess over them -- then you cannot escape the evil machinations of Jeffrey Epstein, the politically, financially, and socially well-connected financier, who also happens to be a registered sex offender, and has now been charged with sex trafficking and conspiracy to traffic minors for sex. As abominable as these charges are, they are not the purpose of this post. An article in The New York Times this week revealed that Epstein had plans to repeat one of Satan's strategies that is as old as the Bible. Let me explain... 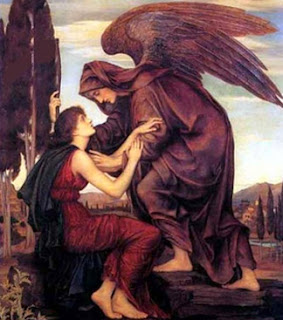 The article's headline reads like this: Jeffrey Epstein Hoped To Seed The Human Race With His DNA. A sensational headline? For Sure. But as a Christian, this plan should sound familiar. If it doesn't, then Ecclesiastes 1:9-11 should enlighten you ... There will be no remembrance [of earlier things] by generations who will come after them. So, why should this news about Epstein strike a chord with Believers? God is trying to show us that what the fallen angel, Lucifer, tried to do to prohibit God's plan to redeem mankind is still very much on the Enemy's radar. Those of us who have ears to hear, will know what I am implying.  It's as if, in recent years, God has removed the mystery of Genesis 6:4 to modern-day Christians.  Where once, we just read this passage ("there were giants on the earth in those days, and also afterward, when the sons of God came in unto the daughters of men, and they bare children to them") as meaning earthly kings married women against their will and produced giants.
But as our desire to understand the Hebrew origins and words of the Bible has intensified, we have come to understand that the Hebrew word translated as "giants" in the King James Bible, is actually the word "Nephilim", which in the Hebrew means "to fall; fallen; cast down."  So are you beginning to see where I'm headed?  These "men" who bore children to earthly women were part of Satan's contingent of fallen angels, and part of the spiritual battle to corrupt the DNA of God's creation.  If Satan could pollute man's holy genetic code, (which produces a body worthy of housing a spirit made in the image of God), then he could prevent God's Son (who is perfect) from being born and becoming King of this world; which in turn made it possible for the Kingdom of God to be reinstated upon the earth, thereby defeating Satan's kingdom.
Satan failed in that plot, and King Jesus was not only born, but He has commissioned us as His ambassadors to overcome the ruler [and god] of this dark world, and to reclaim our dominion over the earth on behalf of our Creator, restoring His will "on earth, as it is in Heaven". But that isn't the only time Satan tried this same strategy. History has recorded that he attempted it through his human agents as recently as the last 90 years or so. In fact, there is plenty of evidence to suggest that Adolph Hitler was interested in the occult, magic, and the paganism of his Germanic roots.  He is said to have marked extensive passages in a 1923 book, titled Magic: History, Theory, and Practice, including one that reads, "He who does not have the demonic seed within himself will never give birth to a magical world". Can you see the same ideology as Genesis 6:4? 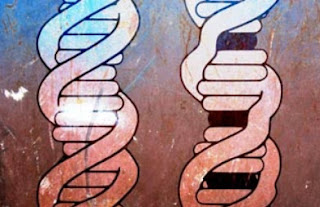 Put simply, our DNA is a highly prized target of the Enemy. It plays a critical role in controlling how cells, organs and other tissues behave. When writing this blog five years ago, I ran across an article in which scientists claimed that beginning 5 to 20 years ago, our DNA began changing. Supposedly, the scientific explanation was this:  "It is a mutation of our species into something for which the end result is not yet known."  One doctor reported that "people are changing at the cellular level. I am working with three children right now who have three DNA helixes (we normally have one double helix)."  What was especially alarming was the scientist's response when asked what characteristics these children displayed:  "These are children who can move objects across the room just by concentrating on them, or they can fill glasses of water just by looking at them. They’re telepathic. You would almost think by knowing these children that they are half angelic or superhuman, but they’re not. I think they are what we are growing into during the next few decades."
That should be a huge warning to us, but it is amazing how quickly our culture will embrace any kind of technology that promises we can escape the deterioration of the human body. Just a few posts back, I wrote about Elon Musk's company Neuralink that is ready to "begin outfitting human brains with faster input and output by next year", all done with a chip to "achieve a sort of symbiosis with artificial intelligence".
But Satan isn't only relying on new technology to change our DNA. He is still willing to engage in his old plan of a "seed war", as exemplified by Jeffrey Epstein's diabolical story. As The New York Times article alleges, "Mr. Epstein, over the years, confided to scientists and others about his scheme ... [his] vision reflected his longstanding fascination with what has become known as transhumanism: the science of improving the human population through technologies like genetic engineering and artificial intelligence. Critics have likened transhumanism to a modern-day version of eugenics, the discredited field of improving the human race through controlled breeding." But breeding with whom? Or what? Certainly, Genesis 6:4 shows us one view of demonic breeders; Hitler had another plan with his perversion of eugenics; and apparently science now has a way to alter or mutate our DNA through genetic engineering by, of, and possibly with artificial intelligence.
With his millions of dollars, and his fascination with "perfecting the human genome", Mr. Epstein attracted scientists such as George M. Church, a molecular engineer who has worked to identify genes that could be altered to create superior humans; and Stephen Jay Gould, a paleontologist and evolutionary biologist. Add these scientific connections to Epstein's desire to inseminate multiple women with his sperm to give birth to his babies; and his desire to have his brain and penis frozen through cryonics, and you just have to wonder if this is Satan's latest plot to corrupt humankind's DNA.
But I just want to go on record as quoting Dr. Fritz Albert Popp, a noted German biophysicist, who said, "We know today that man, essentially, is a being of light ... We are still on the threshold of fully understanding the complex relationship between light and life, but we can now say emphatically, that the function of our entire metabolism is dependent on light."
Too bad that the world of Science doesn't recognize that it is the Light, with a capital L, that sustains our bodies and our spirits.  If our DNA is mutating, it is by diabolical means in an all-out spiritual battle.  (See this recent post about the ability of AI to bend light in our bodies). Remember, Jesus tells us in Matthew 24:37, "When the Son of Man returns, it will be like it was in the days of Noah".  Spiritual warfare, and polluted and corrupt DNA is what He is talking about.
Five years ago, almost to the day, I wrote "We're almost there!" But then, the evidence of Satan's schemes were mostly undercover in the scientific community. Today, the inventions of Elon Musk and the depraved sinfulness of Jeffrey Epstein are freely proclaimed; out in the open, visible and undisguised.
"Vanity of vanities" is how Ecclesiastes, chapter one begins. The Hebrew word for "vanity" is Hebel, meaning "something worthless or purposeless: signifying an idol, which is unsubstantial, worthless, and vain".  All these efforts to defeat man's design are part of Satan's schemes, and they are all in vain. And man's vanishing pleasures and empty satisfactions, as terrifying as they may seem, are fleeting. All the answers to life are found in God. Those in opposition to the Holy Spirit and spiritual men will only find that which is futile and temporary; all this has been tried before -- there is truly nothing new under the sun. What has been tried in ages past, will be tried again ... and God will always be Sovereign. But it is incumbent upon us to remember, and watch, and warn. Keep your spiritual eyes open!

Romans 2:5     But because of your calloused heart and refusal to change direction, you are piling up wrath for yourself in the day of wrath, when God’s righteous judgment is revealed.