Uncleanness, Regeneration, & "The Internet of Things"

I'm going to tell you, right off the bat, that I'm not sure why the Holy Spirit is connecting these seemingly disparate concepts, but I'm going to just go where He is leading me, and pray that it makes some kind of sense at the end of this post.... and that you don't think I've gone completely off the deep end!
You know when a thought or idea comes from out of nowhere and you're not sure why it is suddenly being brought into focus? Well, that happened to me when a dear reader began an email conversation about taking another look at Genesis 6:1-5. These few verses have caused perhaps more confusion and misinformation among the Body of Christ than any other Scripture -- yet they are at the foundation of so much of what Jesus prophecies and what we see happening on the earth today.
This reader was expressing her consternation that the Body of Christ overwhelmingly ignores these verses, and very often just skips over them without seeking to understand their meaning. As I was contemplating her thoughts and reviewing the implications of this Genesis passage, I recalled Jesus's words regarding "unclean spirits". In Matthew 12, He says, Now when the unclean spirit has gone out of a man, it roams through waterless (dry, arid) places in search of rest, but it does not find it. Then in Mark, Chapter 5, Scripture tells us the story of the Gerasene demoniac [or as he is more commonly known, the Gadarene madman]. The Word specifically says, When Jesus got out of the boat, immediately a man from the tombs with an unclean spirit met Him. 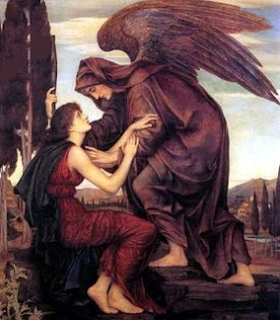 Various translations of the Bible use "demon" or "evil spirit" in place of "unclean spirit". But my mind began connecting the dots as I discerned that what Jesus was seeing and speaking about was connected back to Genesis 6. Let me show you how I got there.... and for the sake of keeping this post focused on my original topic, I am not going to give my complete explanation of Genesis 6. And for the purpose of staying on track with this post, let me just say that based on the Septuagint (the earliest Greek translation of the Old Testament from the original Hebrew), Genesis 6:2-4 reads, "that the sons of God saw that the daughters of men were beautiful and desirable; and they took wives for themselves, whomever they chose and desired ...  The Nephilim were on the earth in those days—and also afterward—when the sons of God went to the daughters of humans and had children by them."  Here, "sons of God" are not earthly men, but as translated from Hebrew (Bene Ha Elohim), it means "angels of God". Therefore, I do not subscribe to the "Sethite theory" that this verse is referring to the offspring of Adam's son Seth, who procreated with earthly women and bore the giants called the Nephilim. No! Scripture means what it says ... "angels of God" (fallen angels) saw that the daughters of men were beautiful, mated with them and created a hybrid race of angel/human beings that were not what God designed or planned. [For a more detailed debate on the Fallen Angel vs. Sethite theories, read my blog post from 2014 by clicking here.] Furthermore, how does a normal human man and woman produce children that become "men of renown" (demi-gods)? And the extra-Biblical Book of Enoch [which is referenced in Jude, 2 Peter and John) states And the women became pregnant, and they bare large giants, whose height was three hundred cubits (450 feet tall)!
Moving on ... the Nephilim were the subsequent offspring of fallen angels and human women. Since these creatures were not made in the image of God, when they died they could not return to the Father [who is pure]; but rather their spirits were left to wander the earth in the form of demons, or evil spirits, or "unclean" spirits. The Holy Spirit made this so abundantly clear to me when I understood the meaning of unclean according to the Hebrew and Greek. "Unclean" in Hebrew means to be contaminated, polluted, foul, opposite of pure. In the Greek, it is interpreted as being filthy or impure. These same spirits are still upon the earth and present today; polluted and corrupted [impure hybrids] -- perfect tools to be used by the Enemy to torment the true children of God.
But, on the opposite end of the spectrum, what happens to us, as humans, when we accept Christ as our Savior? We are regenerated, just as Titus 3:5 says: He saved us, not because of any works of righteousness that we have done, but because of His own compassion and mercy, by the cleansing of the new birth (spiritual transformation, regeneration) and renewing by the Holy Spirit.  In essence, we are "re-gened", if that makes sense. We are restored to the divine image of our Father; there is a new birth that takes place. And Christian scientists are now seeing changes in the DNA of people who have gone from Sinner to Redeemed!
Let's continue ... how are Uncleanness and Regeneration connected to this term, "The Internet of Things"? First of all, you might want to take a look at a post I wrote in 2015, titled "The Terasem Movement, Second Life, & The Rise of the New Nephilim". I know, I know ... it all sounds like a bad science fiction movie title --- but it is all too real and being played out before our very eyes! And I do not write this to exploit radical conspiracy theories. On the contrary, I believe our God is greater than any of Satan's diabolical plans. Rather, I am being prompted by the Holy Spirit to remind Christians not to take their eyes off these schemes, even as we grow in our knowledge and practice of Kingdom living. We must be aware of all the fronts we face in our spiritual battles. 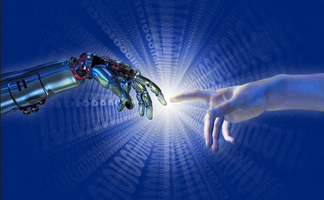 So.... just what is "The Internet of Things"? It is defined as follows: The Internet of Things (IoT) is a system of interrelated computing devices, mechanical and digital machines, objects, animals or people that are provided with unique identifiers and the ability to transfer data over a network without requiring human-to-human or human-to-computer interaction. Sounds like a bunch of geeky technology language, right? But my spirit discerns that it is just the progression of Ray Kurzweil's theory of "Singularity", which is the point at which machines, intelligence, humans (and yes, animals) would merge -- i.e., Transhumanism -- or when machines, animals, and humans will have the ability to interface or interact (merge).
Does anyone else see the danger in that? Or can you hear the warnings of this present danger mirrored in the following Scriptures? In Matthew 24:37-39, Jesus says, " For it will be exactly like it was in the days of Noah when the Son of Man appears. Before the flood, people lived their lives eating, drinking, marrying, and having children. They didn’t realize the end was near until Noah entered the ark, and then suddenly, the flood came and took them all away in judgment. It will happen the same way when the Son of Man appears".  Also, in Revelation 18, John reports hearing an angel thunder from Heaven, "Fallen, fallen is Babylon the great! She has become a demonic dwelling place, a prison for every unclean spirit, unclean bird, and every unclean, detestable beast. All the nations have drunk of the wine of her immoral passion, and the kings of the earth have committed fornication with her, and merchants of the earth have grown wealthy because of her power and luxury.”
Both passages speak of the polluted, impure, foul, and unclean state of mankind in the Last Days. Jesus warns that the same activities that took place in the days of Noah before the flood will occur again before He returns. Heaven, itself, warns in the last Book of the Bible that mankind will become drunk with their power and wealth from the ability to create unclean hybrids. If you pay close attention to the news, they are already mixing animal genes in our vaccines, merging man and machine in Artificial Intelligence, and even exploring implantable smartphones and uploading our brains to the Cloud. None of this preserves us as being made in the image of God!
So, while I do not advocate turning our attention away from our Commission of advancing the Kingdom, I clearly discern that the Holy Spirit does not want us to ignore these warning signals of "the days of Noah". The direction the world is taking will surely affect the next generations and we must not abdicate our responsibility to war in the spirit for them.  So make sure you have your spiritual armor in place and ask the Holy Spirit for supernatural discernment of what is coming against us in the coming years. It has been several years since these "unclean" technological developments have captured the headlines, but do not be lulled into complacency. Yes, we are being directed to advance the Kingdom, but we have not been told to stand down from guarding against the unholy machinations and inventions of men.
I apologize if this topic seems out of character from my normal message. I do not feel called to make this a priority, but I will always listen to the Holy Spirit's prompting and speak from my heart. So, just receive this warning and continue to listen to the Spirit in your own lives. He will not lead us astray. As the song from the Christian band, Mercy Me, says, "Lead me through the darkness. Lead me through the unknown. Oh, Lead me, Holy Ghost"! Blessings to you all, in the Mighty Name of Jesus! Amen!

Luke 21:28    And at last, when you see how the Son of Man comes—surrounded with a cloud, with great power and miracles, in the radiance of his splendor, and with great glory and praises—it will make you jump for joy! For the day of your full transformation has arrived.