Judgment Is Prophesied: Even The Stones Will Cry Out and Accuse 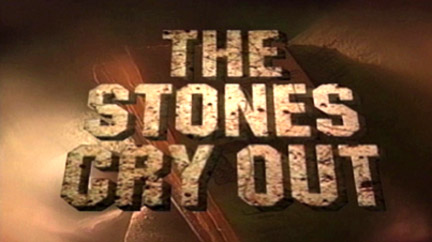 I recently read a fascinating article by Coach Dave Daubenmire, titled Are The Rocks Crying Out. Known for his fearless and outspoken commentary on the state of our culture and the faith of Americans, Coach didn't disappoint when he called out the condition of the Church. As he said, himself, "Are  you sitting down? America already has enough cookie-cutter Christians". This statement was made in support of his supposition that instead of the lukewarm Church leadership leading the way, perhaps God has chosen Elon Musk and Kanye West (as different as they are) to be the useful instruments of His revelation in this corrupted world.

Are these the men who we would expect to be spokesmen for God? I'm pretty sure most of us would say "no". Obviously, their words and their methods don't look like they come from God either. In fact, I'm conflicted as to where Elon Musk stands in God's redemptive plan for humanity. While I applaud him pulling back the veil on Big Tech's censorship and violation of our First Amendment rights, I'm suspicious of his work in the area of artificial intelligence and brain chip interfaces in the name of "medical science". I've never heard nor seen evidence that he has a relationship with God. And then what is there to say about Kanye? His inflammatory rhetoric is stirring the conscience of the culture, to be sure. And his declaration of faith is certainly passionate. Yet his justification for both his faith and his rhetoric is causing an uproar in the national dialogue. How can either of these men be representatives for God and his plan for mankind?

But as Coach Daubenmire points out, "God's ways are not our ways". There are many examples in the Bible where God used ungodly men and ways to change the course of history in accordance with His will. Think Nebuchadnezzar, Darius the Mede, King Cyrus, the false prophets of Baal, and the lying spirit sent to King Ahab. Remember, when God's offers for repentance and forgiveness are rejected time and again, His cup of wrath becomes full. And God is not restricted as to who or how He will see His holy purposes fulfilled. He is Sovereign and can use both good and evil men to accomplish His plans and bring glory to His Name. Are Musk and West divine instruments of God? I can't say for sure, but this I know ... they are revealing the ugly underbelly of our culture and pulling the curtain aside to uncover the corruption in all our ways.

And that's when the Coach calls our attention to Jesus's comment to the Pharisees in Luke 19:40: “I tell you, if these [disciples] were silent, the very stones would cry out.” NOTE: Daubenmire uses this quote to call out the silent leaders in the Church, who have not "led the charge" in summoning attention to the unrighteousness and immorality in this nation. It's been left to God to use unorthodox men like Elon Musk and Kanye West to shake us out of our tepid response to evil. Therefore, he makes this challenge: with the continued silence from the pulpits, will it be left to the rocks to cry out for justice?

But I want to take a look at the context in which Jesus's statement to the Pharisees is made. Jesus has entered the city of Jerusalem on His way to the Cross. The crowds receive Him as a King and the multitudes of Disciples greeted Him with shouts of praise, adoration, and joy. But the Pharisees wanted them rebuked for their boisterous adulation. But in this moment, Jesus exults in His true identity as the Messiah. I love the following commentary provided in the Jamieson-Fausset-Brown Bible regarding this occasion: Hitherto the Lord had discouraged all demonstrations in His favor; latterly He had begun an opposite course; on this one occasion He seems to yield His whole soul to the wide and deep acclaim with a mysterious satisfaction, regarding it as so necessary a part of the regal dignity in which as Messiah He [for this last time] entered the city, that if not offered by the vast multitude, it would have been wrung out of the stones rather than be withheld [my emphasis].

What's interesting is that Luke 19:40 is a direct reference to Habakkuk 2:11. And to understand the context in which the Lord speaks in verse 11, we need to back up to verse 9:
“Woe (judgment is coming) to him who obtains wicked gain for his house [and thinks by so doing] to set his nest on high, that he may be rescued from the hand of evil. Verse 10: You have devised a shameful thing for your house by cutting off and putting an end to many peoples; So you are sinning against your own life and forfeiting it. And now, verse 11: For the stone will cry out from the wall [to accuse you—built in sin!] And the rafter will answer it out of the woodwork".

Read those three short verses again carefully. To how many in the halls of our government and our churches, do these verses apply? How many men charged with the physical and spiritual welfare of peoples have accumulated unclean gain for their own house at the expense of the health, happiness and fortunes of those who have trusted them? Little do they know that their sins do not go unrecognized by the Sovereign God of the Universe, and the wicked gain [profit] they possess will be forfeited [along with their inheritance] in the life to come. And then comes the culmination of the warning: they will not be able to escape the consequences of their sin; the stones of their house -- their enterprise, venture, operation --  will declare that they were built in sin and will cry out in accusation. And the rafters of their house will answer in agreement.

And this is where I'm afraid we are, my friends. I have to agree with Coach Dave Daubenmire who reminds us that God has promised that "there is nothing hidden that will not be revealed". I think we all feel it ... God is doing something. We must give up our "normalcy bias" and expect that whatever He is doing will look like we think it should look. So, for now, we must not discount the unconventional, the unusual, or the nontraditional as being from God. Judgment is coming and we must not let it catch us unaware. And make no mistake ... should the Disciples of Jesus remain quiet, then God will use other means -- an Elon Musk or a Kanye West; even the stones will cry out! But He will not be silenced!

Proverbs 1:18-19  But [when these people set a trap for others] they lie in wait for their own blood; They set an ambush for their own lives [and rush to their destruction]. So are the ways of everyone who is greedy for gain; Greed takes away the lives of its possessors.