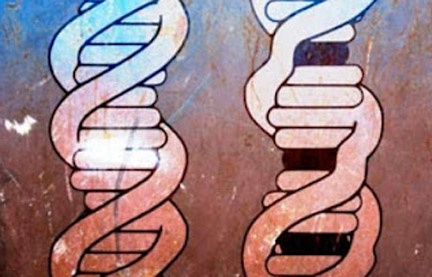 The title of this blog is an often spoken concept of my husband's as we meet with a faithful remnant in our Home. "Seed War" may be a familiar term to you, or it may be a new theory that I will attempt to explain as part of my Biblical worldview.

As I see God moving among His remnant, and see the Gospel of the Kingdom being rediscovered among Christ's followers, I hear the Holy Spirit and our Lord warning me not to become so immersed in teaching the Good News of the Kingdom that I am unaware of what the Enemy is doing in response to our obedience. They are saying "Don't stay focused on the world, but be mindful of [and informed about] what is going on. That is the duty of a 'watcher on the wall'. And when necessary, give My Sheep the knowledge to overcome". And that is the purpose of today's post.

Those of us who have ears to hear, and eyes to see will know what I am implying by the title of this post. It's as if, in recent years, God has removed the mystery of Genesis 6:4 to modern-day Christians. Where once, we just read this passage ("there were giants on the earth in those days, and also afterward, when the sons of God came in unto the daughters of men, and they bare children to them") as meaning earthly kings married women against their will and produced giants, we are now open to receiving this Scripture in Spirit and Truth.

But as our desire to understand the Hebrew origins and words of the Bible has intensified, we have come to understand that the Hebrew word translated as "giants" in the King James Bible, is actually the word "Nephilim", which in the Hebrew means "to fall; fallen; cast down." So are you beginning to see where I'm headed? These "men" who bore children with  earthly women were part of Satan's contingent of fallen angels, and part of the spiritual battle to corrupt the DNA of God's creation.  If Satan could pollute man's holy genetic code, (which produces a body worthy of housing a spirit made in the image of God), then he could prevent God's Son (who is perfect) from being born and becoming King of this world; which in turn made it possible for the Kingdom of God to be reinstated upon the earth, thereby defeating Satan's kingdom of darkness.

And if you need more proof that this "Seed War" is real, consider Genesis 3:15 ... And I will put enmity (open hostility/war) Between you and the woman, And between your seed (offspring) and her Seed; He shall [fatally] bruise your head, And you shall [only] bruise His heel.  This verse makes it very clear that the Messiah (Christ), through His death on the cross and resurrection, will ultimately defeat Satan, the power behind the serpent, with a death blow. But until then, Satan has always sought ways to infiltrate or invade our sacred genetic code in order to destroy our ability to belong to God as His children; to change the way Jesus created us and to impede our ability to connect to Him through the Holy Spirit. He knows he has limited time to accomplish this, and wants to prohibit as many people on earth as he can from being adopted into the family of God. The bottom line is this: we are made in the image of Christ. Satan seeks to replicate beings that are made in his image. Sadly, those that belong to Satan will not be able to be redeemed by the Blood of the Cross.

Satan failed in that original Genesis 6 plot, and throughout the centuries of trying to pollute the human race. King Jesus was not only born, but He has commissioned us as His ambassadors to overcome the ruler [and god] of this dark world, and to reclaim our dominion over the earth on behalf of our Creator, restoring His will "on earth, as it is in Heaven". But Satan has never abandoned the "Seed War" strategy. History has recorded that he attempted it through his human agents as recently as the last 90 years or so. In fact, there is plenty of evidence to suggest that Adolph Hitler was interested in the occult, magic, and the paganism of his Germanic roots.  He is said to have marked extensive passages in a 1923 book, titled Magic: History, Theory, and Practice, including one that reads, "He who does not have the demonic seed within himself will never give birth to a magical world". Can you see the same ideology as Genesis 6:4 and beyond? And in case you've forgotten, a sensational headline from just three years ago read, Jeffrey Epstein Hoped To Seed The Human Race With His DNA. Is there any doubt that Satan's agents on earth are still trying to carry out his plan?

Put simply, our DNA is a highly prized target of the Enemy. It plays a critical role in controlling how cells, organs and other tissues behave. When writing this blog eight years ago, I ran across an article in which scientists claimed that beginning 5 to 20 years ago, our DNA began changing. Supposedly, the scientific explanation was this: "It is a mutation of our species into something for which the end result is not yet known."  One doctor reported that "people are changing at the cellular level." And now we have spent the last two plus years with our bodies fighting a spike protein that has killed millions of people worldwide. Our children are being indoctrinated to question their bodies at the chromosomal level and to freely change the very essence of who Jesus created them to be. At every stage of our existence, Satan is trying to find a way to make us unrecognizable to our Lord and Creator. From the Garden of Eden to this very day in 2022, he is attempting to destroy God's plan of reconciliation with mankind.

New technology, such as Elon Musk's Neurolink, has as its goal to "begin outfitting human brains with faster input and output", all done with a chip to "achieve a sort of symbiosis with artificial intelligence". But Satan isn't only relying on new technology to change our DNA. He is still willing to engage in his old plan of a "seed war", as exemplified by the above reference to Jeffrey Epstein's diabolical story. As The New York Times article alleges, "Mr. Epstein, over the years, confided to scientist and others about his scheme ... [his] vision reflected his longstanding fascination with what has become known as transhumanism: the science of improving the human population through technologies like genetic engineering and artificial intelligence. Critics likened transhumanism to a modern-day version of eugenics; the discredited field of improving the human race through controled breeding." But breeding with whom? Or what? Certainly, Genesis 6:4 shows us one view of demonic breeders; Hitler had another plan with his perversion of eugenics; and apparently science now has ways to alter or mutate our DNA through genetic engineering, possibly with artificial intelligence or how about through a vaccine?

All these efforts to defeat man's design are part of Satan's schemes, and they are all in vain.  All the answers to life are found in God. Those in opposition to the Holy Spirit and spiritual men will only find that which is futile and temporary; all this has been tried before -- there is truly nothing new under the sun. What has been tried in ages past, will be tried again ... and God will always be Sovereign. But it is incumbent upon us to remember, and watch, and warn. Keep your spiritual eyes open!

Revelation 12:17   So the dragon was enraged with the woman, and he went off to wage war on the rest of her children (seed), those who keep and obey the commandments of God and have the testimony of Jesus [holding firmly to it and bearing witness to Him].