How Would Our Nation Be Different If The Church Acted Like The Ekklesia? 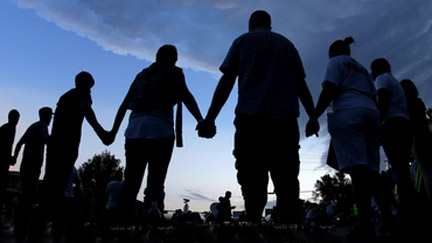 I would like to submit to you that there is not a single citizen of our great nation who would testify that nothing has changed in our country. And in the eyes of the righteous of the nation, there are many demonic strongholds that are attacking the fundamentally Christian foundation of our homeland... and appear to be winning!

But what would it look like if the Church/Body of Christ actually followed Jesus's instructions that He gave to His disciples in Matthew 16:18-19? Before we consider how those instructions could be carried out in the 21st century, let's remember the verses and their context ... Jesus says, "on this rock I will build My church; and the gates of Hades (death) will not overpower it. I will give you the keys (authority) of the kingdom of heaven; and whatever you bind [forbid, declare to be improper and unlawful] on earth will  have [already] been bound in heaven, and whatever you loose [permit, declare lawful] on earth will have [already] been loosed in heaven.”

To begin, there are a couple of ways that we can discern who or what "the rock" is that Jesus is referring to. It could be Himself, who is the foundational rock and cornerstone of the body of believers who are to become the church. Alternatively, the place they were standing [in Caesarea Philippi], was at the rocky base of Mount Hermon, the exact location where the Fallen Angels descended to corrupt humankind by mating with human women. Then there is the fact that instead of the word "church", Jesus actually used the Greek word (adopted by the Romans) of Ekklesia. Jesus very deliberately used this word, and it means “legislative assembly” or “selected ones.” This is not a religious term at all, but a political and governmental term that is used many times in classical Greek for a group of people who have been summoned and gathered together to govern the affairs of a city. For Jesus to use this term means He is giving the keys of governmental authority in his kingdom on earth to the believers who will follow His commands and His Father's form of heavenly government.

This area [and those terms] would have made Peter and his fellow disciples very uneasy.  They knew they were standing on ground that the Nephilim had inhabited, and in Jewish theology, the spirits of these dead warrior-kings were demons.  They believed that this area, with its connection to Fallen Angels and temples dedicated to Zeus and Baal worship, was the entryway to the underworld -- the gates of Sheol, which simply means “the place of the dead” or “the place of departed souls/spirits.”  (The New Testament Greek equivalent is Hades).  In this case, with its history involving Fallen Angels, it was an area of evil departed spirits, or demons.

Therefore, Peter might have understood what Jesus was saying in this way -- that when He referred to "the rock" on which He would build His Church, He did not mean either Peter or Himself.  Peter and the other Disciples knew Jesus was talking about the very rock on which they were standing -- the foot of Mount Hermon, the demonic headquarters of the Old Testament and the Greek world. And they were to be obedient to taking back dominion and authority of the earth from the demonic influence and strongholds to which they were in bondage.  Nothing has changed in 2000 years. That was the disciples' mandate, and it's ours, too.
So, now back to my original question .... what would it look like if we were to step into that mandate as the true Ekklesia? What is our responsibility to effect change on this earth; to take back territories from the kingdom of darkness and transfer them into the jurisdiction of our Father's Kingdom in Heaven? What if the Ekklesia was to divide up into small groups of 5 or 6 and across the Southern border states, thousands of these groups met to determine the areas in their communities and counties that are under bondage to the strongholds that are orchestrating an invasion of our land ... and what if each of these groups met at a particular place on the map and prayed and confessed the sins that have been committed in and on the land, asked God for forgiveness, then prayed for reconciliation, restitution and restoration? What if tens of thousands of the Ekklesia were committed to doing that and to consecrating the land [with holy oil] to break the strongholds of Freemasonry, human trafficking, drug addiction, poverty, murder, and the breakdown of the family unit?
I know that just in the section of the Southern border where I live, the land is saturated with the influence of false gods from the generational iniquity of worshiping the pagan war gods of the Mezo-American era; it has literally been bathed in the blood of human sacrifice for centuries and generations. The Ekklesia groups in the East and the Deep South could do the same, confessing the sins over the land that were committed during the Revolutionary and Civil Wars, and covering those bloody grounds with holy oil and the Blood of Jesus. And so it would go throughout our nation -- from the war-torn cities of Chicago across the plains of our nation's mid-section to the West Coast -- every person who calls themselves a Christian confessing and repenting for the state of our country due to the neglect of the Body of Christ to steward it, protect it, and repent when we have sinned.
Take a slow, deliberate look at this oft-quoted verse in 2 Chronicles, chapter seven: [If] My people, who are called by My Name, humble themselves, and pray and seek (crave, require as a necessity) My face and turn from their wicked ways, then I will hear [them] from heaven, and forgive their sin and heal their land. Our nation stands no chance of being healed unless we can confess our wicked ways in the here and now, and own up to our generational and historical iniquity! I've heard the excuse that the pastors are tired ... but if they are unable to lead the remnant of their flocks to be obedient to 2 Chronicles 7:14, then are they perhaps guilty of not equipping and training their church members to do the ministry of God in the world (Ephesians 4:11-12)? Shouldn't there at least be a remnant that is capable and willing to pray, confess, repent, and turn from the wicked ways of the world, and ask God to forgive us and heal the land?
We are commanded by Jesus to preach the good news of the Kingdom of God that is on earth and in heaven; to make disciples; and to baptize those who receive Christ as their Savior. That is doing the work of the ministry of the Father and Son. But when it becomes clear that our communities and cities across the nation have fallen from God's original design, and our families are in bondage to strongholds that result in addiction, persecution, murder and death, then there is no excuse for the Body of Christ failing to be the Ekklesia and governmental authority of the Kingdom of God in people's lives. If everyone who professed faith in Jesus was committed to joining with a remnant of fellow believers to confess their sins and the sins of the nation -- and then repent and ask for forgiveness -- and then bless the land and ask God to heal it, just think of the impact that would have against the kingdom of darkness!
And for all of you who are walking this out already, God bless you! Join with me to pray that this will become a wave of revival among the Body of Christ, and that we will begin to see this nation be freed from the demonic strongholds that threaten to bring us down. I believe that there are legions of Heaven's angelic army just waiting for us to ask that they be unleashed to fight in the spiritual realms. Let us partner with them, under the leadership of Jehovah Sabaoth, the Commander of this mighty heavenly army, and may we see the darkness defeated in our generation. Amen!
Hosea 14:9     Whoever is [spiritually] wise, let him understand these things; Whoever is [spiritually] discerning and understanding, let him know them. For the ways of the Lord are right, And the righteous will walk in them, But transgressors will stumble and fall in them.
Posted by Pam Kohler at 8:30 PM