This past weekend, Mark and I gave a 6-hour teaching to a group of about 60 Christians, titled Freemasonry, The New World Order, and the Anti-Christ spirit". It was the result of a five-year search for God's Truth concerning Satan's attacks on our nation and the world. In addition, through our Inner Healing Ministry, we have also discerned how these often hidden and unidentified spiritual structures have affected the lives of so many people. The Lord had been prompting us to "share what you have learned" for some time, so we set about preparing this extensive presentation to a group of interested Christians.

The first thing we made clear was that our presentation would challenge each one of them, whether they were new on their journey or a seasoned veteran. As we have continued our research through the years and tried to present it to our fellow Believers, we have discovered that we Christians tend to live in a Christian "bubble" so to speak; a mindset that mirrors that of our secular neighbors -- a sort of "religious normalcy bias". Our faith has been rooted in this theological idea that Jesus is our Savior in everything, and nothing bad can happen to us. And, secondly, we are Americans and nothing as bad as what happened in the Bible is going to happen to us, simply because it hasn't happened yet. I'm sure the Israelites and their status as God's favored nation lulled them into the same false security, too.

So, the first thing we needed to establish was some Biblical concepts for why we are standing on the wall warning them of things that could be coming. The chaos that ensued in the ancient nation of Israel, and that we are seeing on the streets of our country today, is the result of generational iniquity that has continued in family [and national] bloodlines. Iniquity happens when sin is not confessed and repented and progresses to outright rebellion, which then becomes so twisted and perverted that behavioral patterns and mindsets take hold in our DNA and genes so that wicked behaviors are passed down in our bloodlines. Baal and Molech worship, asherah poles, and groves and high places are examples of the iniquity that ran in the bloodlines of the ancient Israelite kings, who then introduced it to the inhabitants of the tribes of Israel. 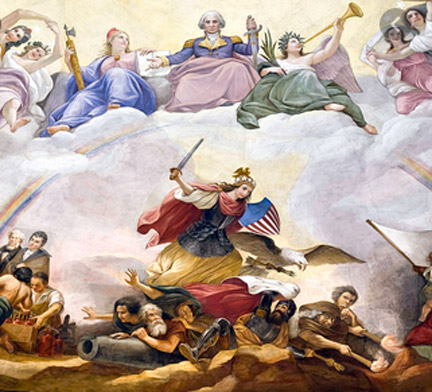 In our history and culture, the brotherhood of Freemasonry has been at the foundation of our national government since its inception. The dome of our national capitol building in Washington, D.C. is painted with a scene called "The Apotheosis of George Washington". The word apotheosis means "the elevation of someone to divine status; deification". Now, since the time I was old enough to read, I have loved the story of the founding of our nation. I was a serious student of American history and the Revolutionary War. I have always believed that freedom and independence flow through the veins of everyone who calls themselves "American". I have been proud to call myself an American and a patriot [and still am]. Don't get me wrong, I still believe that, culturally, this is a Christian nation. BUT, when I discovered that this painting by Constantino Brumidi pictured George Washington as the god of America sitting in the heavens, attended to by the Roman goddesses Columbia [also known as Liberty or Freedom] and Minerva, along with the gods Mercury and Vulcan, my spirit knew this vision of America was not what God had in mind for our nation.

By the way, Washington was the Worshipful Master of the Freemason Grand Lodge of Maryland. Furthermore, a banner waves over Washington's head with the national motto "E Pluribus Unum"; out of many, one. And our money is printed with the slogan, "Novus Ordo Seclorum"; New order of the Ages. So, was America founded on one of Freemasonry's hidden agendas, a One World Government? Is that why Washington is quoted as saying, "The United States was, and is, the great Masonic experiment?" Was it a coincidence that the artist of the Apotheosis was a 33rd degree Mason, a protégé of Guiseppi Mazzini, also a 33rd degree Mason and the Italian founder of the Mafia, another secret organization? Or that Benjamin Franklin, Samuel Morse [inventor of the telegraph system], and Robert Fulton [inventor of the first steamboat and steam warship] are all 33rd degree Masons and pictured in the painting with Minerva, the goddess of "crafts" and wisdom? And why does the Great Seal of the United States eerily resemble the seal of the Connecticut Freemasons? 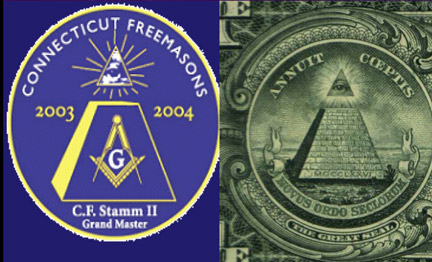 And if you need a refresher on exactly why I am singling out the Freemason aspect of our Founding Fathers, let me refer you to a 3-part series I wrote on the subject, beginning here. For the purpose of this blog post, I need you to understand that I do not judge the hearts of men who decide to join this secretive organization. That is for the Lord to determine. But I can clearly discern that the oaths, curses and rituals they perform mock the Lord, as well as break the commandments He has given us not to do them. Any secret organization that takes oaths to false gods such as Abaddon, Brahma, Vishnu, Shiva, On and Osiris, Horus, Thor and Odin, Allah and Lucifer and whose members have been in our government since the beginning and thrive in our current Congress, should make us get on our knees and pray, and then stand up and fight in our God-given power and authority.

Any secret organization that curses its members for revealing its hidden agenda by releasing the spirit of Python to squeeze the spiritual life out of them; or curses against their bodies, including their throat, vocal cords, nasal passages, heart, chest, or lungs, and engenders a spirit of fear or suicide, is diabolical and wicked. Any secret society that has rituals that include falling into a coffin, drinking from a human skull, taking off the wedding ring and putting on the lodge ring, and combining blood and sex rituals is evil and not of the Lord.

I do not dispute that good Christian men are Freemasons. But they are blinded to its nefarious spiritual roots the minute they put that blindfold [called a hoodwink] on at their initiation ceremony. They are introduced to the Business and Charity image of the Lodge and convinced that the words spoken and the rituals enacted are innocent and harmless. They are anything but that to our Lord! I believe that many of the members are incognizant of exactly who and what they are connecting themselves to, and what spirits they are giving legal rights to.

Since the Garden of Eden, Satan has been crafty and cunning in all his ways, and he has been able to weave false theology, the occult, and witchcraft into secret societies and organizations that seek to rule the world with him. What I have touched on today is just a small picture of how insidious are his ways. He has been able to weave his web into the fabric of our nation without the masses even being aware of it. In the next post, we will step back and get a broader picture of how this web intersects with the higher levels of Satan's entourage who are even now planning on taking over the world. As Christians, we stand in the way, with the potential to defeat them -- IF we will stand and fight and occupy until the Lord returns. Join me next time as we take a step back and see the Enemy's ultimate plan.

Ephesians 5:11-12      Do not participate in the worthless and unproductive deeds of darkness, but instead expose them [by exemplifying personal integrity, moral courage, and godly character]; for it is disgraceful even to mention the things that such people practice in secret.