I am constantly amazed at the boldness and tenacity of women who will stand for what they believe in.  Last week, just such a woman, whom I admire greatly, traveled to Washington D.C. to pray at the Supreme Court as the Justices heard oral arguments in a Texas case, Whole Woman’s Health v. Hellerstedt.  As many of you know, this case is about setting strict limitations on abortions in the state of Texas, and before the death of Supreme Justice Antonin Scalia, there was actually hope that if the Supreme Court upheld Texas's law, we might be seeing the death of Roe v. Wade.
As much as I would like to discuss this case and its implications for the millions of prospective aborted fetuses, this case was not the sole reason my friend was in D.C.  She also went to our nation's capitol to pray against the influence of Freemasonry on the Court and in our Government.
Now, I am fully aware that this is a highly controversial subject and there are those who will refuse to even consider it.  And before I go any further, I want to make it clear that I am not speaking out of ignorance or personal bias.  I have done my research and so should you!  Do not take my word for it, do not agree with me because we might be on the same page on other issues, and most importantly, do not accept what others have said about it, either.  Do your own research because it is that important of a topic, and you should be educated on the subject and form your own opinion.  And please ... the one thing I do not want you to do is simply ignore it.  I believe Freemasonry will become increasingly important to us as we select our next President and as we come ever closer to the return of our Lord.
Why?  Aren't the Masons just another organization like the Rotary Club or the local Optimists Club?  Aren't they just a group of networking professionals?  After all, how many of our grandfathers were Masons, and they always told us it was a charitable and community organization, right?  But here's the first thing you need to know ... it is a highly secretive society.  And if you are a Christian that should be your first red flag.
Before I get into my concerns about the organization, I want to make this statement: to determine if something is right or wrong, according to God's will, we should always go to the Bible.  If we are immersed in God's Word, and pray for God to reveal His truth, we can count on the Holy Spirit to help us discern any matter.  That has been the basis for my taking on the task of understanding the history and consequences of Freemasonry. 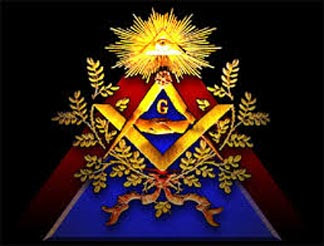 So, as I have already stated,  Freemasonry is a secret and exclusive organization.  While it may seem as if they are a harmless fellowship of businessmen, and they appear to promote a belief in God, you should know that my research has shown the only belief requirement is not that one must believe in the True and Living God, but rather, that one must believe in the existence of a “Supreme Being”, which includes the “gods” of Islam, Hinduism, or any other world religion.   In fact, Masonry teaches that it is G.A.O.T.U. [the Great Architect of the Universe], whom Masonry believes is the true God of the universe, and who is representative of all gods in all religions.  So, while it may appear to be compatible with Christianity in outward appearances, it clearly contradicts God's first commandment:  You shall have no other gods before Me.
You will hear all kinds of arguments that Freemasonry in America is different; that our Founding Fathers (including George Washington) were Masons, so how can it be bad?  I find it interesting that those who say that there's nothing wrong with Freemasonry will use this argument... we all know George Washington was an honorable man, and he was a Mason.  Yet these same people, when confronted with skepticism about Freemasonry, are quick to point out that there are only one or two references to him ever attending a meeting, and he eventually quit his local Lodge.  So, which is it?  Are you defending Freemasonry, or trying to create distance between it and the Father of our Country?
What these same people may be unaware of is that there was such concern about the nefarious activities of Freemasons in the early years of our republic, that John Quincy Adams ran for President on an anti-Masonic ticket.  In fact, the movement against Freemasonry was quite extensive and lasted throughout the 19th Century.
There are still others who will try to say that, yes, historically Freemasons may have included practices and symbols from ancient Egypt, but they don't have any real significance to the modern Mason. This fact alone should be enough to steer away any Christian. Egypt in ancient times was known for pharaoh-worship and dedication to various false gods.  That certainly could not be the practice of today's modern Masonry ... or could it?  Read what an ex-Mason, who is also a Christian, shared about his experience:  In January of 1968, I was installed as Worshipful Master of a Masonic Lodge of about 600 men. As far as I was concerned, I had reached the pinnacle of life. As a Worshipful Master, I had total autocratic authority over the affairs of my Lodge with accountability only to the Grand Master of my State....
Very early during my term as Worshipful Master, while conducting a Masonic business meeting, one of the brothers present voiced his objections to the closing of Lodge prayers in the name of Jesus Christ. Masonic tradition in Maryland had been to close the prayers by saying: "May every moral and social virtue cement us, Amen, So Mote it Be."
In all my years as a Mason, I had never heard one objection to the name of Jesus being used by our Chaplain to close his prayers. I assured the Masonic brother who objected that I would take up the matter with the Grand Master. Several days later, I met with the Grand Master and explained the problem with the prayers, as well as other concerns. The Grand Master informed me that Freemasonry accepts for membership men of every faith or religion, so long as the prospective member believes in a Supreme Being (whomever he may be) and in the resurrection of the body to a future life (however and through whomever that was accomplished.) This was a great shock to me. I had not realized that those who were members of anti-Christian religions could become Masons.
The Grand Master informed me that one of my duties as a Worshipful Master of my Lodge was not to offend any brethren who were not Christians, even if this meant I had to refrain from using the name of Jesus Christ in my prayers. He advised me that as Grand Master he had the authority to disband my Lodge and remove its Charter as a Lodge, if I persisted in using the name of Jesus with members present who objected.
In March of 1973, The Grand Lodge of Maryland Committee on Masonic Education approved the following statement regarding prayers in a Masonic lodge:


All prayers in a Masonic Lodge should be directed to the one Deity to whom all Masons refer as The Grand Architect of the Universe. We address Him as our Heavenly Father, Eternal God, Almighty, or Everlasting God. We should close our prayers with an expression such as, 'In Thy most holy and precious name we pray...’, using no additional words which could be in conflict with the religious beliefs of other Masons present at the meeting. The brother who offers up the prayer does so for all members and visitors present, rather than for just himself. (Maryland Mason Magazine, March 1973).

Now this man's faith in Freemasonry was shaken; although his faith in Jesus Christ was not.  And it caused him to take a closer look at the "fellowship" of this organization and how it corresponded to his Christian faith.  With new eyes, he was able to see that in the center of every Blue Lodge is an altar. Resting on top of the altar is what many Masons refer to as the Great Light of Masonry, the Bible. I later discovered that Freemasonry declares the sacred book of any and all religions in the world equivalent to the Bible. Any "sacred book" may rest on the altar in a Masonic Lodge, to oblige a Mason who does not accept the Bible as God's word.
He came to the shocking realization that "I now had an irresistible force meeting an immovable object, namely the God of the Universe, Jesus Christ, and the god of Freemasonry, Satan. How could both belief systems be regarded as truth? I believed that the primary purpose of every Masonic degree was to depart spiritual light, wisdom, truth, and knowledge regarding life, death, the hereafter, and our interpersonal relationships with others.  [But now] after reading and studying various Masonic authors, I realized that Freemasonry considers Jesus Christ as no greater than Moses, Elijah, Mohammed, or Buddha."
Now, maybe this doesn't matter to you.  If you aren't a Christian, then I doubt that these revelations will have much impact on you.  But if you have accepted Jesus as your Savior, then there is much more in the oaths and the demands on men and their families that I will be revealing to you in the next post.  It is not my desire to bash the sincere desires of men to better themselves or society. But it is my wish that everyone understand the deception and the temptations that lure people into this organization.  And I especially want to warn Christians about letting it into their families or their Churches!  I want you to put on your spiritual armor and concentrate on the Belt (or Girdle) of Truth -- it is God's Truth! -- Not the truth of the world or men, no matter how enticing and convincing it may be.
I know that I may have offended many people with this post and will be discounted as an alarmist or unduly inflammatory.  But I am accountable to Jehovah God and when the Holy Spirit pricks my spirit with something to speak forth, then I cannot suppress that command.  It is my sincere hope that you will not dismiss this topic as inconsequential, because I fear that the spirit behind this organization can cause great damage to both believers and non-believers, alike.  Please take the time to study it and pray about it, asking God to reveal to you what you need to know.  And tune in for the next post, where I will discuss the blending of the Church and Freemasonry.

John 18:20    "I spake openly to the world; I ever taught in the synagogue, and in the temple, whither the Jews always resort; and in secret have I said nothing."