How Do We View God's Justice and Righteousness In The 21st Century?

The concept of Justice and Righteousness can be a confusing issue among both Christians and non-Christians alike. For starters, among the various translations, the two terms "justice" and "righteousness" are often interchangeable. So, at times God's justice is His righteousness, as in the ESV version of Psalm 106:3, which says, "Blessed are they who observe justice, who do righteousness at all times!". The structure of the sentence seems to indicate that the two clauses are similar in meaning. Yet the King James translation of that same verse indicates two separate and independent clauses: "Blessed are they that keep judgment, and he that doeth righteousness at all times."
Again, we see a confusion of terms in Deuteronomy 32:4, which says, "The Rock, his work is perfect, for all his ways are justice. A God of faithfulness and without iniquity, just and upright is he." Yet that same verse, in the King James version reads, "He is the Rock, his work is perfect: for all his ways are judgment: a God of truth and without iniquity, just and right is he." Is God's justice to be understood as His righteousness, or is it His judgment? No wonder we, in the 21st Century, have a hard time understanding the true nature and character of our God! 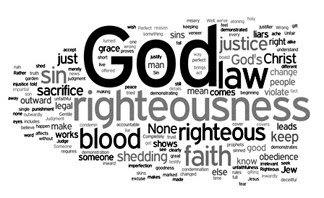 Proverbs 28:5    Evil men do not understand justice, but they who long for and seek the Lord understand it fully.