Invention of the Devil

There are some days that the Holy Spirit shows me something and my human spirit screams "Noooo!" At the same time it hears the Lord say, "My people perish for lack of knowledge. Show them this." I promise you that what you are about to read is absolutely 100% true and for those with spiritual eyes to see, it will be a warning of things to come on the earth.
If you have any awareness at all of what is going on in the world, then you cannot ignore the rapid advancement of technology and the growing relationship between artificial intelligence (AI) and human beings.
Six years ago, in 2013, I was writing a series of posts on this phenomenon and shouting the warning signs of how Satan will use this to separate mankind from God. At that time, the Holy Spirit counseled me to focus on those aspects of the world [for a season]. Then God pointed me in a different direction that ultimately led to our Inner Healing Ministry and an assignment to write/teach on the Gospel of the Kingdom and the Kingdom of God. But when I saw an article on Elon Musk's new start-up tech company, Neuralink, I was prompted to go back to see how far the Enemy has advanced his agenda in the last six years. 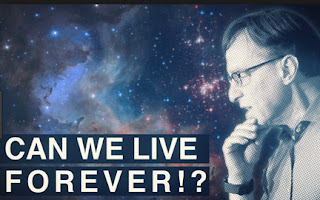 In 2013, Holy Spirit was shining a light on Ray Kurzweil, who had been the Director of Engineering at Google, but whose fame is now centered around his reputation as a revered futurist. In a June 2013 article on a U.K. website, he claimed that we are not far away from replacing our flesh and blood body parts with mechanical parts. Combine that with the scientific community's plan to develop a technological system by which your mind can live forever in a digital state, and you basically get a robot version of yourself. In the article, Kurzweil said, "Based on conservative estimates of the amount of computation you need to functionally simulate a human brain, we'll be able to expand the scope of our intelligence a billion-fold." Because of the astounding developments that have taken place in genetic sequencing and 3D printing over just the last few years, scientists will be able to combine the abilities of a computer with God's created human brain, and basically usurp man's natural state and produce a machine that we were never meant to be.  We will no longer be made in the image of God, but in the likeness of a machine-driven computer.
That may sound like I am fear-mongering, but consider Ray Kurzweil's forecast: "We're going to become increasingly non-biological to the point where the non-biological part dominates and the biological part is not important any more. In fact the non-biological part [the machine part] will be so powerful it can completely model and understand the biological part. So even if that biological part went away it wouldn't make any difference."
Back in 2013, he predicted that the intelligence gap between humans and computers would be closed by 2029. Here's how he made his case: "We can now see inside a living brain and see individual inter-neural connections being formed and firing in real time. We can see your brain create your thoughts and thoughts create your brain. A lot of this research reveals how the mechanism of the neocortex works, which is where we do our thinking. This provides biologically inspired methods that we can emulate in our computers. We’re already doing that. The deep learning technique that I developed uses multilayered neural nets that are inspired by how the brain works. Using these biologically inspired models, plus all of the research that’s been done over the decades in artificial intelligence, combined with exponentially expanding hardware, we will achieve human levels within two decades." He said that in 2013, which was six years ago. According to his timeline, we are within 14 years of that nefarious accomplishment.
So, advance to 2019, and an article on TechCrunch.com, and the announcement that Elon Musk, a technology entrepreneur and engineer, has a start-up company called Neuralink, that is ready to "begin outfitting human brains with faster input and output by next year". Neuralink is working on technology that’s based around “threads,” which it says can be implanted in human brains with much less potential impact to the surrounding brain tissue versus what’s currently used for today’s brain-computer interfaces. “Most people don’t realize, we can solve that with a chip,” Musk said to kick off Neuralink’s launch event, talking about some of the brain disorders and issues the company hopes to solve.
Notice how casually he talks about implanting a chip to solve brain "disorders and issues". I'm not disputing that there are very real health issues involving the brain, but when Musk says that, long-term, Neuralink really is about figuring out a way to “achieve a sort of symbiosis with artificial intelligence" and "for now, the aim is medical" ... well, I get shivers down my spine, and that's when my spirit starts the aforementioned screaming of "Nooooo!". And, I have to say, it more than concerns me when I read that "the plan is also that the electrodes implanted in the brain will be able to communicate wirelessly with chips outside the brain, providing real-time monitoring".
That's especially troubling when Holy Spirit reminds me that in 2013 Ray Kurzweil was noted as being a strong proponent for what he calls an "exponential growth of knowledge" and was focused on controlling the neocortex part of our brain (where we do our thinking).  He even went so far as to trying to understand why some people (like me) are so resistant to accepting this kind of research.  He seems to think that people who are resistant have disorganized neocortexes (read there is "something else" that prohibits us from being manipulated).  See if you can guess what that "something else" might be from this statement he made in reference to his friend, the late Steve Jobs (of Apple fame).  Jobs famously proclaimed, “Death is very likely the single best invention of life. It’s life’s change agent.” 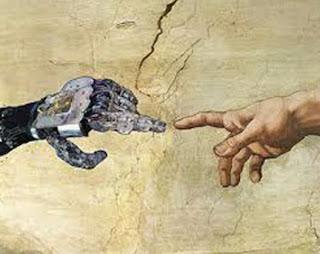 But Kurzweil had a very unique perspective on Jobs's thought.  "I call this a deathist statement .... Religion, which emerged in prescientific times, did the next best thing, which is to say, ‘Oh, that tragic thing? That’s really a good thing.” We rationalized that because we had to accept it. But in my mind death is a tragedy. Our initial reaction to hearing that someone has died is a profound loss of knowledge and skill and talents and relationships."
It's at this point that my spirit and my brain ask, "Where is God in this technology?" Can you see what a lack of God does for you?  Because my initial reaction to hearing that someone has died is, "What is it like standing in the presence of Jesus?"  The irony of the whole Artificial Intelligence system is that the researchers and scientists see only the significance of the human brain.  They deny the plausibility of our spirit and connection to a living God.  So while vehemently denying the existence of God, they are, in effect, trying to play God.  (Boy, are they in for a surprise!)
I may not be able to fight their system on a scientific level, but I have to ask this question .... in light of how I plan to spend eternity versus their strategy for expanding [and controlling] knowledge, who is really the intelligent one?
If you understand nothing else from this post, please grasp this truth:  the Age of Computers is a tool in the hands of the one who would separate us from our Creator.  But only if we let him!  Can anyone dispute that their iPhone or iPad occupy "countless ways of killing time" -- ways that keep us from engaging with God?  And can inventors such as Kurzweil and Musk deny that their goal is to fundamentally change who we are as humans, and that as scientists/inventors, they now conceive of themselves as their own god?  The tragedy is that through their inventions, they will entice far too many of us to take our eyes and hearts off the true Creator.
Just like Nimrod and the folks at the Tower of Babel, our modern-day technological geniuses want to become famous by displacing the need for God.  Motivated by pride and arrogance, they have made a name for themselves.  But perhaps they should revisit that section of the Bible and learn of the destruction that was the result of such conceit.  God will not allow His Sovereignty to be usurped; and not only did they not achieve the greatness they sought, but they suffered His Divine Judgment.  Watch and see ... history is going to repeat itself.

Luke 1:51     He has done mighty deeds with His [powerful] arm; He has scattered those who were proud in the thoughts of their heart.