The Danger of Narcissism in The Body of Christ

I recently read an article by Joseph Mattera in Charisma Magazine, titled "9 Signs You're Operating in A Spirit of Lawlessness Instead of God's Kingdom". The article was addressed to pastors who were more interested in empire building than in equipping the saints to do the ministry of spreading the gospel of the kingdom.
One of the signs was this: you are a narcissist in relating to your desires in life. The article referenced Ezekiel 34 and "the judgment God will bring on shepherds who use and abuse the sheep for their own pleasure." It focused on pastors in the church and the narcissism that leads them into building churches that glorify themselves and [leads them] away from their kingdom assignment. But I will also tell you that this particular sin is often found in our Deliverance ministry among individuals looking for spiritual healing.
The psychological definition of narcissism -- selfishness involving a sense of entitlement; egotism; self-absorption; self-love -- points to the Biblical warning to us believers: But you need to be aware that in the final days the culture of society will become extremely fierce and difficult for the people of God. People will be self-centered lovers of themselves and obsessed with money. They will boast of great things as they strut around in their arrogant pride and mock all that is right. They will ignore their own families. They will be ungrateful and ungodly (2 Timothy 3:1-2). 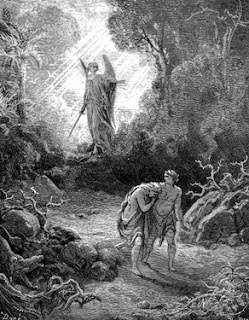 You see, the sin of Pride is at the root of Narcissism and has been a problem for God's people ever since Lucifer fell from Heaven and brought Pride to the Garden. It was Pride that convinced Adam and Eve that they could decide for themselves to eat of the Tree of the Knowledge of Good and Evil; that they could be "like God". It was Pride that caused their separation from the Presence of God and their exile east of Eden. It is Pride that keeps people from recognizing their sin, or convinces them to cover up the sin that was committed against them.
Narcissism has been a most useful and powerful weapon of Satan's in keeping all human beings -- both believers and non-believers -- in bondage to his kingdom of darkness. This has resulted in innumerable opportunities for spirits of lawlessness and independence [from God] to gain strongholds in people.
We have many examples of Narcissism in the Bible, but I want to concentrate on two of the better known. The first is Jezebel, and her spirit is very evident in today's world. Ryan LeStrange, in his book, Hell's Toxic Trio, says that "Jezebel is a bewitching spirit" and "the first component of witchcraft is rebellion".
The Bible Study Tools website gives this testimony of Jezebel's character in the Bible: "As a woman seeking more power, she sought to destroy those who questioned her and most of the prophets of Yahweh were murdered at her request ...  Jezebel has come to be recognized as a model of the wicked woman, embodying the characteristics of cruelty, greed, and vanity", or as the Bible describes people like her, "self-centered lovers of themselves".
But here is the thing you need to understand: the Jezebel spirit is sexless; it can manifest in either a man or woman. Both Adam and Eve gave in to rebellion and it was Satan who found an open door into Jezebel's heart, and he is the originator of her rebellion. So he is only too willing to sow that same spirit into any willing person, male or female. We have seen many men come through Deliverance with "Jezebel spirits". Whenever this spirit is present it is operating in a seductive and controlling manner with the goal of destruction for selfish purposes. We see that in the story of Jezebel and Ahab in the Bible. She was able to seduce Ahab to abandon his God and serve Baal and worship him, leading to the destruction of the prophets of the Lord. 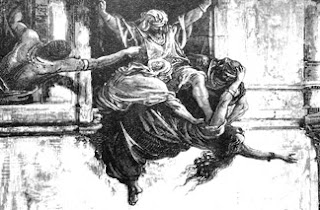 In Hell's Toxic Trio, Ryan LeStrange writes, "[Jezebel] is a perverse spirit of domination that works to open up gateways for demonic activity to overthrow godly plans, families, ministries, and people ... The Jezebel spirit neither honors nor recognizes covenant. When this spirit operates in families, it manipulates and forms alliances to fulfill its own evil agenda. When this spirit operates in ministries, it totally disregards authority, honor, and relationship [towards the Lord] to pursue its own desires. It is totally deceptive and demon-inspired." Power and Control are its motivators.
The other prime example of Narcissism in the Bible is Nebuchadnezzar.  We know the story of Nebuchadnezzar largely from the perspective of Daniel, the Jewish prince who rose to prominence in this Babylonian's kingdom. Daniel became known to King Nebuchadnezzar because he was able to interpret the king's dreams. But it was Nebuchadnezzar's arrogance and pride that saw him reject the repeated warnings God sent in those dreams. Although he praised the God of Daniel after the interpretation of the statue of gold, silver, bronze and iron, he refused to repent, believing himself to be a legend [in his own mind] and above reproach or defeat; certainly above the chastisement of Daniel's God. He believed in his own self-importance.
Again, we can apply the warning from 2 Timothy (above) .... They will boast of great things as they strut around in their arrogant pride and mock all that is right... They will be ungrateful and ungodly. But God humbled King Nebuchadnezzar and brought him into a season of insanity that he might finally repent of his arrogance and pride and acknowledge the sovereignty of YHWH. 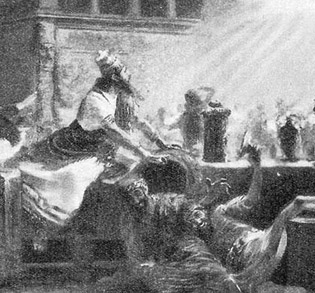 The Bible is full of other examples of narcissism and self-love: Cain, Saul, Absalom, Azariah, Manasseh, and most likely even Solomon. And they all learned painful lessons! And Jezebel and Nebuchadnezzar's lessons were particularly traumatic. But there is a difference in how they responded to the warnings of the Lord. Jezebel was tossed out of a window by her eunuchs and her body was devoured by dogs. There was no repentance on her part and she suffered a violent death.
But God will offer mercy to those who accept His chastisement and turn back to Him. Nebuchadnezzar, after his season of insanity, lifted his eyes to heaven, his reason was restored, and He blessed the Most High, and he praised and honored God with this prayer: His dominion is an everlasting dominion, and His kingdom endures from generation to generation, all the inhabitants of the earth are accounted as nothing, and He does according to His will among the host of heaven and among the inhabitants of the earth; and none can stay His hand or say to Him, “What have you done?”
We must all examine our hearts and see if we have any trace of Narcissism, or its root sin of Pride. At its core it is the self-idolatry that Adam and Eve submitted to, and which caused the downfall of ancient leaders of Israel. Our modern leaders must not bow down to its seduction, and we must each stay humble to avoid its temptation in our lives. It is much more pervasive than we would ever admit, and this spirit's objective is to keep us from walking in God's plan of sanctification for our lives by distracting us with our selfishness. We must turn away from self and towards Jesus in humble adoration. Once we are cleansed from this destructive spirit, our path to glory will be opened, and we will praise Him in immeasurable ways!

Daniel 4:37    Now I, Nebuchadnezzar, praise and exalt and honor the King of heaven, for all His works are true and faithful and His ways are just, and He is able to humiliate and humble those who walk in [self-centered, self-righteous] pride.