The Relevancy of the Old Testament & Why It's Important

I am so grateful to God for showing me the relevancy of the Old Testament. The dictionary defines "relevancy" as "legally pertinent". And since our God is legally-minded and a God of laws, it is important to understand that He gave us His laws to be seen as rules of the Kingdom of God and His way of Life -- both in Heaven and on Earth. More and more I am seeing this Truth validated by what He shows me in the New Testament. And I feel sorry for those who are still following denominational doctrines that say the first 39 Books of the Bible do not apply to us; that God abolished the Law at the Cross; that we are under a new covenant of Grace that cancels the old. Not true! The Old Testament speaks volumes of our Lord and Savior, and how He will manifest the Kingdom of God is recorded in the history of its pages.
In fact, there is so much in just the first few books of Genesis that I'd like to share some precious nuggets of knowledge that jump out at me. These three Chapters are integral to understanding the entirety of the Bible and the reason we exist.
As I've shown you in the past, Genesis 1:26-27 reveals God's act of making us in His image and placing us here on this earth to administrate His kingdom colony. We are spirit begat by Spirit. Our purpose in this life has nothing to do with what we accomplish according to the world's standards, but everything to do with how well we govern His kingdom on earth. In Genesis 2, God created man [the word ish in Hebrew] from the earth -- the name "Adam" means "ground" or "earth" in Hebrew. Then God took a rib from Adam and formed a partner for him; and Adam called her Woman [ishshah in Hebrew].  Our ancestral parents started out in complete union with our Creator, and now, thousands of years later, we are desperately yearning to return to that state of Paradise. 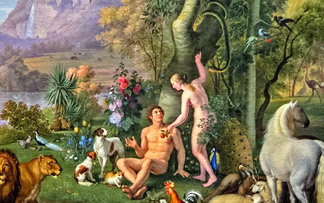 But then in Genesis 3, we see that Lucifer, who was formerly a "Shining One" and "a Light-Bearer" in the Kingdom of Heaven, became the Father of Pride and devised his own plan to win back a place of prominence in God's creation. He was able to seduce Adam and his wife by introducing a spirit of pride that provoked them to rebel against God. Their defiance of God's command to not eat of the Tree of Knowledge of Good and Evil resulted in mankind being given a death sentence and separation from the One with whom they had walked and talked. They turned their dominion of the earth [their power, control, and government] over to the devil. God confronts the couple and pronounces His punishment on Adam and the woman for their grievous rebellion. And Death became a part of the human existence.
But I want you to notice something. Even as God pronounces judgment on both the serpent and the couple, He offers the victims hope. Genesis 3:15 reads, And I will put enmity (open hostility) between you and the woman, And between your seed (offspring) and her Seed; He shall [fatally] bruise your head, and you shall [only] bruise His heel. Can you see that this is the first announcement of the Good News of a coming Kingdom of God on earth? This is the first prophecy about the Messiah (Christ), who through His death on the Cross and His resurrection would ultimately defeat Satan, the power behind the serpent, with a death blow! Hallelujah!
And for those who deem the Old Testament irrelevant, Isaiah 9:6 validates this prophecy: For to us a Child is born; to us a Son is given; and the government shall be upon His shoulder, and His name shall be called Wonderful Counselor, Mighty God, Everlasting Father, Prince of Peace. I submit to you that it is Jesus's reinstatement of God's kingdom government on Earth that is now defeating the government of Satan's kingdom of darkness!
Then there is this nugget: take a look at the progression of verses 14-20 in Genesis 3. God first addresses the Serpent with his punishment [at the same time giving hope to the woman/man and their offspring]. Then He pronounces the woman's punishment and the relationship between her and her husband. Then He tells Adam the consequences of his sin; namely, that the earth is cursed because of his rebellion and there will be an end to his life. And here's what I want you to see.... Until verse 20, the female is only referred to as "woman" or "wife". It is only after judgment has been pronounced that the woman receives her name ... Eve. Since Adam was given the authority to name all the creation on earth, he named his wife Eve, which means life-giver. He did so following the promise of Genesis 3:15, which displays his faith in God's Word. Every child born afterward would be a testament to God's promise of life to the dying human race. At some point in the history of mankind, one of Eve's offspring would crush the head of the serpent and deceiver of man!
But there is more revelation and relevance in Genesis 3:21. The Bible says, The Lord God made tunics of [animal] skins for Adam and his wife and clothed them. We have all seen the pictures of Adam and Eve with their fig leaf aprons. But that is not what the Word says. They were covered with animal hides, necessitating that animals be sacrificed for their skins, and that requires that blood be shed. This sacrifice of an animal to cover the sin of Adam and Eve can be seen in the establishment of Israel's sacrificial system for the atonement of their sins. God intentionally set up that system to point man towards the essential elements of His plan for redemption -- Death is the result of our sin; and it can only be covered by a sacrifice and the shedding of blood. But that system of God's government was temporary, a dress rehearsal, so to speak, that pointed the way to Jesus, the Sacrificial Lamb of God, who, by His shed blood, paid the price that covers our sin. 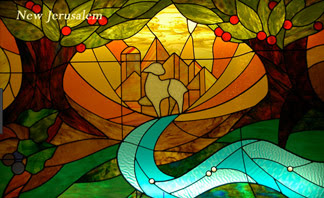 The first three Chapters of the first Book of the Bible set the stage for the rest of God's Word. They show us that man's rebellion against God and His Kingdom on earth results in separation from His Presence. They show us that the only way to reconciliation with our Creator is through the sprinkling of blood. They point the way to Jesus Christ, the Messiah, whose blood restores fellowship with our Father in Heaven. And when we look upon Jesus and His purpose in the New Testament, we must see more than the forgiveness of our sins [our salvation]. We must see that He comes to declare that the Presence of God [and His Kingdom] has once again been manifested on the Earth.
Adam and Eve were cast out of that Kingdom and barred from the Tree of Life. But Jesus came to reinstate and restore the Kingdom of God on Earth, and authorize us to once again be in charge over it, establishing His Father's government and way of Life. Those are our marching orders! And one day we will have access to the Tree of Life [again] in the New Jerusalem of the Millennial Kingdom. That is revealed in the last Book of the Bible. So from Genesis to Revelation, God reveals His plan: to establish His creation, mankind, to administrate His Kingdom on Earth. Along the way, man rebels and plan B goes into action: He sends a part of Himself to redeem mankind and reestablish His Kingdom.
In order to see the full scope of God's vision, we must give credence to both the Old and New Testaments. To ignore the biggest portion of the Bible is to have a distorted perspective. The message of the Bible is not all about us and our salvation. The message of the Bible is the purpose and intent of God's will in creating man. IT'S ABOUT HIM! Let us thank Him for His love, and patience, and grace and mercy towards us. But above all else, let us honor and glorify His purpose for us.

Revelation 22:1-2     Eden Restored: Then the angel showed me the river of the water of life, flowing with water clear as crystal, continuously pouring out from the throne of God and of the Lamb. The river was flowing in the middle of the street of the city [New Jerusalem], and on either side of the river was the Tree of Life, with its twelve kinds of ripe fruit according to each month of the year. The leaves of the Tree of Life are for the healing of the nations.

Email ThisBlogThis!Share to TwitterShare to FacebookShare to Pinterest
Labels: God's Plan of Redemption, God's Will, Kingdom of God