Jesus Is Truly Our Hope

I don't know of any better way to express the hope that Jesus represents for mankind than to share testimonies from the Ministry to which He has called me. To begin, I was pretty amazed at how quickly the calls started coming in when we returned from our vacation. It's so easy, when you're distracted with traveling and out of your routine, to become casual about the spiritual battle that is waging in people's lives. And it certainly seemed as if God has broadened our territory while we were gone!
But these are a couple of stories that remind me that no matter whether you are dealing with people you know, or strangers you've never met, Satan repeats the same lying messages, just using different methods. Let me expand on that premise...
I will call this man Benny; a middle-aged man who has been lost in the depths of hopelessness that comes with years of drug abuse -- methamphetamines, to be exact. In case you didn't know it, meth use has become an epidemic in this country, destroying the lives of countless individuals and families. It doesn't care what ethnicity you are; if you're rich or poor; young or old. Highly addictive, meth burns up the body’s resources, creating a devastating dependence that can only be relieved by taking more of the drug, leading to serious health conditions, including memory loss, aggression, psychotic behavior and potential heart and brain damage. 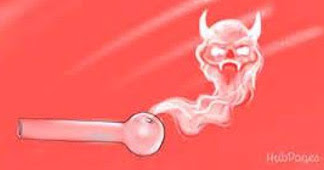 It creates a false sense of happiness and well-being; creating counterfeit confidence in a life that has been decimated. Such was the case with Benny. He had mistreated his body for so many years, and nearly lost his family. When we were called to his older brother's home to assist in Benny's deliverance, we met his wife, who is an intelligent woman, very faithful, but firm in her stand that he could not come back into their home [with their two young daughters] until he dealt with his drug problems. Of course, Mark and I knew that at the root of this self-destruction was a spiritual issue from which Benny needed to receive divine healing.
From the moment we met him, we could see his gentleness and his loving heart. He knew Jesus and believed in Him. But we could also sense the deep torment that was keeping him in bondage to the drugs. He gave us a short recap of what had brought him to this point... Nights of being tormented by a demon who was in his room, sitting on his chest, and then harassing him with taunts and accusations, inches from his face. When he decided to accept his brother's invitation for deliverance, he got in his truck to drive to his brother's residence. On the way, the demon tried to pull his hands off the steering wheel, started beating him about his head, and pulling his hair. By the time we arrived, he was nursing a bloody nose from the beating. His brother and wife were at the table and we let him talk for a few minutes to see if we could determine if he was really ready to let Jesus work in his life to set him free.
It was obvious that he was suffering and did not want to continue this lifestyle, but the Enemy had such a strong hold on him through this drug. We had to discover what was at the root of it all. So we asked him when his life began spiraling out of control? What was the heaviest thing in his spiritual backpack that he'd been carrying around his whole life? Not surprisingly, he was at first reluctant to share anything that the devil had wrapped up in layers of guilt and shame, and after some prompting, he broke down and admitted he had been sexually molested as a teenager. How Jesus hates this sin! And it is so prevalent in our culture! I'm beginning to think that it is committed against our boys at a greater rate than our girls, and I strongly believe that this horrendous sin is what Jesus is referring to when he says, "If anyone causes one of these little ones [who believe in Me] to stumble, it would be better for them to have a large millstone hung around their neck and to be drowned in the depths of the sea".
This sexual molestation was the impetus for Benny's false belief system about himself; that he was worthless, dirty, no good, unworthy of love, condemned. It set the course of his life that led to bad decisions encouraged by the lies of the devil. But when we were able to help Benny forgive his molester and others who had harmed him; to break the ungodly soul and spirit ties with these individuals and the drug dealers who had helped him disguise the pain, then he was ready to hear how precious he was to Jesus. He experienced Jesus coming into that molestation event, walking him out of that memory, and disintegrating where it took place.
We spoke life into a man who learned that he was so deeply loved by His Heavenly Father that he was worth the sacrifice of His own Son. Benny felt the power of the Holy Spirit when we laid hands on him and prayed. He heard the life-giving words that God had a purpose for his life and that his testimony could help set others free!
Benny hung his head and wept, repeating "Thank you, Jesus!" several times. He now understood that Jesus died to give him victory over the drugs, and it is time to walk in that freedom and change his life. His wife reiterated that the victory was his and up to him to develop that relationship with Jesus and walk forward in freedom. It has been a week since we ministered to him, but we have received a report that Benny is calling family and friends and telling them, "Jesus set me free!!!" Hallelujah!
The other story I want to share is of a woman I will call Karen. Karen was referred to us by a good friend; she was despondent and beaten down by her life circumstances. When I initially talked to her, I told her that we were not life counselors, and that we worked with Jesus to help people heal their inner wounds so that they could move forward in fulfilling the purposes of their lives. She was clearly unsaved and stated she wasn't against Jesus, but just wanted to try and get some "clarity about her life".

I will be honest, I wasn't too sure we were the right people for the stage Karen was at in her life, but I always know that Jesus is the answer for everything, so we were willing to meet with her. We listened to her explain the deterioration of her life, her utter feelings of desolation, loneliness, and abandonment. Then we explained that Jesus wanted to set her free from all that "baggage" she was carrying around, but she had to desire a relationship with Him.
Karen said she was interested in knowing more about Jesus but the idea of "church" was not inviting because the Christians she had met did not invoke the sense of "community" she was seeking. Mark and I were encouraged when she told us that she had once had a dream when Jesus came to her. She couldn't remember what He said to her, but she remembered the deep feeling of peace! I told her that's the Jesus we serve.  What's more, her story is not unique. Her circumstances describe nearly everyone we see... there are always incidents in people's lives that Satan uses to keep them in bondage to his lies.  Therefore, the advice we offered her is fitting for everyone to follow.
We explained that our ministry is centered on a relationship with Jesus and He is the answer. We listened to her questions about the validity of other religions and explained that those gods are very real, but are lesser and inferior gods to the Most High God of the Bible; the One True [big "G"] God. We also explained that the spirit realm is very real, and there are real spirits of depression and abandonment that are trying to keep her separated from the love of Jesus [and that peace she felt in the dream]; they want to keep her from seeking the life He offers. We asked if she wanted to begin a relationship with Jesus and she said yes, so we led her in a prayer in which she asked Jesus to forgive her of her sin and to come into her heart to become her Savior. We explained the importance of Forgiveness and we recited the Lord's Prayer together. Karen then forgave those who have hurt and abandoned her, releasing them to Jesus. We prayed over her and she wept, repeating, "Help me, Jesus". I prayed that He would visit her again in a dream and give her new words to remember; that she would be in His Presence and know He is real. I told her this was the first step in her relationship with Him and it is a journey for the rest of her life. When she left our home she said she felt lighter, and that it felt like she had "come home". Nothing represents the calling of Jesus on one's life any better than that!
I know that both Benny and Karen will be visiting us again. They both have made dramatic changes in their spiritual lives and the Enemy will try to lure them back in to bondage. I explained to both of them that they are a prize in a spiritual battle, and they can expect to encounter some of the same tactics of the devil. But they know Jesus is with them; they know the lies the devil uses and that they must fight to stay free. But, as always, it is a tremendous blessing to begin a session without hope, and then see the Beloved go home full of joy, with a new sense of their worth as a child of God. It is extremely humbling, and an honor and privilege to be considered worthy of being Jesus's ambassador. It is His power and authority, on loan to us, that allows us to hear the Holy Spirit's words of counsel as we guide people, one by one, into the Kingdom of God on earth. Thank you, Jesus! There is no greater work on this earth for me to do. I pray that mine and Mark's obedience and service continues to be pleasing in Your sight!

2 Corinthians 5:20    "We are ambassadors of the Anointed One who carry the message of Christ to the world, as though God were tenderly pleading with them directly through our lips. So we tenderly plead with you on Christ’s behalf, “Turn back to God and be reconciled to Him".
Posted by Pam Kohler at 6:30 AM