If, as a Christian, you are aware of our responsibility to steward the Kingdom of God until Jesus returns, and that we will be accountable for what we did or didn't do; or what we knew or didn't know, then you are probably well-informed about the increase in demonic activity in the world. In fact, if you are paying close attention, Satan is actually tipping his hand. You just have to be tuned in and you will see it.
For several years now, attuned Christians have seen the devil's forecasting in the entertainment industry. From our movies to our music to our TV shows, the Enemy is becoming more blatant and confident in showing his hand. After all, the Church hasn't sounded the alarm, and he is capturing so many unsuspecting souls in his net of horror and terror ... why should he be concerned that we're going to shut him down?

So, if you're like my husband and myself, you are adept at picking up the subtle clues in a song or movie plot that shows how the devil is targeting the world and luring them into accepting the occult and demonic without a fight. But imagine our surprise as we re-watched a 2009 TV episode of "Terminator:The Sarah Connor Chronicles", and the main character spoke these chilling words: "Midnight is the witching hour… if you believe that kind of thing. And most people won’t admit it if they do. Midnight is the time when the door opens from our world into the next, and we are visited by dark spirits in the shadow lands… the incubus, the succubus, the Old Hag. Visitors are known by many names, but each story bears the same marks. The demons come after midnight in the first three hours of the new day when we are alone and at our most vulnerable; in our deepest sleep and helpless. We cannot move. They lay on us, press on us, suffocate us, take from us what is most precious -- our lives, our love, our sanity, our sleep… If you believe in that kind of thing".
I will tell you that I definitely believe in that kind of thing. I have heard too many similar testimonies in our Deliverance Ministry to dismiss these assertions. But I will also tell you that we weren't watching this show expecting to get this kind of "in your face" revelation. The whole Terminator movie franchise has always fascinated us because of its predictions of a future dominated by artificial intelligence. But this particular episode of the TV spinoff caught us off-guard, and at just the right season of the year. You see, each year at Halloween, I am astonished at how much this holiday preoccupies our culture.  It is becoming as big as Thanksgiving and Christmas in our national psyche, and I am astonished at how much our adult population has adopted it. 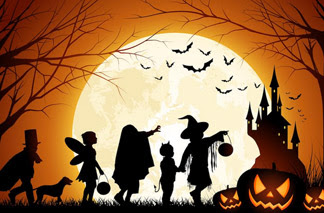 But I am here, once again, to warn everyone [Christians included] that Halloween is not the innocent celebration of costumes and candy it is made out to be. Whether a devout Christian or a non-religious secularist, most people believe that Halloween is a night of innocent fun and autumn celebrations/festivals that ALL people can share. But what is it to the Satanists and witches? I think it is important to repeat some of the information that I have presented throughout the years for those who are new to this site.
Known as "Samhain" to this latter group, Halloween is a transitional time, and an initial stage of a process in which the veil between life and death grows thin.  I found a Christian website (Logos Resource Pages) that featured an article by Pastor David Phillips that seemed to offer some straightforward information on the holiday.  Consider what the following self-declared witches had to say about the holiday... "Halloween is one of the four Great Sabbats of the witches that everyone has heard about. To witches, Halloween is a serious occasion, however merrily celebrated. It is the old Celtic Eve of Samhain. With the coming of Christianity, the Church tried to Christianize the old festival by naming November 1st as All Saints Day, or All Hallows as the old term was. Thus Samhain Eve became All Hallows Eve, or Halloween. But attempts to discourage the pagan celebrations were so unavailing that the festival was eventually banned from the Church calendar. It was not until 1928 that the Church of England formally restored All Hallows to its calendar, on the assumption that the old pagan associations of Halloween were at last really dead and forgotten; a supposition that was certainly premature."
Here's another witch's testimony: "All the Great Festivals of Paganism, wherever they may be found, correspond in common with the Solstices, Equinoxes, and other natural annual cycles of life. Most of these remain with us today, in more or less disguised form, as the so-called Christian holidays of Christmas (Yule), Easter (Ostara), May Day (Beltane), Thanksgiving (Harvest Home), Halloween (Samhain) and even Groundhogs Day (Oimelc)."
Here is what we ALL need to understand ... Witches and Satanists love Halloween. They get a lot of media coverage around this time of year. It's good P.R. for them because the coverage, as a rule, portrays them in a favorable light.  In addition, Halloween generates interest in "the craft" [as in "witchcraft"] and is good for recruitment purposes. As Craig Hawkins, Founder and President of Apologetics Information Ministries, put it: "With increasing vigor, witchcraft is coming out of the broom closet. Many witches are actively seeking public understanding and acceptance."
What should be especially concerning is the fact that the practice of witchcraft and satanism is becoming mainstreamed -- from lawsuits to allow rituals to be performed in our prison system, to Wicca becoming the fastest growing religion in our military. And I can tell you that from the Beloveds that my husband and I have ministered to, these associations and the rituals attached to them open spiritual doors that, unless closed and covered by the blood of Jesus, will render torment and oppression in a Believer's life. Furthermore, if you think Halloween doesn't measure up to being included in satanic rituals ... think again. 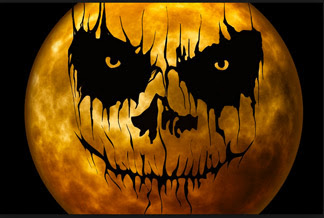 If you think I am exaggerating this or my warnings about Halloween, just listen to what a former Satanist has to say on the subject. John Ramirez is a born-again Christian; a pastor who was once, in his own words, "a general to the kingdom of darkness in witchcraft". Ramirez warns Halloween isn't just about costumes and candy – there's a much darker reality.  "It is the most diabolical demonic holiday. Sometimes people say, 'I celebrated Halloween 10 years ago, [or] I did this 15 years ago, I did this 20 years ago.' But the door's still open. You just cursed your family from three to four generations," Ramirez told CBN News. [The "this" he's talking about is the rituals and sacrificial offerings that are made to the Dark Prince on this evil night].

And that's what 21st Century people have a hard time understanding. Even though the attempt in the 6th Century to "Christianize" the holiday by calling it "All Soul's Day" in commemoration of the "faithfully departed", the original conception of the holiday [in which the souls of the dead were supposed to revisit their homes and that ghosts, witches, goblins, black cats, fairies, and demons roamed the earth], has never been excised from its celebration. And calling it a "fall harvest festival" doesn't erase its spiritually dark undertones. As John Ramirez says, "The only harvest we should be celebrating is the harvest of souls [for the Kingdom of God]".
And then there's Texe Marrs. Although a controversial New Age researcher, he nevertheless offers advice that is hard to ignore:  "Our own research confirms that on this unholy night [Halloween], witches' covens meet, drink, dance, spit out curses and spells, conjure up spirits, engage in sexual orgies, induct new members, and offer up animal and human sacrifices. (Witches have become expert at covering up these sacrifices by use of cremation ovens and the use of privately owned land preserves for disposal of bodies in deeply dug graves.)"
And lest you dismiss this notion as pure conjecture, let me share the words from a high priestess of the Church of Satan:  "As a child drawn to darker passions from birth, I always delighted in the fear and fantasies of Halloween. It gives even the most mundane people the opportunity to taste wickedness for one night. They have a chance to dance with the Devil, either stumbling, tittering and nervous in the arms of the Black Prince, or boldly, ravenously sharing in the sensual excesses and fright of others on this magical, unholy night. Now, birth and death have, for me, become inextricably interwoven into this day."
You see, it doesn't really matter what we Christians say to try to convince ourselves that the warnings about Halloween have been blown out of proportion. We need to listen to those who openly declare that they worship the dark side during this unholy holiday. They have made it the devil's holiday! And when we participate -- even in the most innocent way -- we are telling the spirit world that we are in agreement with its celebration. And in case you have any last doubts, I'm going to leave you with these chilling words from Anton LaVey, the founder of the Church of Satan, who said, "I'm glad that Christian parents let their children worship the devil at least one night out of the year."

Email ThisBlogThis!Share to TwitterShare to FacebookShare to Pinterest
Labels: Halloween