Our Authority, Free Will, and Faith

I praise God that more and more Christians are coming to the knowledge of the Power and Authority given to us by Jesus Christ. But as we in modern Christianity tend to do, we take a Biblical concept and mold it to our Western way of thinking. And especially, here in America, we have a streak of self-determination and independence running through our DNA. Unfortunately, that tends to bleed over into how we walk out our Biblical authority.
First, let us establish that Jesus was given all authority in heaven and on earth (Matthew 28:18). Next, we should understand that He gave His power and authority to all who believe (Mark 13:34). Then we need to clearly see that Jesus modeled for the Body of Christ how we are to walk in that authority. He only did what He saw the Father doing in Heaven (John 5:19); and He only said what the Father told Him to say (John 12:49-50).  How many of us Christians can say we are obedient to Christ's model?  Do we even understand the consequences if we are disobedient?
Well, let me tell you, that walking outside of our authority is a sure-fire way to run into spiritual trouble. Because besides our authority to exercise the power of God, our Father has given us another important little gift ... our free will. And when our will takes precedence over His Will, we are headed down a dangerous path. 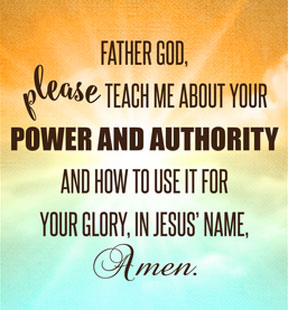 I do not write this to scare anyone from being bold for the Lord. There are times our authority will take us into some risky territory. But if we follow Jesus's model, we will be walking where our Father has laid out our path, and we will only be proclaiming what His Spirit communicates to our spirit. Any deviation from that, and we're asking for trouble.
I can confidently say that, because I have acted out of my own free will and regretted it. I have seen a direction the Lord wanted me to go, but I got out ahead of Him and let my soul overtake my spirit, expressing what my mind was dictating and allowing my emotions to take charge, instead of listening for the Lord's clear instructions.  But I have also "ministered to people who took on assignments they determined would glorify the Lord. The problem was, He didn't tell them to go there or to strike the first blow. Those self-appointed assignments led to a season of paranoia and fear for one; and serious health threats for another -- until they realized that they had not received those marching orders from the Lord, and they repented for their disobedience and moved back into alignment with God's calling on their lives.
"We must remember that "the battle is the Lord's -- not ours! Without God's specific authority to do something, we can find that we hurt ourselves more than advance His Kingdom. Probably the most familiar instance of not exercising our authority properly is the story of the seven sons of Sceva found in Acts 19:13-16, Some Jews who went around driving out evil spirits tried to invoke the name of the Lord Jesus over those who were demon-possessed. They would say, “In the name of the Jesus whom Paul preaches, I command you to come out.”  Seven sons of Sceva, a Jewish chief priest, were doing this.  One day the evil spirit answered them, “Jesus I know, and Paul I know about, but who are you?” Then the man who had the evil spirit jumped on them and overpowered them all. He gave them such a beating that they ran out of the house naked and bleeding. The seven sons of the priest, Sceva, were sincere in their desire to do the work of the Lord. Problem was, He hadn't given them instructions to take on that assignment.
Perhaps the clearest picture of someone in the Bible who understood how Christ's authority worked and how to exercise it was the Centurion in Matthew, Chapter 8: But the Roman officer interjected, “Lord, who am I to have you come into my house? I understand your authority, for I too am a man who walks under authority [and have authority over soldiers who serve under me]. I can tell one to go and he’ll go, and another to come and he’ll come. I order my servants and they’ll do whatever I ask. So I know that all you need to do is to stand here and command healing over my servant and he will be instantly healed.” The Centurion understood that Jesus walked under the authority of His Father. He also knew that he was capable of authority, but in this instance recognized that it was Jesus's authority that would heal his servant. And his faith that Jesus's authority [from Heaven] was so great that Jesus could heal from afar, earned instant healing for the servant. This was a man who understood the Heavenly Source and foundational principles of how Jesus's authority worked! 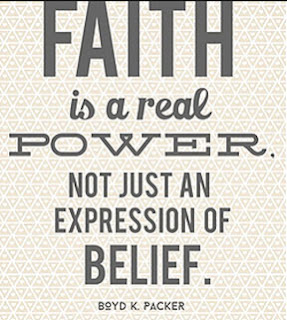 So here is another fundamental truth in the Bible: our spiritual authority is accessed through our faith; and the level of our faith determines how much authority we carry. Consider this .... In Mark 9 and Matthew 17 we have the account of the boy with seizures who was not healed by the Disciples. The father of the boy said the Disciples were not strong enough. Strong enough in what? Their faith. In fact, when Jesus hears this, He calls them a "faithless people [generation]". The father then tells Jesus, " if you’re able to do something, anything—have compassion on us and help us!” Jesus responds, "What do you mean IF?" and goes on to explain that if one believes, anything is possible. The father declares that he believes but asks Jesus to help his "little faith". Jesus heals the boy, and His Disciples ask Him why they were unable to cast out the demon, and Jesus tells them that it is because of their lack of faith -- this demon requires prayer and fasting, which in the principles of Heavenly authority, requires a greater degree of faith.
Now, let's fast forward to the Book of Acts. Christ has ascended into Heaven, and full authority has been bestowed upon the Disciples at Pentecost. Through their journey with Christ, they have advanced from using His authority as He trained them up, to now walking in their own authority as their faith has increased... The apostles were performing many miraculous signs and wonders among the people. And all the believers were meeting regularly at the Temple in the area known as Solomon’s Colonnade.  But no one else dared to join them, even though all the people had high regard for them.  Yet more and more people believed and were brought to the Lord—crowds of both men and women.  As a result of the apostles’ work, sick people were brought out into the streets on beds and mats so that Peter’s shadow might fall across some of them as he went by.  Crowds came from the villages around Jerusalem, bringing their sick and those possessed by evil spirits, and they were all healed. (Acts 5:12-16)
Their faith had increased and now they were operating at such a high level of authority that Peter didn't even have to touch someone for them to be healed -- his shadow released the power of the healing from the Holy Spirit! And notice that when the crowds brought the sick and those possessed by evil spirits to the apostles, they were all healed.... evidence of great faith and authority.
So, I hope that I've shown how important it is to listen to the Spirit when operating in our authority. We MUST follow Jesus's example and only take on the assignments we receive directly from the Father. When we are obedient to this principle, we have nothing to fear and the power of Heaven is behind us. Step out on our own, without clearance from God, and that free will decision is outside the Father's will. Secondly, as our faith grows, so will the measure of authority we walk in. Jesus has placed us in a position of authority, but the power of Heaven comes when our faith is indisputable.  It is so important that we walk in our  spiritual identity and power, with our spiritual eyes and ears firmly focused on Jesus .... being ever mindful of what He's telling us to say and do. If we can follow His model, just think of the impact we would have on the world!

Matthew 17:20     He told them, "It was because of your lack of faith. I promise you, if you have faith inside of you no bigger than the size of a small mustard seed, you can say to this mountain, ‘Move away from here and go over there,’ and you will see it move! There is nothing you couldn’t do!"