I've decided to take on this question because I have recently come to the conclusion that some in the Body of Christ may be confused regarding this issue. In our Deliverance Ministry, which involves inner healing by Jesus and Holy Spirit, I am beginning to run across devoted Christians who do not believe that Inner Healing is Biblical. I hear arguments that it has its roots in the occult, is part of New Age mysticism, and is an Anti-Christ doctrine.
I am constantly amazed at how Christians view revelation from the Holy Spirit. Just because the words "inner healing" do not appear in Scripture, or you can't give Christians chapter and verse where Jesus says, "I want you to do Inner Healing as part of the Great Commission", then it is dismissed as deception and false teaching. But I would challenge those religious people to show me where "Trinity" is mentioned in Scripture; or "Sunday School". What about "Lent", or "the Rapture"?
Arguments can certainly be made that the Bible reveals that God is three Persons in One: Father, Son, and Holy Spirit. But how is this concept derived? The title or words "Trinity" do not appear in our Bibles. Yet we are capable of understanding the concept of Trinity by taking the whole counsel of Scripture and receiving revelation of this Truth by filling our minds with God's Word and meditating upon it; having a heart willing to understand and obey. Yet mention "Inner Healing", and all kinds of labels are applied to you -- by other Christians!
I have seen it written on popular Christian websites that God wants to free us from sins of the past, but He doesn't need "visualization techniques" or "prolonged emphasis on the past to do so".  This website then goes on to say, "As we abide in Him (John 15:5) He transforms our hearts and heals us. But the key is to focus on the Lord, not focus on ourselves." I would like to offer the following Scriptures to show that God actually does use our imaginations to transform and heal us:

I pray that the light of God will illuminate the eyes of your imagination ["innermost" heart], flooding you with light, until you experience the full revelation of the hope of His calling—that is, the wealth of God’s glorious inheritances that he finds in us, His holy ones! (Ephesians 1:18)

“For this is the covenant that I will make with the house of Israel After those days, says the Lord: I will imprint My laws upon their minds [even upon their innermost thoughts and understanding], And engrave them upon their hearts [effecting their regeneration]. And I will be their God, And they shall be My people. (Hebrews 8:10)

I will agree that God does not want us to dwell on the pain of our sins, or the sins committed against us. But I would like to point out that, first, the word "minds" in Hebrews 8:10 is the Greek word dianoia, which means "the exercise of using your mind for deep thoughts; imagination". Proceeding from there, if "the eyes of your imagination" is centered in the innermost part of your heart, as Ephesians 1:8 says, then Scripture is making a connection between our minds and our hearts, where "regeneration" takes place; where we are renewed and restored --- and our imaginations play a part in the renewing of our mind and heart.
But I want to move on from here and establish that Inner Healing is actually modeled in the Bible by Jesus, and that He actually participates in each and every Deliverance session that we are involved in. Whenever Christians try to convince me that they do not see this concept in Scripture, I will point them to John 21, where Jesus heals Peter's broken heart. 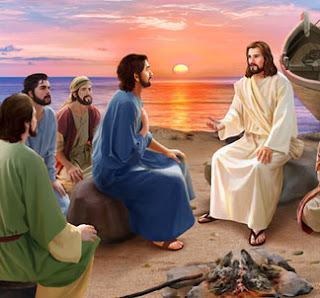 Remember that Peter had boasted that he loved Jesus more than any of the other Disciples and that he would never leave Jesus. Yet, within hours of making that claim, Peter [sitting by a fire outside the Temple walls] would deny he knew Jesus three times. Here, in John 21, the resurrected Christ appears to Peter, who is seated by a fire, and asks him three times if he loved Him. In essence, Jesus knew how to bring healing to Peter and remove the pain of his denial. Three times Peter denied Jesus, but three times he makes his confession of his deep love for Christ. By the third time, the “crowing rooster” inside Peter had been silenced, and now he was ready to be a shepherd for Jesus’ flock. He was regenerated, restored, and healed.
Again, in John 4 we see Jesus interacting with the Samaritan woman at the well, and engaging in conversation with her, where He gently heals her from her past sins of multiple marriages, and most likely adultery. She has been shunned by her community and lives in shame and guilt, finding it necessary to come to the well in the heat of the day when she will not have to mingle with the rest of "polite society". But Jesus meets her where she's at, speaks to her about her sin, and tells her that what she's looking for [the Anointed One] is right there with her, and she can drink from His Living Water and never thirst [for acceptance] again. He then tells her, "From here on, worshiping the Father will not be a matter of the right place but with the right heart. For God is a Spirit, and He longs to have sincere worshipers who worship and adore Him in the realm of the Spirit and in truth.” Did you see that? He wants people to engage Him in the spirit realm! And this woman was healed of her shame and guilt as she shared the Good News of the Messiah with her city. God was faithful to use her to reach others because she was honest to tell others that Jesus knew everything she'd ever done and still loved her. 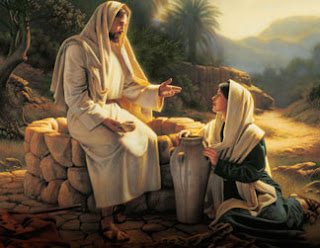 But Jesus has ascended to sit at the right hand of the Father, so we who are in the 21st Century don't have the blessing of having Him appear to us in the manner He did with Peter and the Samaritan woman. Yet, He does appear to each and every person who comes for ministry at our table! He is invited to be in our midst and He comes to them to heal and restore them, and He comes when they use the eyes of their innermost heart, their imagination. And He is real in that moment! He's every bit as real as when He appeared to Peter and the woman at the well!
But the spirits of Doubt and Unbelief are alive and well in the Christian community. My fellow Believers are too willing to dismiss even these Biblical accounts of inner healing, because they have developed wrong theology about the impact of sin on the human experience -- the marks left on souls, hearts, minds, spirits, and bodies. They have developed wrong theology about suffering, the supernatural, and Biblical spirituality. In essence, they have developed a belief system that denies that Jesus can still heal today as He did in the Bible. But what hope does that kind of "religion" offer those who suffer from rage, anger, bitterness, self-loathing, shame, guilt, or any of a number of ways the Enemy attacks us? And I'm talking about both Believers and Unbelievers! 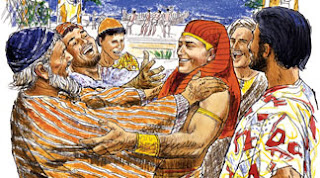 So often in our Deliverance sessions, Unforgiveness is the root of wounded and shattered hearts, souls, and relationships. We see in Genesis 50, that the power of forgiveness can mend broken relationships as Joseph forgives his brothers for selling him into slavery, and extends the grace of God. Jesus establishes the need for forgiveness in the Lord's Prayer, and we have seen the miraculous effects of Him renewing the spirit of a person who has been bound in spiritual chains to Unforgivenss when the person is able to speak forgiveness over someone who has hurt them and release them to Jesus to be cleansed by His blood.
I believe that there is no better example of the need for Inner Healing in the Body of Christ than the story of Tamar. As you will recall in 2 Samuel 13, Tamar is raped by her half-brother Amnon, and then victimized a second time by her brother Absalom, who tells her to keep silent about it and "Do not take this to heart". Then the Bible says she remained secluded in her brother Absalom's house and "lived as a desolate woman".  Does the modern Church do the same thing -- expecting Christians to swallow their hurt and pain, and deny it? What does that do to people who carry these emotional and mental wounds? Do you think they might be living in desolation [misery and despair] even though they are saved?  And doesn't it do an injustice to our claims that we Christians walk in freedom?
In Isaiah 61, the prophet proclaims, "The Spirit of the Lord God is upon me, because the Lord has anointed and commissioned me to bring good news to the humble and afflicted; He has sent me to bind up [the wounds of] the brokenhearted, To proclaim release [from confinement and condemnation] to the [physical and spiritual] captives, and freedom to prisoners". This is Old Testament prophecy of the ministry of Jesus to come. It is important we see that the Hebrew word for "broken-hearted" is shabar, which means "earthen vessels shattered in pieces"; and the Hebrew word for "bind" is chabash, meaning "to wrap firmly; to rule, to stop".
Now take a Luke at what Jesus says in Luke 4:18, "The Spirit of the Lord is upon Me, because He has anointed Me to preach the Gospel to the poor; He has sent me to heal the brokenhearted, to preach deliverance to the captives, and recovering of sight to the blind, to set at liberty them that are bruised,...". Here, the word for "brokenhearted" is the Greek word suntribo, meaning "harm inflicted by a quick blow [to an earthen vessel]"; and "heal" is the Greek word iaomai, meaning "spiritual healing, to make whole". He does more than "bind", He heals!
I think it goes without saying that there are many among us who are earthen vessels who have been shattered to pieces by sin -- our own sin (as in Peter and the Samaritan woman) and sin that has been committed against us (as in the stories of Joseph and Tamar). But the important question becomes this:  Does Jesus want us to live in desolation or self-hatred or unforgiveness? Didn't He die to set us free from those bondages? And isn't it time we take a good look at our theology to see if we are denying Christ the opportunity to come to us and set us free? Take another look at those Scriptures in Ephesians and Hebrews. I believe that you will see that it is Biblical to use our imaginations to effect regenerated hearts, and it is all done by inviting Jesus and Holy Spirit to be present in our midst to help set us free. Jesus modeled it for us. It's time we recognize Inner Healing as Biblical, and walk in wholeness and complete freedom.