Is There A Change In The [Spiritual] Air?

I had just finished writing Wednesday's post, and having no clear word from the Holy Spirit on what I could write on behalf of the Lord, I began perusing some of the Christian websites to see if I received any kind of prompting.  I will admit that there are days that I find it difficult to write.  I never want to write for myself, but there are some times when I have a hard time hearing from God, and I struggle with making sure that what I write glorifies Him.  After all, I know that is why I have been given some degree of writing talent; it's not about me! 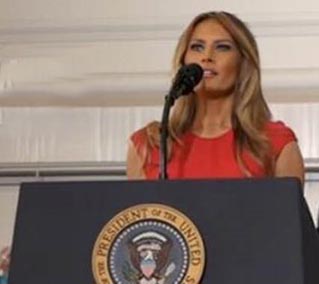 Then after discerning that we Christians need to offer up intercessory prayer on behalf of our nation, I find two seemingly small stories, but both having the potential to have a huge impact on how God might view our nation.  The first may seem as if it serves a political interest, but there is a much deeper implication. At a rally in Melbourne, Florida, First Lady Melania Trump was on stage to introduce her husband, the President.  But before fulfilling that duty, she simply stated, "Let us pray", and then recited the Lord's Prayer. No fanfare; no long, winding speech paying homage to a picture of a "universal god" acceptable to all religions ... this was a humble and reverent prayer to the Christian God, Jehovah.
At first, this may seem as if I am blowing the importance of her prayer out of proportion.  But if you regard the recent efforts of the Ecumenical Movement to bring all religions and ideologies under one umbrella, then what the First Lady did made a very powerful statement.  You may not know this, but at the first Ecumenical Assembly held in Amsterdam in 1948, the motto 'ONE WORLD -- ONE CHURCH' was adopted. Since then, we have seen a disintegration of the supremacy of Jesus Christ and Christianity in our national dialogue. Recent Inaugural prayers have invoked the "name of the Almighty", instead of "in the Name of Jesus Christ", and "under God" was often left out of the Pledge of Allegiance.
By praying the way in which Jesus instructed us, Melania Trump established very clearly that she was praying to the One True God, and that she is a Christian.  Of course, there were the same old detractors, calling for separation of Church and State, but where in the Constitution does it say that our elected officials cannot be Christian? And then there were the pathetic people on social media who bashed her for her accent and "butchering" of the Lord's Prayer. Do you think that any of these people are the same ones who are screaming loudly for the acceptance of immigrants into our country? The hypocrisy is not only revolting, but deceitful.
And I would like to say that I actually prefer this prayer over the intercessory prayer that I wrote in yesterday's blog.  It says all there is to say ... It declares that His Name is Holy; separate and set apart from other "little g" gods. It asks for God's Will to be done here on earth, just as it is fulfilled in Heaven. It speaks of repentance and forgiveness; and asks that we be delivered from temptation and evil. And it finishes with the declaration that this earth belongs to Him -- It is HIS Kingdom, and all Power and Glory belong to HIM, and Him alone.  No, what Melania Trump did on that stage may not have meant much to the millions who criticized her, but I can guarantee you that she struck a mighty blow for YHWH in the spiritual realm!
Now, the second piece of news that I discern of great significance was barely covered by the news outlets. It came and went, with little interest by the designers of social commentary.  It was the death of Norma McCorvey, better known as Jane Doe in the Roe v. Wade case that legalized abortion in this country.  The importance of her life was not that she became the symbol of Pro-Choice advocates, or that she represented modern feminism, or even that she was a picture of protecting women from the consequences of rape.  The truth is that she was never raped, nor did she have an abortion.  The truth is that she was at times both a sympathetic character and a foil for those who could use her troubled past for their purposes -- to push abortion as a matter of urgent importance to American women. 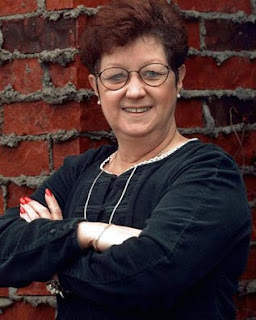 And she was an easy target for the devil.  According to one article written about her, "Her grandmother was a prostitute and fortuneteller. Her father was a television repairman, her mother an alcoholic. Part Cajun, part Cherokee Indian, and raised as a Jehovah’s Witness, Norma Leah Nelson was 10 when she took money from the gas station where she worked to run away from home. After that, her education came from reform schools until the ninth grade. By the time she was 15, she had been sexually assaulted by a nun and a male relative of her mother’s. At 16, she married an itinerant steel worker, Woody McCorvey, who, she says, beat her. She left him and returned to her mother’s house in Dallas with plans to raise her unborn child alone".  There is so much legal authority for the devil to use her as his pawn that she made a perfect scapegoat for his diabolical scheme.
There followed another out-of-wedlock pregnancy, a foray into lesbianism, and finally, the third pregnancy, which resulted in an abominable alliance with Lawyer, Sarah Weddington, who had had an abortion, herself, but who needed a down-and-out "victim" to push her case all the way to the Supreme Court.  In fact, McCorvey's only real contribution to the case was signing the initial affidavit without even reading it, and she “was never invited into court. I never testified. I was never present before any court on any level, and I was never at any hearing on my case . . . I found out about the decision from the newspaper just like the rest of the country".  Furthermore, McCorvey alleged that she didn't really understand what was involved in an abortion; she did not understand that it resulted in the end of a life. She claimed that her lawyer, Weddington, told her "it's just tissue". But Norma McCorvey suited the purposes of Weddington and the devil, and the rest is history.  Through her initial compliance, over 59 million babies have been aborted in this country since 1973 ... and still counting.
If there is any victory in the life of Norma McCorvey, it is that she reportedly had a sincere spiritual conversion in 1995, repented for her compliance in Roe v. Wade, and became a fierce opponent of the abortion movement.  Although, her pro-life stance and attempts to have the case reopened and overturned never resulted in undoing the sacrifice of millions of unborn babies, at the end of her life, she stated that "no woman had the right to act as her own God", determining whether a baby lived or died.
So I am left wondering if these two events involving these two women will have any real impact upon the spiritual battle that wages over the United States. Will the death of Norma McCorvey, a tragic figure manipulated by the spirit of Molech and his willing human accomplices, signal a shift in the spiritual winds?  With her premature death at the age of 69, might we hope for the death of the abortion rights that carry her name?  And does the invoking of the Biblically-endorsed Standard for Christian prayer by the First Lady of this nation, indicate a rebirth of Christian power and authority? Can we look upon this simple gesture as the willingness of those put in positions of Leadership at the behest of God, to honor and follow Him in the administration of this nation? History will tell. Until then, let us never lose sight that there is a battle on earth for men's souls and spirits.  The battle is the Lord's and He has already defeated Death. Let us stand firm, looking forward to the Day He returns to defeat evil once for all.

Proverbs 10:28     The hope of the righteous brings joy, but the expectation of the wicked will perish.