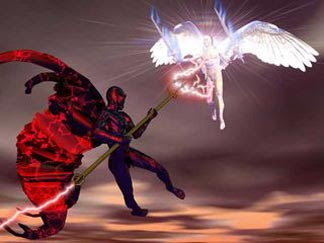 Since, lately, I have been led by the Spirit to focus on the spiritual realm, I thought I would tackle one of the most controversial couple of verses in the Bible.  During this Age in history, many Christians are discerning that we are in what Jesus called "those days", or "the end"; when "the beginning of sorrows" and "great tribulation" shall befall men on the earth.  We commonly accept these days as "The End Times".
Historians, eschatologists, scholars, and well-intentioned Christians have searched the Bible for years for prophecies from the Lord; Scripture that will give us a clue as to how to recognize when the Judgment of Christ will bring horrific persecution, death, famine, and ultimately the return of our Lord.  Although we are not to worry about the time or day, it cannot be denied that Ezekiel, Chapter 38 is often cited as one of the most explicitly prophetic Books in the Bible.
If you are the least bit interested in eschatology, I'm sure you've heard a variety of explanations for this particular passage.  Here are just a few, which have been well-documented on watchmanbiblestudy.com:
1.  Hashemite Kingdom Theory: The Islamic Nations will come against Israel either by an Iraqi-led, Jordanian led, or Turkish led coalition. The enemy from the north refers to the areas of Syria, Turkey, and Iraq. These Islamic nations make up the lands occupied by Magog, Gomer, Togarmah, Meshech and Tubal.
2.  Caucus Theory: Gog and Magog are the Arab nations in an alliance with the Muslim republics of the former Soviet Union. This theory leaves out most of Russia, and includes only the southern part.
3.  All Europe theory: Gog and Magog are the sons of Japeth thus the originators of the European races.  Gog and Magog therefore indicates all of Europe. This is not a widely held theory and I could find little support for it.
4.  Russian Theory: The Hebrew word ‘rosh’ in verse 3 is identified with Russia, ‘Tubal’ with Tiblisi or Tobolsk and ‘Meshech’ with Moscow, therefore Gog and Magog refers to Russia. This is one of the most commonly held views and is based on a different interpretation of the Hebrew word Rosh (used as a noun rather than adjective), similarities in the pronunciation of words, and the Greek translation of Rosh referring to a tribe of people found in what is now Russia. (Given Russia’s obvious involvement in giving arms and technology to Iran and Syria, I believe they will be a big player in the attack if not actively involved in it.)
5.  Indo-European Theory:  Gog and Magog include the nations descending from Japheth: Russia, the Caucasus (Turkey), Iraq, and the Islamic republics of Central Asia. The coalition is an alliance of Arab nations, Muslim republics, Georgia, southern Russia and the Black sea area.
It's also possible that you have heard combinations of these different theories, and even heard Russian President Vladimir Putin identified as Gog.  This theory is often proposed because God says in Ezekiel 38:15. And you [Gog] shall come from out of your place in the north parts...".  However, "the north" or "the north parts" has often been understood to be the heavens, and in this case, the second heaven, where satan and his fallen angels and demons live.  But, for centuries, that hasn't stopped people from trying to relate specific humans and geographic locations on the earth, when dissecting Ezekiel 38.  But in taking counsel from the Holy Spirit in regards to the spiritual war in the heavens, I am beginning to see a different picture.
What God and the Holy Spirit are showing me can best be explained by what might, at first, appear to be a confusing description of Gog and Magog on Wikipedia:  The first mention of the two names occurs in the Book of Ezekiel, where Gog is the name of an individual and Magog the name of his land; in Genesis, Chapter 10, Magog is a person and no Gog is mentioned; and in Revelation, both Gog and Magog appear together as the hostile nations of the world.
OK, now I'm going to ask you to follow me and connect the dots; try to consider this possible interpretation... Let's start with Genesis, Chapter 10, in which Magog is listed as a son of Japheth, who, himself, was a son of Noah.  Genesis 10:5 tells us that from these men, "the nations were separated and spread into their lands, every one according to his own language, according to their constituent groups (families), and into their nations"...  so the fact that Magog is usually understood to be a nation or country makes sense; having been named for the descendant of Noah who was given that land.  Just think of Washington, D.C. named for George Washington, or America, named for the explorer Amerigo Vespucci.  Naming a land after a specific person makes sense to me.
But then who is this Gog that our God is prophesying against?  In Ezekiel 38:3, he is called "the chief ruler of Meschech and Tubal".  In other versions of the Bible, this verse reads "O Gog, the prince of Rosh, Meshech, and Tubal".  Before we try to identify Gog, let's clear up the discrepancy in the use (or lack of) the word Rosh in that verse.  Some versions of the Bible translate the Hebrew word ‘rosh’ in verse 3 as a noun referring to a place in Russia. The least credible support for this view is that Rosh sounds like the modern-day name Russia and Meshech sounds like Moscow. In this translation they treat rosh as a proper name. Other versions of the Bible translate ‘rosh’ as an adjective, a disjunctive form of grammar, that indicates a pause.  So, verse three would read:

“Behold, I am against thee, o Gog, the prince, {pause} chief of Meshech and Tubal”

“Behold, I am against thee, o Gog, prince of Rosh, Meshech and Tubal.”

It is not as important to me to understand where Gog is chief ruler or prince, as it is to know the identity of who Gog is.  I can accept that he rules over the nations of Meshech and Tubal, and I can agree, without any problem, that those nations may comprise parts of modern-day Turkey, southern Russia and Iran.  It is important to know who this Gog is, and why the Lord God is against him.
So, now I'm going to finally tell you the understanding that I have come to, after much study and prayer.  I believe that Gog is one of the demonic rulers (or princes) that satan has assigned to particular nations to carry out his evil directives.  Once again, I feel that's why Paul made such an effort in Ephesians, Chapter 6, to spell out for us that we do not fight against flesh and blood!  (Could he have been telling us to not try to identify flesh and blood men as these enemies?) These rulers and princes are the forces of spiritual wickedness that coordinate the game plan and align demonic forces on the battlefield of each nation.
And I do not believe they are constrained by time or place.  Gog has obviously been assigned to govern and administer the nations of Meshech and Tubal at a time when they will be unleashing their armies on Israel.  Since I often find that the Bible expresses overlapping and dual prophecies -- a word from the Lord that is specific to an ancient historic event, but that also applies to an End Times scenario.  In this case, the Old Testament prophet Amos says, Thus the Lord showed me, and behold a swarm of locusts were coming, and, behold, one of the young devastating locusts was Gog, the king.
Then in the New Testament, in Revelation, Chapter 9, the Apostle John is given a vision of the Fifth trumpet being sounded, the bottomless pit opening, and the power of the locusts descending upon man to torture him.  In verse 11, John says, And [the locusts] had a king over them, which is the angel of the bottomless pit, whose name in the Hebrew tongue is Abaddon, but in the Greek tongue hath his name Apollyon.  It is well understood in the 21st Century that this king will be the Anti-Christ.  So, it is certainly possible, and it is my opinion, that the "devastating king of the locusts", that the prophet Amos saw is the same king of the locusts that John saw.  "Gog" could just be the designation of his title or position, such as President; and at the End Times he will be known by his proper name, Abaddon.
Nonetheless, I think we must consider that Gog is a demonic spiritual king [chief ruler or prince] who isn’t limited in the length of time he lives or functions.  He can rule over many nations at different times; simultaneously or throughout the centuries.  But I think it is clear that he is an agent of the devil; with specific duties to battle against God's plan of reconciliation.  I believe that when God commanded Ezekiel to set his face against Gog and prophesy against him, the prophet was being instructed to battle in the spiritual realm against this demonic ruler, and to tell him the Lord God was against him and would defeat him.  That was in the Old Testament.  In this New Testament Age, I contend that we can do the same thing ... declare to the demonic forces in the spiritual realm, in the Name of Jesus, that God is against them and they are defeated.
I'm sure that this may be a new and very difficult concept for you to accept, since it is virtually never discussed in the Church today.  And maybe, you are one of those Christians who doesn't feel it is necessary to understood Old Testament prophecy.  But the God who spoke to, and instructed, Ezekiel is the same God who wants to speak to us today through His Word ... all of His Word!  For me, it is a matter of knowing that His character never changes.  So if God was against the demonic rulers in the spiritual realm in Ezekiel's time, He is against them today.  And if He asked Ezekiel to set his face against that demonic ruler, I believe he wanted the prophet to take a stand, with God by his side, and announce the defeat of the evil entities.  I believe His command and His desire is for us to do the same.