The Rulers Of This Present Darkness

Once again, the weekend finds me needing to break the pattern of blog posts.  The deaths of innocent people on the French Riviera, along with the martial law and military coup declared in Turkey compel me to make a short statement about how I view these world events.
First of all, the fact that the Muslim murderer in Nice followed nearly step-by-step instructions posted on an Isis terrorist website, is evidence that this was a terrorist attack.  Secondly, I am writing this on Friday afternoon, and the news regarding the coup in Turkey is fluid; by the time this commentary posts on Saturday morning, more details will be known.  At first glance, it seems that the military is attempting to remove the President of Turkey, Recep Erdogan, and reestablish what they are calling "the rule of law and human rights".  Sounds good ... but then late last night the coup was declared "unsuccessful", and this morning's news states that civilians reclaimed Turkey from their own military after President Erdogan urged them to "keep on owning the streets".  We will have to wait to see how this all shakes out.
Now, those opinions are based on my physical worldview. My Biblical worldview is another thing.  It has become increasingly clearer to me as I make the effort to study the multi-dimensional implications of Biblical history, that the actions of nations and their leaders are really spiritually dictated and determined. 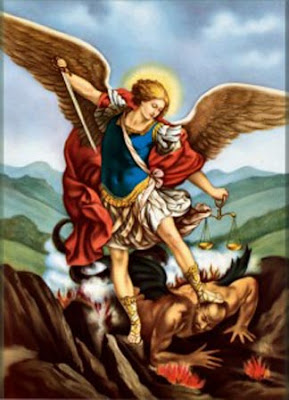 Take the familiar account in Daniel 10, when a heavenly messenger (likely the angel Gabriel)  explains to the prophet Daniel why he is so late in answering his prayer summons.  Gabriel tells Daniel he was on the way, "But the prince of the Persian kingdom resisted me twenty-one days. Then Michael, one of the chief princes, came to help me, because I was detained there with the king of Persia."  It is well understood by Biblical scholars that the prince of Persia is a reference to an evil spiritual entity that wielded authority over the ancient kingdom of Persia. And Michael is the archangel in charge of protecting Israel.
Throughout the Bible we see nations and their leaders affecting what happens to the nation of Israel and God's chosen people.  But the Word also tells us that many times, it is God who is in control and using those leaders and nations as instruments of not only His blessings and discipline, but His severe Judgment.  In Habakkuk, Chapter 1, God relates His intention to raise up Babylon, a “ruthless” and “dreaded” nation, to achieve His purpose.  Keep in mind that God did not create the ruthlessness of Babylon, but He uses it and controls it to bring about His ultimate Glory.  Follow me one more step, and you see in Ezekiel, Chapter 28, an amazing description of satan as the Prince of Tyrus.  Then in Romans 13, we have Paul telling us that " the one in authority is God's servant for your good. But if you do wrong, be afraid, for rulers do not bear the sword for no reason. They are God's servants, agents of wrath to bring punishment on the wrongdoer."
Can you begin to see that these world events are not simply the random acts of bad people?  Can you discern that Satan is using his rulers and powers and spirits of wickedness to cause this present darkness we are seeing come upon the world?  We cannot hope to dispel such evil by human means.  We must pray and partner with God to battle the spiritual forces that are behind these nations and leaders.  The Prince of Persia in the Book of Daniel was not a flesh and blood man who was fighting with the angel Michael.  I believe he was one of the angels who fell with Lucifer, and had been given the nation of Persia to rule from the spiritual realm on behalf of satan.
Without question, I believe that every nation on earth has been given such a ruler by satan, a prince to try and control the destiny of that nation, and move into the "win" column for the devil.  It is up to us to pray and ask God to send His heavenly armies, with angelic leaders like Michael, to thwart the enemy's plans.  As of this morning, the prince of France and the prince of Turkey are gloating over the chaos they are causing.  Let's be like Daniel ... the Bible said that he "mourned" what he was seeing happening in his world, and he began to pray.  It seemed like ages before he got an answer, and it was the angel Gabriel who told him,  "From the first day that you set your heart on understanding this and on humbling yourself before your God, your words were heard, and I have come in response to your words."
Don't waste another minute trying to figure all this out yourself ... we need to appeal to God with fervent prayer and ask for Him to respond.  And then have the faith of Daniel, knowing that He will!

Colossians 2:15    "When He had disarmed the rulers and authorities [those supernatural forces of evil operating against us], He made a public example of them [exhibiting them as captives in His triumphal procession], having triumphed over them through the cross."