The Portals Are Opening

The boldness with which satan is showing himself on the world stage is blatant and unrestrained.  By now, you may have heard about the bizarre and strange "celebration" commemorating the opening of the Gotthard Train Tunnel, which is billed as the longest and deepest train tunnel in the world.  It is a feat of engineering, stretching beneath the Swiss Alps, and its completion is being hailed by world leaders this past week as unifying Europe.  This feat was observed at a ceremony that has been characterized as nothing less than a satanic ritual.  I have to agree.
You can view it for yourself by clicking  here, but I want to warn you it is a disturbing video, and you will be left with no doubt that the godless of the world are summoning Lucifer from the abyss.  In an avant-garde, theatrical production world leaders, dignitaries, and common people are introduced to what Russia Today called a spectacle of "naked torsos and horned beasts".  The production begins with a military formation of "zombie-fied" miners, marching towards a large screen featuring the rocky formation of the Swiss Alps.  As the miners perform a near tribalistic act of breaking through the rock, they simulate climbing and falling off the mountain as the hole in the mountain is dug. 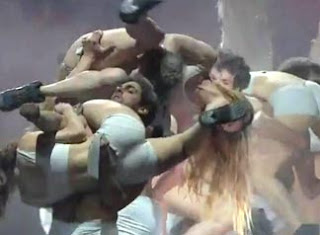 It's not long before you get the sense that the workers are getting more and more animated, soon disrobing  and engaging in orgiastic and riotous movements.  Incorporated within this display of digging the tunnel is the Swiss folktale about the Devil's Bridge.  According to historian Meinrad Lienert, the tale tells how the people of Uri, Switzerland recruited the Devil for the difficult task of building a bridge across the pass of the Schöllenen gorge, a critical point above the Gotthard Train Tunnel route.  The devil requested to receive the soul of the first thing to pass the bridge in exchange for his help.  To trick the devil, who expected to receive the soul of the first man to pass the bridge, the people of Uri sent across a goat by throwing a piece of bread, and the goat was promptly torn to pieces by the devil.
Enraged at having been tricked, the devil went to fetch a large rock to smash the bridge. While taking a break from exhaustion from the task of carrying the rock back to the bridge, a Christian woman secretly marked the rock with a cross. The devil was then unable to pick up the rock, and was forced to abandon it and flee. This 12 metres tall, 220 ton rock was named “The Devil’s Stone”,  and in 1972, the stone was moved 127 metres and is now situated at the entrance of Gotthard Road Tunnel.  The folktale represents a defeat for the devil. 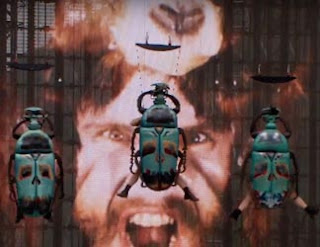 But the ceremonial celebration on stage this past week was obviously meant to represent a victory for satan.  As the actors portraying miners continue with digging the tunnel, an image of the devil appears on the screen, as if coming out of a portal (the tunnel) with fire surrounding him, and an actor takes to the stage as a goat with rams horns.  Simultaneously, Egyptian scarab beetles were suspended in front of the screen upon which satan had appeared.  The symbolism of these scarab beetles was obvious:  It seemed to the ancient Egyptians that young scarab beetles emerged spontaneously from the burrow where they were born. Therefore they were worshipped as "Khepera", which means "he was brought forth."  At this point in the ceremonial production, the devil has been summoned out of the abyss; and dances on stage with trumpets blowing.  The message is clear ... Lucifer is coming out of the abyss.  The orgy of dancing and debauchery tells us that people are proclaiming him and inviting him to come out of the tunnel.
This is spiritual warfare front and center!  This is an in-your-face satanic ritual, with powerful leaders of the Western World in attendance and endorsing his appearance.  Italian Prime Minister Matteo Renzi, Switzerland’s President Johann Schneider-Ammann, Germany’s Chancellor Angela Merkel and France’s President Francois Hollande stood and applauded the ceremony which showed satan's involvement in this world throughout history ... from ancient paganism and druidism, to the Industrial and Technology Ages, as the dancers portrayed bestiality, trangenderism, and transhumanism. 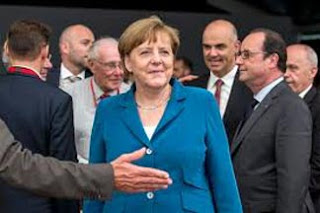 A ticking clock appeared on the giant screen, as the dancers groveled before the goat-ram devil, bringing him offerings and bowing down at his feet.  This was not so much a dedication to the opening of the historic tunnel, as it was a worship service for the devil.  It's not being disguised or hidden.  As I said, world leaders were openly applauding the opening of the tunnel to the abyss and the appearance of the devil.  It was a ritualistic ceremony in which they took part; it was a summoning of the devil.
Where is God's Church, and are we expending as much time, energy, and initiative to call forth our Savior?  This event in Switzerland may seem like bizarre, crazy European-style performance art, but I guarantee it has satan's hand all over it!  I believe he is instructing his followers to come out into the open because he is nearly ready to make his appearance.  So we see the Satanic Temple getting bolder in performing their rituals in public.  We see the unveiling of a Baphomet statue with people cheering "Hail Satan," as they rush up to pose with the scultpture of a winged Baphomet with a human body and a goat’s head, and a little boy and girl gazing upon it with devotion.  We see the "nation's first state-sanctioned Satanic Ceremony in history" being carried out on the steps of the Michigan state capitol.  We see TV shows glorifying a suave and debonair character named Lucifer, and we are seeing increased satanic performances at the Super Bowl, Grammy's and even Country Music awards shows!
If all this has not come up on your radar, it should!  We need to start paying attention to the rise of satanic rituals in our entertainment venues, in world events, and in our public squares.  We need to be preparing ourselves for the spiritual battle of our lives.  I believe that the deception in the Church [that there will be a Pre-Tribulation rapture of the saints] will leave many Christians vulnerable and victims of the devil's evil plans.  We must become as diligent and tireless as our enemy in this spiritual battle.  We need to be on our knees asking Jesus to come quickly with His heavenly host to defeat satan and his army of demonic soldiers.  As evidenced by the satanic worship ceremony in Switzerland this past week, the sounds of the battle are within earshot, and the spectacle of the war between Jesus and Lucifer is in view.  The devil's troops are openly preparing and shouting for his appearance.  Are you raising your voice to the heavens for Christ's return?  Are you seeing the approaching battle, and are you readying for it?  Pray for endurance, strength, and wisdom to stand on that day ... it's not far away.