No wonder the Church is so ineffective today, and Christians cannot seem to "unite with one mind".  We no longer seem to be "of one heart and soul".  Those terms are how the Early Church was described in Acts, Chapter Four.  And when I say "early" Church, that's exactly what I mean.  These terms were used to describe the body of believers shortly after the Day of Pentecost when the Church was born.  In the midst of their tumultuous beginning, the new believers were unified in their faith and commitment to the teachings and deity of Christ.
The Sanhedrin were agitated and frustrated at the preaching of Peter and John about this man Jesus, whom they had recently crucified.  They thought they had quelled His grassroots movement and silenced His influence, and here were these men continuing to spread His seditious message.  So the Book of Acts tells us that the ruling class delivers their own message to the followers of Christ:  "We have the power. If you are allowed to preach, as you have been preaching, it is because we have permitted you to do it.  Anytime we want, we can arrest you and carry you off to jail.  We demand that you be silent about your disruptive faith"! 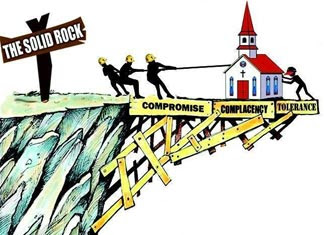 2 Corinthians 10:5    "We are destroying sophisticated arguments and every exalted and proud thing that sets itself up against the [true] knowledge of God, and we are taking every thought and purpose captive to the obedience of Christ,"