Call me naive, simply skeptical, or perhaps it is time to dust off my tin foil hat, but something doesn't seem right about this sudden and nearly hysterical reaction to the Zika virus.  Does anyone else wonder why this epidemic seemed to appear out of nowhere?  I mean, just a month ago, it was barely on the radar... and now the World Health Organization (WHO) has declared the virus a "Global  Health Emergency", and the U.S. Center for Disease Control (CDC) is advising protected sex after a case of Zika in Texas was determined to have spread through sexual contact. 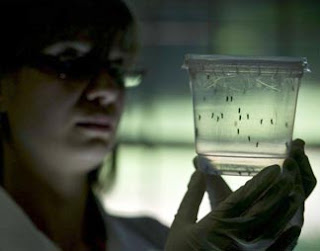 Something just doesn't seem right ... like there is a hidden agenda (again) and we are being manipulated for some other purpose(s).  So, here are the issues that have me concerned:  First of all, there is a report that appeared on the Natural News website, which stated, "Now we may be seeing the first wave of the horrific destruction that can be unleashed by self-replicating genetically modified organisms. The Zika virus, now spreading with unbridled ferocity, appears to have been caused by the release of genetically engineered mosquitoes that scientists hoped would sharply reduce malaria infections."
The report continues:  "The Zika virus outbreak currently gripping the Americas could have been sparked by the release of genetically modified mosquitoes in 2012," reports The Mirror. "The insects were engineered by biotechnology experts to combat the spread of dengue fever and other diseases and released into the general population of Brazil in 2012... The Aedes aegypti mosquito sub-species that carries both the Zika virus and dengue was the type targeted with genetically modified mosquitoes."  That would explain why the symptoms of the Zika virus are described as "resembling dengue fever".
Needless to say, if this report is true, something went horribly wrong.  These GMO mosquitos were created by incompetent scientists and released by unconscionable biotech corporations, with no concern about the effects on the ecosystem or the human population.  And this leads to my second concern.  So-called experts are now linking the Zika virus outbreak to a condition called microcephaly, in which an infant’s skull is too small for his or her brain, often crushing or otherwise severely damaging the brain.  A high percentage of children with this condition suffer some sort of neurological disability or retardation, and most will suffer convulsions, and many children born with microcephaly die young.  Was there ever any consideration of the effects upon humans if bitten by one of these genetically modified mosquitos? 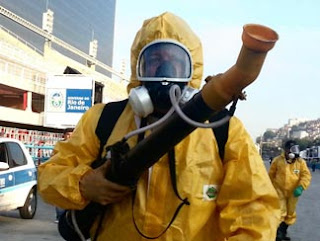 So, what are the solutions?  Brazil, which has been particularly hard hit by the virus outbreak (more than 4,000 cases of infants born with microcephaly to mothers with Zika in their bloodstream in the past year, according to Breitbart.com) is now fumigating with pesticides in advance of Rio de Janeiro's upcoming Carnival season.  Since there is now suspicion that the virus is spread through sexual contact, and Carnival is always suspect for sexually transmitted diseases, the Zika virus is one more health concern that must be addressed, and it is being met with a vast chemical fog.
But unprotected sex and pesticides are not my only concern about the rapid spread of this disease. The abortion industry is now taking advantage of the outbreak by pushing abortion as a solution to the problem of microcephalic births.  As Breitbart News reported January 29, Planned Parenthood has taken advantage of fears surrounding the Zika crisis in Brazil to promote the expansion of unrestricted abortion throughout Latin America. The abortion business has especially targeted those Latin American countries with restrictive abortion laws, such as El Salvador, in hopes of using the crisis to ease existing abortion legislation.  But Planned Parenthood is not the only one pushing this agenda.   Now Women on Waves, an organization which uses ships to offer safe abortion services outside the territorial waters of countries where the procedure is restricted or forbidden, has announced that they will begin serving areas affected by Zika.
I am sorry, but my spirit is telling me that all this happened too fast, and seemed too coordinated.  Maybe I'm just a little too suspicious by nature.  But when the cause is a genetically engineered carrier and the acceptable solutions are spraying with chemicals or readily-available abortions, then something smells rotten to me!  All we need now is a new vaccine to come on the scene, and I will know for sure that it is all contrived for our destruction.  Please, God, show us Your truth!  The evil schemes of men are about to overwhelm us, and we need wisdom and the strength to endure!

Isaiah 30:1     "Woe to the rebellious children," declares the LORD, "Who execute a plan, but not Mine, and make an alliance, but not of My Spirit, in order to add sin to sin;"