It's About More than the Game

Tomorrow is a big day in America.  Whether you are a die-hard sports fan or not, chances are you will be watching the Super Bowl.  In fact, it is estimated that over 117,000,000 people will watch the game between the Carolina Panthers and the Denver Broncos in the comfort of their homes, while another 100,000,000 people are expected to descend on the San Francisco Bay area to attend or celebrate the milestone that is Super Bowl 50.
And there's enough hoopla to surround this game to make it spectacular --- will Peyton Manning go out on top, or will Cam Newton's youth and extraordinary talent carry the day?  Both are worthy of discussion, but today I want to focus on a player that won't be on the field tomorrow.
Charles "Peanut" Tillman is the veteran Carolina Panthers cornerback who suffered a series of injuries to his ACL during the season.  A full tear of the ligament means that he will be cheering on his teammates from the sidelines.  Although his career as an outstanding football player has brought much-deserved recognition, I think it is his heart as a man that merits further acknowledgment. 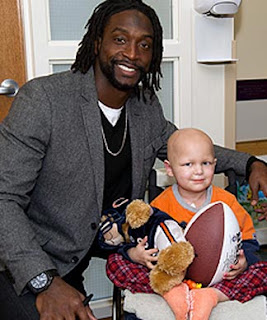 In 2014, Tillman was awarded the Walter Payton NFL Man of the Year award, which is given annually by the National Football League honoring a player's volunteer and charity work, as well as his excellence on the field.  But this is a man that has made his life about more than football.  To begin with, he is an author.  He wrote The Middle School Rules of Charles "Peanut" Tillman to help kids, like himself, overcome the traumas of childhood.  With his father serving in the United States Army, Tillman attended 11 different schools domestically and internationally, and the book features the defining childhood stories of a young, well-traveled boy nicknamed “Peanut,” who had to deal with racism, adapt to constant relocation, and endure the divorce of his parents.
Reviews of the book were consistently glowing ...  "appeals to the young sports fan with a book that goes beyond player statistics and gets to the heart of what makes them great!" ... A teacher writes, "I have often had students share dreams of becoming professional athletes. The life lessons in this book demonstrate that achieving that goal takes hard work and perseverance. Talent in and of itself are not enough; it takes character."
But author and football star aren't the only hats Tillman wears.  After his daughter was diagnosed with cardiomyopathy and received a heart transplant, Tillman and his wife, Jackie, established the Cornerstone Foundation, which enriches the lives of chronically and critically ill children by providing them and their families with access to iPads, notebook computers, DVD players, portable Play Station game systems, and other electronic handheld games, to pass the time during recovery and treatment.  (For a list of the various programs the Cornerstone Foundation oversees, click here. )
As if that is not enough, Tillman recently announced that he would raffle off an all-expenses paid trip to tomorrow's big Super Bowl game.  Proceeds from the raffle will benefit yet another of his charities, the Tiana Fund, which provides assistance to economically at-risk persons or families-in-need in the Chicago area.  This program aims to strengthen their ability to care for themselves, enhance their stability and security, and improve their quality of life or their ability to contribute to the community.
As you can see, Charles "Peanut" Tillman has been inspired by his faith and family.  He has persevered and carved out a lasting legacy for himself, both on and off the field.  So, while he may not be playing tomorrow, and he won't be spotlighted during or after the game, he has left a mark on those whose lives he has directly touched.  He is a fine example for both the game of football and the human race.  And that makes him a champion to me, no matter the outcome of the game.