A Threat To Mankind Of Its Own Making 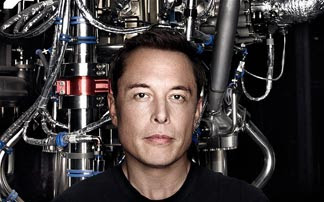 I found it rather amusing, yet chillingly scary, that Elon Musk and his tech giant buddies have pledged $1 billion to save humanity from destruction by artificial intelligence.  That's right, they just came right out and said it... they believe that there is a very real danger that human-level AI might one day decide that we are no longer necessary, and commit to destroy us.
That may sound like the oft-repeated storyline of science fiction movies, but apparently they feel it is a real enough threat that they are sounding the alarm and hope to keep big companies like Google or Facebook — both of which have huge artificial intelligence operations — from getting too much power from “super-intelligence systems”.  Of course, there are the really fringe conspiracy theorists who worry that governments may also use the power of AI to oppress their citizens.
So, that you get a clear picture of this situation, Elon Musk, who made his fortune from PayPal, is joining forces with other tech entrepreneurs to establish a $1 billion investment fund for researchers to pursue applications with a positive social impact and to try to stay one step ahead of the technology.  It is their fear that AI systems communicating among themselves could eventually control entire transport networks and national economies.  So, along with Indian tech giant Infosys and Amazon Web Services, he has set up OpenAI, a nonprofit company that will back research into novel uses of AI and share the findings.
Their stated goal is to ensure that someone is looking at the pros and cons – free from the financial constraints of research and development departments at the likes of Google or IBM that have spent billions of dollars on research.  But I find it rather ironic that Elon Musk and his collaborators will share the data that their companies generate with the AI firms. That will mean, for instance, that everything on Reddit could be given to the robots to help them learn.  Musk will also hand over data from his projects, including Tesla’s self-driving cars and SpaceX’s rockets.
So, am I missing something?  Why would you hand over mountains of data to fight a takeover by robots --- to other robot companies?  Doesn't that defeat your objective?  Why give them more technology information?  I mean, Stephen Hawking is on record for warning that we may face an “intelligence explosion”, as machines develop the ability to engineer themselves to be far more intelligent.
Then there is Dr. Stuart Armstrong, of the Future of Humanity Institute at Oxford University,  who has predicted a future where machines run by artificial intelligence become so indispensable in human lives they eventually make us redundant and take over.  And he says his alarming vision could happen as soon as the next few decades.
Here is a pretty good analogy that Dr. Armstrong uses to get his point across:  "[For now] humans steer the future not because we're the strongest or the fastest, but because we're the smartest.  When machines become smarter than humans, we'll be handing them the steering wheel."  And because we think we're so smart, Armstrong envisages machines capable of harnessing such large amounts of computing power, and at speeds inconceivable to the human brain, that they will eventually create global networks with each other - communicating without human interference.
In other words, machines, computers, and robots now carry out specific tasks designed for them by humans.  But when they can operate without human interference, and at speeds that we cannot fathom or understand, then that is when they will be able to take over those entire transport systems and national economies that were mentioned previously, along with financial markets, healthcare systems and product distribution.  It won't just be that they will eliminate our jobs.  They might quite possibly decide to eliminate us!
Dr. Armstrong warns that the seemingly benign instruction to an AI to "prevent human suffering", could logically be interpreted by a super computer as "kill all humans", thereby ending suffering all together.  Furthermore, an instruction such as "keep humans safe and happy", could be translated by the remorseless digital logic of a machine as "entomb everyone in concrete coffins on heroin drips".
An even scarier scenario is that as we develop these super computers, it will be impossible to determine whether a machine is developing in a benign or deadly direction.  Just think of the movie franchise Terminator.  And if you think it is as simple as writing a moral code by which machines could operate, just stop for a second and think about that.  The human race has debated for centuries on what constitutes acceptable moral boundaries, and we haven't agreed yet.  What makes us think that we can come up with a universally accepted set of instructions by which all machines will operate?  We can't even decide what is right and wrong!
So while the Elite and the scientists and the technology giants debate the pros and cons of advancing the interaction between artificial intelligence and human beings, we are inching towards what all the writers of fiction that was based on imagined future scientific or technological advances have portrayed ... the cataclysmic moment when the human race is faced with its own distinction at the hands of the very devices we have created.  That's what happens when you become your own god and forget that you, too, have been made to serve a Creator.  Conspiracy or not; fiction or not --- it is real enough that the Elite of the world are willing to give up a portion of their fortunes to stop it. That should tell you something.

Isaiah 47:10    You were secure in your wickedness; you said, ‘No one sees me.’ Your wisdom and knowledge led you astray. You said to yourself, ‘I exist, and there is no one else.’