It may not be the media's Top Story, but the trial of Morgan Geyser and Anissa Weier, two 12-year-olds from Waukesha, Wisconsin, should be a warning for every parent.  If you will remember, they are the two adolescent girls accused of luring their friend into the woods and stabbing her 19 times, in their admitted attempts to please Slender Man, the latest dark entity to take possession of the imaginations (and deeds) of our youth.  The victim, thankfully, survived and crawled out of those dark woods to be rescued by a passing bicyclist.

The reason this trial has received attention from the press is not because it is a question of innocence or guilt -- the girls have admitted doing the crime, and show no remorse.  The attention comes from an appeal to have the case tried in juvenile court, where the girls could receive a maximum sentence of 5 years for the crime; or in adult court, where the trial is currently scheduled, and the girls could receive a maximum sentence of 65 years.
Of course, the question of a plea of insanity seems the natural path for the defense attorneys, although apparently the evidence points to a "well planned-out and thought-out crime."  But here's what I think everyone is missing ... the primary focus should not be on the trial and the change of venue or court.  Why is no one taking a good, hard look at who these girls were trying to please, and why?  I think the Police Chief of Waukesha got it right when he said, "This should be a wake-up call for all parents.  The Internet has changed the way we live. It is full of information and wonderful sites that teach and entertain. The Internet can also be full of dark and wicked things."  And that brings us to Slender Man. 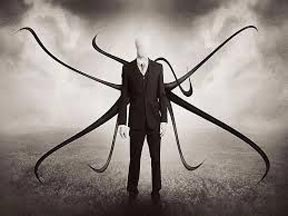 Who is he?  Slender Man appears to have been introduced to the internet world on an online forum contest asking for "fake" supernatural photographs—images so convincing that they would pass as the real thing in other online paranormal forums. Eric Knudsen submitted two black-and-white photos of an impossibly tall, thin and faceless creature stalking children.
The legend of Slender Man morphed and grew as people contributed to his story, writing fan fiction and creating their own forged photos in a kind of modern-day, tech-fueled folklore. Dressed in a black suit, Slender Man has black tentacles protruding from his back. He can stretch his arms to inhuman lengths and is often pictured lurking in leafless forests or behind unsuspecting children. Legend says he can cause memory loss, coughing fits (referred to as “slendersickness) and a litany of paranoid behaviors. He can remove your organs, impale you on a tree or stalk you slowly and drive you to madness. Slender Man is now a facsimile of the Puritan devil: He is everywhere, every day, a specter of our anxieties about raising children in a world where technology reigns and the lines between reality and fantasy grow dimmer.
But is he fantasy?  News sources such as ABC News, The Christian Science Monitor, and legal experts on Fox News, all refer to him as "a fictional character".  In fact, the Fox News TV host suggested that Geyser and Weier were hypnotized by this "strange fictional character that we know has produced this strange weird following (among young adults)."  She then went on to report that one doctor who examined them said one of the girls had a very early form of schizophrenia.  And as I have studied spiritual warfare over the last year, I have come to understand that as being a demonic spirit of "double-mindedness".
People who suffer from schizophrenia, or double-mindedness, will be unstable in nearly every area of their lives, never having any peace about who they are or what they can (or have to) accomplish.  For those who say that Christians need not be worried about this, let me remind you that James said that a double-minded person is unstable in all his ways -- and he was speaking to the saints (James 1:8)!
So what does this have to do with two 12-year-old girls in Wisconsin and their abnormal obsession with Slender Man?  Apparently the girls found him on the internet and believed he was real, offering themselves as "proxies", or representatives, thereby proving to skeptics their dedication to him and his existence.  They wanted to prove themselves worthy to him, and to do that, they would have to kill someone.  Naturally, this makes everyone from the news media, to the legal profession, to the average citizen question the mental state of these girls.  It should! 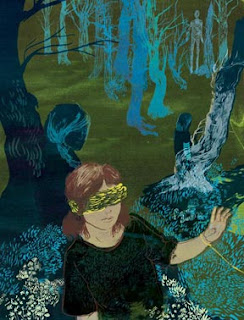 But why is no one willing to accept the possibility that Slender Man could be a clever innovation of the devil to invite our impressionable young people into a world of delusion, mind control, and absolute evil?  Do you doubt that the Enemy can infiltrate our technology, or that the internet is a viable and practical tool for him?  When these young girls -- or anyone, for that matter -- open themselves to the suggestions of evil entities, they invite the devil in.  And that's exactly where I think Slender Man gained his foothold.  Remember the online forum contest that invited people to submit their creepy paranormal inventions?  That was an open door invitation for Satan to enter the internet sphere and begin to lure young and impressionable minds.
But he doesn't just send a spirit of double-mindedness on its own.  He couples it with spirits of rejection and rebellion to attract young people who are misfits or particularly subject to such emotions.  At the core of the rebellious personality is the root of bitterness and repressed anger and stubbornness.
Still doubt that the girls could have invited demonic spirits into their subconscious?  When questioned by police, the girls expressed regret mixed with cold-blooded intent. “I believe it’s ending a life, and I regret it,” Weier said about the attack. “The bad part of me wanted her to die; the good part of me wanted her to live.”  Sounds like double-mindedness to me.
When Geyser was asked what she was trying to do when she stabbed [the victim] Geyser stated, ‘I may as well just say it. Kill her.’”  She then told police she was sorry, adding, “It was weird that I didn’t feel remorse.”  When you are controlled by the devil, remorse isn't exactly a character trait.  Unfortunately, I'm afraid that our inability to identify this crime, and many others, as the result of demonic influence will cripple our understanding of who and what we are fighting.  To prove my point, here is a statement by Frank Ochberg, a clinical professor of psychiatry at Michigan State University and leading expert on violence and trauma:  “We are intrigued by the oddity, the horror, the irony of little girls doing terrible things. It doesn’t go with the age or gender."  That's because it is not of this world, or anything that our human brains can comprehend!  Trying to understand demonic oppression and influence through the lens of childhood and adolescent development will never help us deter these kinds of wicked events.
Until we wake up to the overwhelming opportunities we have given the devil to insinuate himself into our lives --- to pervade, penetrate, and permeate our minds and emotions, if you will -- then we will never recognize the truth of the threat we are placing ourselves and our children under.  You may think Slender Man doesn't exist; that he's not flesh and bone, and that he is simply make-believe.  But he may very well be the manifestation of a demonic force from the spiritual realm, and when your child stumbles upon him on the internet, you better pray that they don't click that mouse and invite him in.

Thanks to a Newsweek article that provided the concise and explicit facts of this crime.

1 John 4:1   "Beloved, do not believe every spirit, but test the spirits to see whether they are from God, for many false prophets have gone out into the world."