What Is The Purpose Of The Pope's Visit?

I need to begin this blog by making it clear that it is not my intention to offend or wound those of the Catholic faith.  Indeed, I am not questioning your faith or belief in God... that is something that we share.  But if you read this blog with any amount of regularity, then you know that I am disparaged of the shape that Jesus's Church is in ... and that includes all churches, including the Catholic Church.  And not being a Catholic, I do not invest allegiance or loyalty to the Pope as my intercessor.  I do not judge those who do; I simply follow a different path.  I choose to adhere to the commands and voice of my Lord through His Holy Word in the Bible. 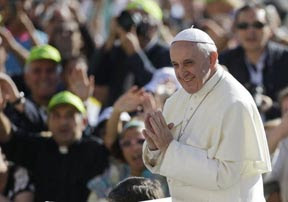 1 John 5:4    "For everyone who has been born of God overcomes the world. And this is the victory that has overcome the world—our faith."

Email ThisBlogThis!Share to TwitterShare to FacebookShare to Pinterest
Labels: Faith, The Bible, The Church, The Planet