The Lord's Feasts: The Day of Atonement

We are now approaching the holiest day of the Jewish New Year, the Day of Atonement.  Known as "Yom Kippur" in Hebrew, it offers great prophetic insight into the Second Coming of the Messiah, the national restoration of Israel, and the final judgment of the world.  Beginning at sundown this Wednesday, September 23rd and continuing through sundown on Thursday, we have the opportunity to glorify God for His grace and mercy in forgiving our sins.
The Day of Atonement is a holy day; it's a Day of Mercy for the forgiveness of our sins and is to be a day of fasting and rest.  We are to call to mind the two great atonements given by the LORD:  1) for those among the nations who turn to Jesus (Yeshua) for cleansing and forgiveness, and 2) for the purification of ethnic Israel at the Great Day of the Lord when the Messiah, their King, returns at the end of ages to execute His Judgment and Justice, and Judah shall be saved.
Historically, both the Torah and the Bible state that Yom Kippur was the only time when the High Priest could enter the Temple's Holy of Holies and call upon the Name of YHVH to offer a blood animal sacrifice for the sins of the people. This "life for a life" principle is the foundation of the sacrificial system and marked the great day of intercession made by the High Priest on behalf of Israel.
We should be able to see that these ancient ceremonies are God's rehearsal for when He sent His Son as a blood sacrifice for us.  As modern-day Christians we are to celebrate the fact that Jesus is our High Priest who interceded on our behalf and paid the debt we owe God for our sins against Him.   So, as I have stated so often, these are not the Jews' Feasts, these are the Lord's Feasts and the appointed "signs, times and seasons" that He tells us to be watching for.
Yes, Scripture tells us that we do not know the day or the hour, but we are to be aware of the times so that we are not surprised, like when a thief in the night approaches.  Jesus, Himself, tells the Church at Sardis (in Revelation 3:1-3), that He will be as a thief in the night to those who are not watching for Him.  If we know God's appointed times and can understand their prophetic meanings and what they are rehearsing, we will not be caught unaware. 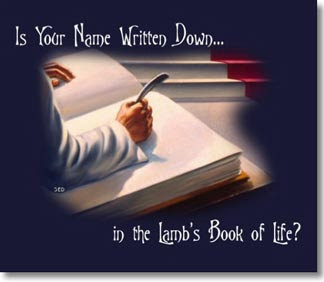 In traditional Judaism, the day of Yom Kippur marks the climax of the ten day period of repentance called the "Days of Awe."  According to the sages of Jewish tradition, on the Feast of Trumpets, the destiny of the righteous, are written in the Book of Life, and the destiny of the wicked are written in the Book of Death.   Revelation 20:12 tells us And I saw the dead, the great and the small, standing before the throne, and books were opened. Then another book was opened, which is the Book of Life; and the dead were judged according to what they had done as written in the books [that is, everything done while on earth].
From the time of the Feast of Trumpets, most people will not be inscribed in either book, but have ten days -- until Yom Kippur (Day of Atonement) -- to repent before sealing their fate.  Those of us who are saved and risen to be with the Lord are already written in the Book of Life.  The unsaved (both dead and living) will take part in the Ten Days of Repentance. On Yom Kippur, then, every soul's name will be sealed in one of the two books.  That should be a sobering fact for every soul ever created!
The significance of this day (Day of Atonement) for us New Testament believers is that God loves us SO much that He has even given us the day we should fast, pray and seek His face before we have to stand in front of Him, face-to-face.   Yet, like the ancient Israelites, if we belong to Him, we can rest in the knowledge that Christ is the Sacrificial Lamb that paid the price for our sins, and we will be pardoned.
The rituals and traditions of this day are both historical and symbolic for the Jews.  They are interesting and have been part of the Jewish life experience for centuries.  For a full understanding from that perspective, you can read the full exposition on the Day of Atonement at the Hebrew4Christians website.
For now, I would like to be perfectly clear -- I do not pretend to be an authority on how God wishes us Christians to observe this Holy Day.  I can only say that for me, I honor the Jewish traditions and history, and celebrate the common ground that we share through the Torah and Bible.  Personally, I am cognizant of the rehearsal that this day represents for the prophetic future, and I want to follow my God's commandment to observe these Feast days for all generations.  But my husband and I are careful to avoid the "legalistic" or "ritualistic" tenor of the Hebrew Roots movement.  We want to avoid the "man-made" rituals and aspects of the Jewish faith, just as we wish to refrain from those in the Christian faith.  Whether it is the ceremonial law and legends of the Talmud and Mishna, or the denominational doctrines and theologies of the Church, man has done a pretty good job of convoluting God's message.  We simply want to honor His original intent as spoken in His Word.
So, we will observe God's Day of Mercy by fasting, resting and reading our Bible, reminding ourselves that those who trust in God's salvation understand that our ultimate "rest" is provided to us by Yeshua, our great High Priest.  He presented His own blood as a sacrifice for our souls at the cross; simultaneously presenting his sacrifice before the Father in the Holy of Holies in the Heavenly Temple.  We rejoice in the sealing of our souls with the Holy Spirit, and our names in the Book of Life.  And we look forward to the return of our Lord and Savior on some future Feast of Tabernacles, and we will celebrate the "rehearsal" of that event in just five days.  I can honestly say that the turbulence, violence, and uncertainty of these days in which we live seem insignificant in light of these holy Feast days.  I thank God for  revealing to me that His Feasts are worthy of my attention, and for opening my eyes to their prophetic meanings.  What an awesome God we serve!

Isaiah 53:6    "All of us like sheep have gone astray, Each of us has turned to his own way; But the LORD has caused the iniquity of us all To fall on Him."
Posted by Pam Kohler at 7:00 AM