Churches: Know What Is Coming!

I read with interest, a story on The Blaze that related an incident in a town a little over 100 miles southeast of Dallas, Texas.  A man walked into the Texas church this past Sunday afternoon dressed in camouflage pants, tactical vest, boots and a camouflage helmet. A pistol rested in his waistband.  The man, Rasheed Abdul Aziz, asked to speak to the pastor; he needed some prayer, he said.  It was after 1 p.m., and the morning's church services were long over, but as usual, there were meetings going on, children playing in the fellowship hall, and a smattering of people milling about.
The pastor, John Johnson III, was in the conference room, and as he recounts their meeting, "Every hair on my neck just stood up.  It was almost like you could feel the presence of just negative energy."  According to the pastor, Aziz almost immediately became irate, ranting that he was a “man of Islam” who had demons chasing him and was instructed to “slay the infidels” and kill any Christian or Jew who did not abide by the teachings of Islam.  Pastor Johnson says Aziz told him, "People are going to die today."
Fortunately, this story has a positive ending.  Telling Aziz he would pray with him, and also wanting to get him a cool drink, the pastor calmly left the room, and those in the church were quickly ushered to safety.  “Immediately my mind went to the fact that I knew we had several children and young members that were playing and running in the fellowship hall. I mouthed to them, ‘This man has a weapon, I need you guys to go.’ ” Another vigilant member of the church had already called 911, and Aziz was later arrested in a nearby subdivision with felony possession of a firearm. 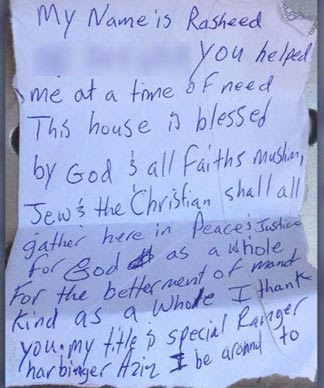 But sometime between his appearance at the church and his arrest, a note was somehow slipped under the church's front door.  A deacon found it Monday morning, and this is what it said:  My name is Rasheed Abdul Aziz. You helped me at a time of need. This house is blessed by God & all faiths. Muslim, Jew & the Christian shall all gather here in Peace and Justice for God as a whole for the betterment of mankind as a whole. I thank you....
Pastor Johnson said “that note was in stark contradiction to what he did in deed and statement.” Johnson further stated that he is grateful that God gave him the mindset and clarity to be able to defuse the situation.  And then he said something interesting.... "It was as if we had trained, but we hadn’t."
So what are we to make of this situation, beyond the obvious?  It is clear that we may be seeing the beginning of attacks on Western Christian churches; attacks on churches like those we have seen by Islamic radicals in the Middle East.  But what about what specifically happened during the event?  What about the negative energy the Pastor felt in the room the moment Aziz entered?  What about Aziz ranting that he had demons chasing him and he was instructed to "slay the infidels"?  And what about the Pastor's comment that "it was if we had trained...but we hadn't".  What do you think all that means?  Are you willing to write it off to clear-headed action by the Pastor; or blind luck, perhaps?
I thought it was interesting to read the comments after the article.  A large portion of them commented that their church members were armed and ready to defend the church, and encouraged others to do the same.  There were a few who credited the avoidance of tragedy to the pastor's full-time work with troubled youth as a student services intervention specialist at a nearby school. He’s also a former parole officer and has been trained in crisis prevention, verbal de-escalation and working with mentally ill offenders.  Still others wished to invoke the sentiments that love conquers hate, and it was the right man at the right place at the right time.
But I only saw one comment that I think hit the nail on the head.  Only one person saw it as the manifestation of spiritual warfare!  All the elements were there!  There was the double-mindedness of a man whose mind was ultimately controlled by demons.  He had received his marching orders to "kill any Christian or Jew who did not abide by the teachings of Islam", and he had somehow managed to deposit a note at the church in which he claimed the house had been blessed by God.  But whose God?  And notice that he identified himself as "Special Ranger Harbinger Aziz."  In the Arabic world "harbinger" often means visionary.  To me, he seems to be saying that he is bringing an oracle of authority, claiming that faith of Islam will incorporate the Jew and Christian into their system "for the betterment of mankind."  And let's not forget the negative energy that entered the room with him; palpable and real; and the sense that the Pastor had as though he had been part of some well-orchestrated plan in battle.  All this points to demonic activity and combat in the spiritual realm.
I don't know what prayers that Pastor prayed in those few harrowing moments with Aziz, but I know they were spoken out loud.  I also know that the spoken Word causes an effect in the spiritual realm; the Word has active consequences among the angels of God and Satan's angels.  It sets things in motion and imposes the Authority of Christ (through the Holy Spirit) over the dominion of Satan.  Our actions and words, orchestrated in the Name of Jesus, allow us to play our part as overcomers -- both in the spiritual realm and on earth.  So, yes, physically taking up arms can offer protection in the moment; but we must become more knowledgable and proficient in arming ourselves for spiritual warfare.  With the Authority that comes from Christ, we can call upon the Power of the Holy Spirit to help us wage war against our Enemy; keeping in mind that the battle and the victory are the Lord's ... and just as the good folks in Bullard, Texas now know; the war is coming to us!

Hebrews 4:12    "For the Word of God is living and active, sharper than any two-edged sword, piercing to the division of soul and of spirit, of joints and of marrow, and discerning the thoughts and intentions of the heart."