Where Are Your "High Places"?

As I watched the Republican Debate on CNN Wednesday night, I wondered how many Americans  were hoping that a clear winner would emerge; the one man (or woman) who could lead us out of this  morass of degeneration and degradation that has become America?  Although I do not want this to become about my own political opinions, I must say that I was shocked to find that an overwhelming majority of Americans thought Trump championed this country's values and aspirations better than any of the other candidates.  It is now clear to me that the ability to execute verbal judo counts more than substance.  I get it ... the voters in this nation are tired of "business as usual" and are excited to see a non-conformist take it to the D.C. Establishment.  But are we looking in the wrong places for our redemption and recovery?
The Libertarians look to the Constitution as the appointed document of this nation; it is the standard by which they think this nation should be ruled.  Most Americans are going to place their bet on a specific human leader to guide us toward a better future.  And nearly all Christians will find their security and hope in Jesus Christ through regular and uniform worship at their local church.  I contend that we may all, in one form or another, be in danger of refusing to abandon our "high places". 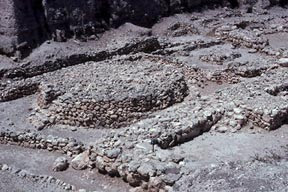 What am I talking about?  In order to understand where I'm going with this line of thought, you must consider the Biblical history of the kings of Israel.  We are all familiar with God's First Commandment: "Thou shall have no other gods before Me".  This was especially important to the success and blessings of the nation of Israel, because as they entered the Promised Land it was inhabited by the Canaanites, a people who were exceedingly wicked; and the essence of their wickedness was their worship of idols.  Their abominable idol worship (including the sacrifice of infant children in ovens to a god named Molech) was carried out at what they called "high places".  Before anyone thinks I am accusing them of worshipping idols or evil gods, let me explain why this subject of "high places" has caught my attention.
The core purpose of a high place was to be a location for worshipping deities, or idols, other than Jehovah God.  God had clearly told the Israelites that they were to 1) worship only Him, and 2) He was establishing the manner in which He wanted to be worshipped, as well as the specific place (Jerusalem).  Idolatry is associated throughout the Old Testament and the history of the nation of Israel with "high places", where idolatrous worship was carried out "on the high mountains and the hills and under every green tree." (Deuteronomy 12:2).  Furthermore, He instructed all the kings of Israel, both the Northern and Southern kingdoms to "utterly destroy" all the places where these false idols were worshipped.
Even King David's own son, Solomon, who we are told loved the Lord and followed in the statutes of his father, was tempted to sacrifice and burn incense at the high places (1 Kings 3:3).  This began a tragic pattern, which most assuredly led to the division of the nation of Israel.  All the kings of the Northern Kingdom offered sacrifices on the high places and appointed false priests.  Although the Bible tells us there were righteous kings, such as Asa, who attempted to make reforms and establish Jerusalem as the center of worship, he could not bring himself to destroy the high places.  The result:  the Northern Kingdom was taken into captivity by Assyria and the tribes scattered across the globe.
The Southern Kingdom did not fare much better.  There were only a handful who got rid of the high places and idols, but they did not get rid of the false basis for worshipping them.  Only two, Hezekiah and Josiah, "utterly destroyed" the high places, and the tribe of Judah eventually was taken into Babylonian captivity for 70 years.  So you see that the leadership of this divided nation was a mixture of what was true and false.  The lesson is clear:  When you begin to depart a little from God's path, you will get farther and farther away from His ways the longer you go in that direction. 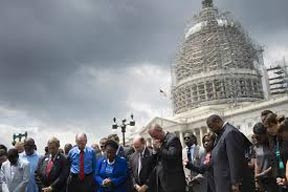 And that brings me back to our current state of affairs in this nation.  Are we examining ourselves to see if we are worshipping idols and setting up "high places" as sacred places or positions?  Has the Constitution become a "high place"?  What about the White House, Congress, or the office of the Presidency?  What about our church buildings, or our doctrine, or our denomination?  Even if we are committed to worshipping the True God, have we made our attendance at the church building every Sunday a "high place"?
For sure, neither the Constitution or a man called "The President" can deliver us from our idolatrous ways, but for those Americans who do not know YHWH, you can see how easy it would be for them to put their faith in these false idols.  But what about us Christians?
Every Christian knows Matthew 18:20 by heart:  For where two or more are gathered together in My Name, I am there in the midst of them.  But here's what many don't know ... the Greek word translated "gathered together" is sunago, and its literal meaning is "to be led together".  So a better translation of Scripture would be For where two or more have been led together.... but led by Whom?  The Church has done a pretty good job of teaching us what it means to be born again.  But how many know that their worship is to be led by the Holy Spirit -- not the Sunday school teacher, not the choir, not the Pastor.
I believe that the true spiritual essence of Matthew 18:20 is Jesus saying His appearance in our midst is not dependent on where two or more are gathered (the church building), but who is leading the gathering (the Holy Spirit)... wherever it may be.  It is not my intention to condemn all church buildings and their inhabitants.  I certainly believe that there are Holy Spirit-led worship services being conducted in church buildings across this nation.  But the emphasis should be on the presence of the Holy Spirit among the gathering, not the gathering being in the presence of a church building.
When the Apostle Paul wrote to the Church at Ephesus, the Church at Corinth, the Church at Ephesus, etc., he was writing to a gathering of people meeting together in someone's home, being led simultaneously by the Holy Spirit in worship of their Lord and Savior -- not to a congregation in a building conducting an organized service of 20 minutes of singing, a 20-minute sermon, and the passing of the collection plate.  So could it be that some Christians have made our modern church building a "high place"; a destination at which they are comfortable with its rituals and sets of rules?  Are we cognizant that God does not authorize any other basis for Christians to come together but the basis of being led by the Holy Spirit into the name of Jesus?  Any other place -- any other basis -- is a "high place".
Just like the ancient nation of Israel, the United States is in need of serious reformation.  As invested as we may be in the next Presidential election, I do not think that we should be focusing our worship at the "high place" of the Presidency.  But neither will God restore this nation by the simple act of attendance every Sunday at a church building.  The key issue for us, as Christians, is this:  Where has God chosen to put His Name?  The answer is not in a building, nor in a nationality, nor in a denomination, nor in a particular human leader.  God has placed His name in one Person.  That Person is Jesus Christ.
Where are we authorized to meet?  "Into" the name of Jesus. We are to gather around the invisible Person of Jesus, who meets us when we are led together by the Holy Spirit into His name.  When we, as a nation and individuals, repent of worshipping "high places" of our own choosing, we will remove barriers that have been holding us back from fulfilling our calling as God's people in the world.

Many thanks to the teachings and Biblical commentaries of Derek Prince (1915-2003).  After reading his book, "Pulling Down Strongholds", I found myself applying it to our political process and the modern-day Church.

Leviticus 26:30      "I will destroy your high places [devoted to idolatrous worship], and cut down your incense altars, and heap your dead bodies upon the [crushed] bodies of your idols, and My soul will detest you [with deep and unutterable loathing]."

Email ThisBlogThis!Share to TwitterShare to FacebookShare to Pinterest
Labels: Faith, Our Culture., Politics, The Bible