This is a small, short story that will most likely be here today and gone tomorrow.  But I thought I would share it with you and shine a light into this dark world.  We have reason to hope!

Texas City, Texas will never be known for its beauty or its cosmopolitan flair.  It is largely an oil refinery town and an important component in our Gulf Coast shipping industry.  Historically, it played a huge part in supplying our nation's war effort in WWII after enemy submarines had almost completely stopped the shipment of petroleum products to friendly countries from the Middle East, South America and Southeast Asia.   And on a trivial, but personal note, Texas City was the place where I first tasted fresh ocean shrimp for the first time; it was such a revelation that shrimp could taste that good, after my Midwestern diet of frozen shrimp from a box.
But, now I want to celebrate Texas City for a special moment that occurred this last week.  It's a small encounter that I hope will bring a tear to your eye, and hope to your heart.  Sal Chapa is a Texas City police officer.  I'm sure he is like most policemen -- especially those that I know -- he goes to work each day, committed to doing his job the best he can; to protect and serve the public without any expectation of acknowledgment or appreciation. 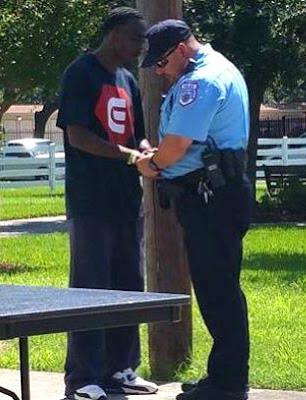 Sometimes in the performance of his job, it results in arrests of those who just can't seem to get their life in order, and incarceration becomes the punishment.  Such was the case with Edward "Doc" Amey.  He had been in and out of prison three times, and he had a rap sheet that was several pages long, including six felonies and a number of misdemeanors.  In fact, Mr. Amey had a history with Officer Chapa.  “I arrested him several years ago on a gun charge,” Chapa said. “And due to that, he ended up doing some time.”
So you can imagine the surprise Officer Chapa experienced when Amey approached him at a local chili cook off.  This Amey was a different man. While serving a five-year sentence on the gun charge, Amey had a conversation with God.  While in prison he said, “God if you are real. turn my life around”.  He was released from prison after serving a year and half, graduated Bible College with perfect attendance, and is now strong in his church.
“I have not always been a friend to the police,” Amey said.  “I grew up selling drugs. I've been to prison three times ... [and] the last week-and-a-half God has really been giving me the urge to pray for police officers.”  So that's exactly what he did when he spotted Officer Chapa.  He approached him, asked if he could pray for him, and this photo was snapped by a friend of Chapa's.  “I pray that You continue to watch over him,” Amey prayed, hand-in-hand with Chapa. “Continue to guide him and lead him in the way that You may have him go, Lord.”
Such a simple prayer, but when spoken out loud, it can have such profound ramifications.  After the photo went viral on the Texas City Police Department's Facebook page, Amey had this comment: “They’re used to seeing cops getting killed by young black men, or young black men getting killed by cops.  [People] are not used to seeing an ex-con and a cop praying with each other.”
The unlikely duo hopes the simple act of praying together will inspire more run-ins with the law like theirs.  “I love you,” Amey said at the end of his prayer.  “I love you, too, brother,” Chapa said. “Thank you very much for praying for us.”
What a picture of grace, mercy, redemption, and forgiveness!  It is the perfect story to present to you as we approach the Day of Atonement on the 23rd.  And it is further evidence that God is still at work in this world and the devil will not win!

Colossians 1:20-22    "And through Him to reconcile to Himself all things, whether on earth or in heaven, making peace by the blood of His cross. And you, who once were alienated and hostile in mind, doing evil deeds, He has now reconciled in His body of flesh by His death, in order to present you holy and blameless and above reproach before Him..."
Posted by Pam Kohler at 7:00 AM