Boys With Sticks: Intelligent Advice From A Wise Mother

If, like me, you are "of a certain age", then you are most likely becoming discouraged about our culture's disparagement of manhood.  Our little boys are dissuaded against playing with toy guns; of displaying any form of aggression or boldness; and of emphasizing their decidedly genetic tendencies to protect "the fairer sex".  For pity's sake, they can't even point a fake finger gun at anyone without their school record classifying them as a "danger" for their entire academic career!
We now live in an age where men are no longer allowed to be "men".  They must now subject themselves to a lower status for all the years that they supposedly "kept women down."  The culture not only wants to blur the line between the sexes, but appears to promote the erasure of any line at all ... we are all free to "be" whatever we feel like on any particular day; and heaven forbid you are decidedly one sex or the other.  But you most definitely do not want to flaunt any characteristically male behavior.  No sir, that's strictly taboo these days, because, don't you know ... it always leads to unnecessary violence! 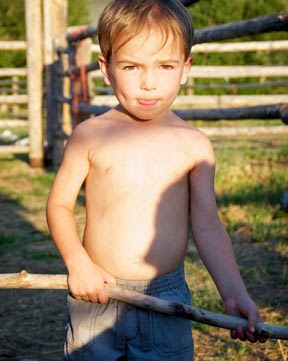 So, I want to applaud Simcha Fisher, a mom with common sense and (whether she knows it or not), the wisdom to know that God made boys in His image.  In an article titled, Boys With Sticks, Fisher lays out her argument for letting "boys be boys".  She writes:  Are we so afraid of the power of violence to overtake us that we are uncomfortable with its harmless expression in children’s play?
Yes, we are, and it’s making a mess of the world. It doesn’t make violence go away when we always tell boys, ‘Put that stick down.’ Instead, it’s making a world where people -- boys and girls alike -- have no idea what to do about unjust violence.
Boys playing with sticks is not a meaningless game. It’s something that little boys absolutely must be allowed to do, if that’s how they want to play. A boy who wants to pick up a stick needs to know that he can, and he may, and that his affinity for sticks is not a bad thing. He needs to know that a stick is a powerful thing, and that the world needs men who know how to use their sticks.
Bravo, Mrs. Fisher!  Your sentiment fits right in line with what Scripture tells us in 1 Corinthians 16:13-14:  "Be watchful, stand firm in the faith, act like men, be strong. Let all that you do be done in love."  Those without God in our culture want us to throw out that first sentence; and in attempt to force their version of the second sentence, they have emasculated our boys and men into becoming ineffective warriors.  For, warriors is what they are called to be.  It may sound old-fashioned, but I can remember when men could take pride in being their wife’s protector; in being a father who provided for his family; or a brother who watched over his siblings -- when policemen were celebrated for their service to the public's welfare; and a soldier for defending his country.
Actually, that's a pretty smart play by the devil.  If he can convince us that without warriors, there will be no violence in the world, then he has leveled the playing field in our spiritual warfare.  Of course, you recognize that I am looking at this issue through my Biblical worldview.  But I don't believe my view is really that far off from Simcha Fisher, who says this about the warrior mindset:  Boys who are never allowed to be wild are boys who never learn how to control that wildness. Boys who are not allowed to whack, and be whacked, with sticks never learn what fighting is like. What’s so bad about that? Well, they may end up hitting someone weak, with no idea how much it hurts to be hit. Or they may end up standing by while the strong go after the weak – and have no idea that it’s their job to put a stop to it.
While I see no mention of God's plan for His male creation in that statement, I certainly think the  description of a boy's experience she offers can yield the opportunities to learn both compassion and what it means to stand steadfast for righteousness and justice.  This is perfectly stated in Micah 6:8, which tells us, "He has told you, O man, what is good; and what does the Lord require of you but to do justice, and to love kindness, and to walk humbly with your God?"  Of course, that last part is vitally important in accomplishing the first two admonitions.  And there is the unspoken truth that with these responsibilities as protector, provider, warrior, God has set the boundaries for men ... it is all to be done to glorify Him.  So little boys must be given rules to play by, and to know where their sense of power comes from.
I must say that I am glad that I am of a generation that still honors the traditional roles of men and women.  I love knowing that my husband takes his role as my protector and provider seriously and with pride.  I am thrilled to see my nephews following their calling as police officers. And I am encouraged by seeing my Godson live out the warrior spirit that is inherent in his young personality.  This world is spiraling into chaos and unmanageable violence.  Satan has his warriors on the battlefield... we better be training up ours for the fight of our lives!

Psalms 18:39    For You have girded me with strength for battle; You have subdued under me those who rose up against me.