I can't help it.  I just instinctively recoil when I hear about another deal made between pharmaceutical corporations and biotechnology companies.  Add in the Bill and Melinda Gates Foundation, and I am instantly suspicious.  So was Rob Matheson at TechSwarm, who reported that an implantable, microchip-based device may soon replace the injections and pills now needed to treat chronic diseases. 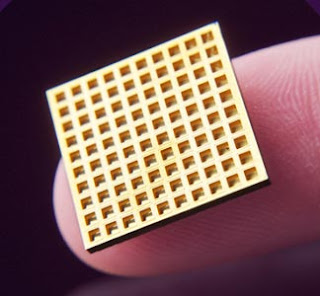 According to Matheson, a company called Microchips Biotech partnered with Teva Pharmaceuticals, the world’s largest producer of generic drugs, to develop and commercialize its wirelessly controlled, implantable, microchip-based devices that store and release drugs inside the body over many years.  The microchips consist of hundreds of pinhead-sized reservoirs, each capped with a metal membrane, that store tiny doses of therapeutics or chemicals. An electric current delivered by the device removes the membrane, releasing a single dose. The device can be programmed wirelessly to release individual doses for up to 16 years to treat, for example, diabetes, cancer, multiple sclerosis, and osteoporosis. Sounds good, right?
I will admit that medical technology has seen great advancements in recent years; and who can deny how great it would be to help eradicate and control all the above-mentioned diseases, or how much the industry has done to help our wounded veterans returning from war?  But when I listen to some of the philosophies of the inventors, and who they are willing to get into bed with ... well, frankly, it sends chills up my spine.
All you have to do is read about the history, and listen to some of the comments made by Microchips Biotech cofounders Michael Cima and Robert Langer.  (The emphasis in italics is mine). Inspiration for the microchips came in the late 1990s, when Langer watched a documentary on mass-producing microchips. “I thought to myself, ‘Wouldn’t this be a great way to make a drug-delivery system?’” Langer says.  He then brought the idea to Cima, a chip-making expert who was taken aback by its novelty. “But being out-of-this-world is not something that needs to stop anybody...” Cima adds. “In fact, that should be the criterion.”  Follow that up with this revelation:  Together with graduate student John Santini PhD, they invented a dime-sized prototype which contained only 34 reservoirs, each controlled by an individual wire connected to an external power source. At the time, they considered a broad range of practical, and somewhat fantastical, applications beyond drug delivery, including disease diagnostics and jewelry that could emit scents. “We were trying to find the killer application. We thought, ‘I have a hammer, what’s the right nail to hit?’” Cima says.
Now, I know that less critical people would see nothing remarkable about their statements... just a couple of science geeks thinking outside the scope of normal applications.  And maybe my spiritual discernment is super-charged, but when these microchip geniuses note that at about this time their invention captured the imagination and interest of the Gates Foundation, then the story takes on another dimension.
It was after the results of their first human trials were published in 2012, that Bill Gates took notice.  Their microchips were implanted into seven elderly women, delivering teriparatide to strengthen bones. Results indicated that the chips delivered doses comparable to injections — and did so more consistently — with no adverse side effects.  So, wouldn't you know it -- Bill Gates quickly sees how the microchip technology could be used in his ongoing campaign to control population growth.  Because, don't you know, there is apparently a huge problem in the world of medication-prescription adherence -- and it is a surprisingly costly issue in the United States. A 2012 report published in the Annals of Internal Medicine estimated that Americans who don’t stick to prescriptions rack up $100 billion to $289 billion annually in unnecessary health care costs from additional hospital visits and other issues. Failure to follow prescriptions, the study also found, causes around 125,000 deaths annually and up to 10 percent of all hospitalizations... not to mention an exponential growth in the number of babies born to women who don't follow any form of birth control.
Do you see how that line of thinking would appeal to Bill Gates, who perceives a huge problem in the world's population explosion?  (Remember his oft-quoted statement at the Technology, Entertainment, and Design (TED) Conference ... "if we do a really great job on new vaccines, health care, reproductive health services, we could lower [global population] by perhaps 10 or 15 percent.")  Imagine if you could implant women in third world countries with contraceptive-delivery microchips that controlled conception for 16 years.  Think you might be able to lower global population numbers?  Infertility would be a convenient "fix" for the world's overpopulation issue.
Of course, I know I am only looking at this from a potentially harmful aspect.  But like I said at the beginning ... I can't help it.  The mad scientists and technology engineers of the world have openly declared that they want to create "the singularity":  the imminent creation by technology of entities with greater than human intelligence.  By merging our human bodies with computer microchips, we are taking one more step in that direction.  And, ultimately, that means we lose control of the human experience; and perhaps, even of human life.
It's not hard to see that technology invented by Microchips Biotech could be used to control population growth; or decide who receives life-saving drugs; or even who is determined to be worthy of life, itself.  Can you see that individual choice will be eliminated?  Once that microchip is implanted, its wireless technology component will allow someone else to dispense -- or not -- your medicine.  Personally, I know in my spirit, that I am made in the image of God, and He gave me a brain to make my own choices about how I will treat this body; this temple of the Holy Spirit.  I do not want this flesh to be corrupted; to turn over the control of it to a piece of computer equipment that is under the jurisdiction of godless men.  I want to leave this world as I came into it ... fearfully and wonderfully made.

Psalm 139:13-14   "For you formed my inward parts; you knitted me together in my mother's womb. I praise you, for I am fearfully and wonderfully made. Wonderful are your works; my soul knows it very well."
Posted by Pam Kohler at 7:00 AM