Rod Dreher, a writer for The American Conservative, recently wrote an article that caught my eye, titled "A Chrisitanity Without the Cross".  It was based on an essay by Francis J. Beckwith, who is Professor of Philosophy & Church-State Studies at Baylor University, where he also serves as Associate Director of the Graduate Program in Philosophy and Co-Director of the Program in Philosophical Studies of Religion.  So I dare say the man is qualified to speak to us on the state of our faith in the 21st Century.
I would like to share with you an excerpt from Beckwith's article called, "The Problem with God's 'Wonderful Plan for You'."  I believe it correctly predicts the lack of true understanding that most Evangelical Christians have about what it means to "take up our cross and follow Jesus daily."  I also think that his essay will show you why -- in the wake of recent Supreme Court rulings, and the ones that are sure to follow regarding religious freedom -- the Church and Christians may be at great spiritual risk.  He points out that the typical "Gospel of Grace" message that we are accustomed to hearing preached is not what we need ... But rather than listen to my opinion of his brilliant essay, please read the following for yourself: 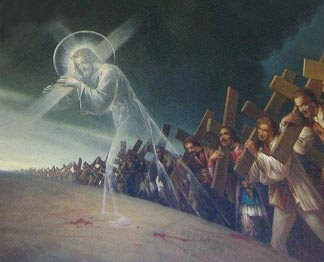 I have come to believe that the first spiritual law coined by Bill Bright (of Campus Crusade fame) – “God loves you and offers a wonderful plan for your life” – presents a misleading depiction of what it means to follow Jesus.
For some reason, this trite and superficial way of evangelizing has been the staple of American Christianity since the 1950s. It was, I believe, largely successful, because in the era in which it arose, the moral and cultural sensibilities of the Christian faith, though certainly not explicitly embraced by everyone or even lived with total integrity by those who claimed to embrace them, were considered uncontroversially true, and they were the appropriate standards by which one’s conduct could be fairly judged. Thus, there was no need to bring up the Cross, since there didn’t seem to be a hill to die on.
But the decades long near-absence of the truth of the Cross and the Gospel of suffering and transformation – that following Jesus is as much about getting heaven into you as you getting into heaven – resulted in generations of American Christians who spend half their Sunday services singing “hymns” to a Jesus that sounds more like their boyfriend than their Lord.
For this reason, as the hostility to Christian faith continues to mount in the United States – especially on issues that will require government coercion in matters of religious conscience – many of our fellow Believers, unwilling to entertain the possibility that they must suffer as Christ suffered, will continue to acquiesce to the spirit of the age and construct a Jesus that conforms to that spirit. This Lord will wind up agreeing – or at least, not disputing – any of the pieties of the secular intelligentsia.
The economic, social, and familial pressures will seem so unbearable – so inconsistent with that “wonderful plan for your life” – they will quickly and enthusiastically distance themselves from those brethren who choose to pick up the Cross and not check the “like” button. Whatever it is that hangs in the balance – professional honor, academic respectability, securing a lucrative business contract, or thirty pieces of silver – it will surely be described as the place to which “the Lord is leading us.”
Although they will claim to be devout “Evangelicals” or “Catholics,” [or Lutheran, or Baptists, or fill-in-the blank] they will nevertheless embody the beliefs that H. Richard Niebuhr once attributed to, what was at the time, the most dominant [and false] religious force in America, Liberal Protestantism: “A God without wrath brought men without sin into a kingdom without judgment through the ministrations of a Christ without a Cross.”

And that false theology will lead so many down a path of corrupted faith.  In other words, Christianity without the Cross does not represent the message of Christ.  I fear that, very soon, the faith of prosperous, comfortable American Christians is going to be put to the test.  And will they "take up their cross" and "follow Jesus"?  By that I mean can they recognize that God's plan for them might not be so "wonderful"; that it might actually involve loss and ruin, or resemble the suffering, tribulation, and death that Jesus endured?  Or will they accommodate and compromise their faith to fit the world's standards, and try to hang on to some form of that "wonderful" life they felt they were promised?
It will be interesting to see what kind of faith we Christians are made of.  I feel pretty sure that in the light of where our culture is headed, we are going to see in the days, weeks, and years ahead, a lot of people tested.  There will be Christians who will fall; heresy and apostasy will abound.  When the Cross is not part of your faith, you are simply following the Prosperity Gospel that centers on you.  True faith will require your endurance and perseverance, in the manner of our Lord.  We must partake of His suffering.  Are you ready to take up your Cross?