Our Authority to Tread On Serpents: A Personal Battle

Today, you may think I have really gone off my rocker.  But I must write about a situation that my husband and I are fighting, and it involves a beloved pet and spiritual warfare.  Actually, we have a history with fighting this battle, and in order for you to gain the full significance, I must start at the beginning.
About ten years ago, my husband, whose name literally means Peace-Loving Warrior (PLW), and I had entered a new phase of our journey with the Lord.  God had moved us to what I call my "desert years"; near a small community, to a farmhouse we would renovate, on 129 acres.  It was the beginning of my long, and often difficult, period of personal change and spiritual development, in which I began to learn to really trust God for everything, especially my provision.  In the process I was growing spiritually, and seeking ever-more knowledge of Him through His Word.
Simultaneously, PLW was becoming active in studying with me, and we decided to do a Bible study on the Book of Daniel.  Well, I am here to tell you that Satan does not want us coming anywhere near that prophetic and eschatological Book!  We were both deep into the study, seeing and understanding more about the End Times and how Satan's plan was coming into conflict with God's detailed program as laid out in Daniel ... and we were seeing it in our time, as clear as day!  This was new for both of us, and we began to eagerly read all the prophetic books in the Bible and step-by-step, began connecting the dots. 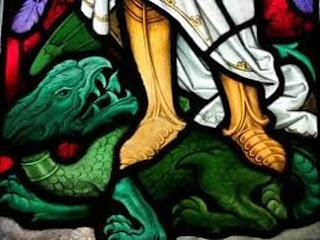 PostScript:  Just hours ago, we and our beloved pet lost our battle.  But once again, I am thanking God for the time we had (especially these last couple of days) and I am grateful for our friendship with CW, a friend and veterinarian, who graciously helped us end our dog's suffering.  It is never easy to let them go, but I am happy that she is no longer hurting and scared, and I can't wait to see her in heaven.  (And yes, I'm one of THOSE people ... I can't imagine Paradise without my animals).  And, finally, Satan may think that he won, but our faith is stronger than ever, and we're more determined than ever to beat him on the spiritual battlefield.