Critical Thinking Made The Difference on D-Day

Two days ago marked the 71st anniversary of the Allied landing on the beaches of Normandy.  Anyone who has seen the movie Saving Private Ryan, or watched the HBO mini-series and read (my personal favorite) Band of Brothers, by preeminent historian Stephen Ambrose, then you know the tremendous fight that American boys took to the arbiter of Evil, Nazi Germany.
I happened across an excellent article by Rick Moran, featured on the PJ Media website, in which he points us to an interview that Ambrose gave to C-Span on the 40th anniversary of D-Day, in 1994. (I suggest you click on the link for the full-page transcript -- it is fascinating history!)
As Moran correctly states, "One theme running through all of [Ambrose's books on WW II] was the sheer ordinariness of the American GI and how, when confronted by the greatest challenges of their lives, outperformed, outfought, and outsmarted the seemingly invincible Nazi war machine." 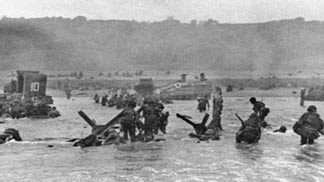 Ambrose wrote a book entitled D-Day, June 6, 1944:  The Battle For the Normandy Beaches, in which he described the mentality of the American soldier:  "They wanted to be throwing baseballs, not hand grenades; shooting .22s at rabbits, not M-1s at other men. But when the test came, when freedom had to be fought for or abandoned, they fought. They were soldiers of democracy. They were the men of D-Day. When Hitler declared war on the United States, he bet that the young men brought up in the Hitler Youth would outfight the youngsters brought up in the Boy Scouts ... Hitler was certain that the soft, effeminate children of democracy could never become soldiers."  What an interesting juxtaposition!
The reason that Hitler lost that bet?  Ambrose said it was because “the Boy Scouts had been taught to figure their way out of their own problems,” instead of blindly following orders, as the Germans were trained.  And that theory was proven correct, because we know that all the carefully laid plans of General Eisenhower and the Allied commanders went out the window, as soon as those landing crafts began arriving on Omaha Beach.
The first and second waves of troops were virtually slaughtered, and the English Channel was red with the blood of American boys.  Small groups of men took it upon themselves to regroup and rethink the plan of attack, on their own.  If they were going to survive, they had to figure it out and get the job done.  That's called Critical Thinking; and it is what I fear we are losing among our young in this country.
Critical Thinking by those men and boys secured the beaches on D-Day.  Critical Thinking is what resulted in the unique design of the Landing Craft Vehicle Personnel (LCVP), the flat-bottomed boats that successfully carried the troops onto those bloody beaches.  Critical Thinking was the strength of General Eishenhower and other military strategists in planning such a daring attack to stop  the advancement of the enemies of freedom.  As Stephen Ambrose so clearly explains it:  "[D-Day was the pivot point of the 20th century. It was the day on which the decision was made as to who was going to rule in this world in the second half of the 20th century. Is it going to be Nazism, is it going to be communism, or are the democracies going to prevail? If we would have failed on Omaha Beach and on the other beaches on the 6th of June in 1944, the struggle for Europe would have been a struggle between Hitler and Stalin, and we would have been out of it. If Stalin had won, the Iron Curtain would have been on the English Channel. If Hitler had won, I don't think he would have been able to take Britain, at least not in the immediate future, but he would have gone all the way to the Urals. Hitler's plan was to turn the problem of conquering America over to the next generation, utilizing the resources that he intended to have as a part of the greater German Reich as a result of victory."
Now over 70 years later, we are part of that next generation, with another one on the horizon.  We must ask ourselves if we still have the critical thinking skills to outperform, outfight, and outsmart the latest personification(s) of Evil.  Has the progressive agenda and its newest version, Common Core, succeeded in removing Critical Thinking from the mental make-up of our youth?  So what can we expect?  Is it going to be the Caliphate and Sharia Law, or One World Government, or will Freedom and Democracy continue, only in some weakened and unrecognizable state? 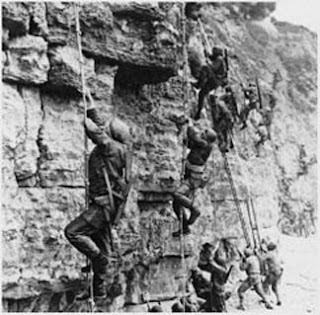 By definition, "Critical Thinking" is the intellectually disciplined process of actively and skillfully conceptualizing, applying, analyzing, synthesizing, and/or evaluating information gathered from, or generated by, observation, experience, reflection, reasoning, or communication, as a guide to belief and action.  You can see that being applied 71 years ago in the story of Joe Dawson, who led Company G on Omaha Beach, and up the nearly impenetrable Pointe du Hoc, a 330-foot high vertical cliff.  About 260 men attempted that climb.  Over 200 never saw the results of their heroic efforts. Joe Dawson got to the top of the bluff with 20 men, but he got to the top.
His spirit lives on in Congressional Medal of Honor winner and Marine Scout Sniper Dakota Meyers.  In 2009 in Afghanistan's Kunar Province, Meyer learned that three Marines and a Navy corpsman, who were members of Meyer's squad and his friends, were missing after being ambushed by a group of insurgents. Under enemy fire, Meyer entered an area known to be inhabited by insurgents and eventually found the four missing servicemen dead and stripped of their weapons, body armor and radios.  With the help of Afghan soldiers, he moved the bodies to a safer area where they could be extracted. During his search, Meyer "personally evacuated 12 friendly wounded and provided cover for another 24 Marines and soldiers to escape likely death at the hands of a numerically superior and determined foe."  That heroic effort undoubtedly took some Critical Thinking.  And I would submit to you that, just like his predecessors on D-Day, Dakota Meyer learned a lot of his thinking skills growing up as a country boy... skills that are not sought after by our cell-phone obsessed youth of today.
But I recount his story and the memories of what happened 71 years ago in order to remind myself, and you, that we are at a crucial phase in the evolution of our national identity and history.  We are at our own pivot point, just as the nation was on D-Day, 1944.  The world is trying to determine who is going to rule in the 21st Century.  Do we, as Americans, still have the critical thinking skills to pull off a victory that will stop the encroaching Evil?  Hitler thought our youth were effeminate and soft; incapable of conquering the ugliness of war.  As Satan's representative on earth, the Fuhrer underestimated the grit, the courage, and the inestimable fortitude of America's farm boys and, yes, their Boy Scout values.  If we're going to staunch the flow of evil in this century, we're going to need to quit relying on our iPhones and computers to give us all the answers, and begin thinking with the brains God gave us.  We employed that concept on June 6, 1944, and it won the day.

Proverbs 1:2-3   "That people may know skillful and Godly wisdom and instruction, discern and comprehend the words of understanding and insight; Receive instruction in wise dealing and the discipline of wise thoughtfulness, righteousness, justice, and integrity..."