The Real Meaning Of Peace In Our Lives

This last weekend I was blessed to get together with a faithful group of Christians who, while spread out across a couple hundred miles, are still in proximity to each other when it comes to understanding the times.  As expected, whenever you get more than two or three people of faith together, you will find differences in theology and Biblical understanding.  But, for the most part, we were all on the same page in recognizing that world events are coming to a head; that certain situations and conditions in the world could point to the prophesied tribulation upon mankind.
Not surprisingly, I could sense both boldness and unease in the room.  There were those of us who were bold in our warnings of spiritual warfare; laying it out in real terms of opened portals and demonic activity against the followers of Christ.  And then there were those who were skeptical, denying that we would face such battle; that God would not allow that to happen because it would not glorify Him.   I am only left to think that perhaps the thought of spiritual warfare is unsettling and threatens the peace of my fellow Christians.  But do we really know the true meaning of God's peace?  I would like to share my perspective with you.
I have been greatly blessed through an association with a Messianic Jewish organization that ministers in Israel.  They truly know what it is to operate out of God's peace!  But they have taught me that "peace", in the Biblical sense, is more than a soft, restful, calm and serene soul.  For them, Peace is Power!  Let me see if I can explain ...
In John 16, Jesus is preparing His disciples for the time when He will leave them to go to His Father.  Naturally, they are dismayed and cannot fathom a life without His guidance.  But Jesus confirms that they will have Him in the presence of the Holy Spirit that will indwell them.  We are all familiar with that concept, and we know that He also tells them not to worry, that "in Me, you will have peace."  But here's what we don't fully comprehend! 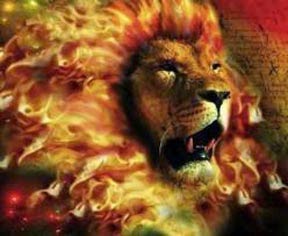 Peace -- remember, it is the peace of Jesus that indwells us -- in the light of encroaching darkness is not only the fruit of a life filled with the presence of the Holy Spirit, but it is also a weapon of war!  Contemplate His words ... the Amplified version of the Bible records Jesus as saying, " But when He, the Spirit of Truth comes, He will guide you into all the Truth. For He will not speak His own message [on His own authority]; but He will tell whatever He hears [from the Father; He will give the message that has been given to Him], and He will announce and declare to you the things that are to come [that will happen in the future].  He will honor and glorify Me, because He will take of (draw upon) what is Mine and will reveal (transmit) it to you.
What is it that Jesus has, that the Holy Spirit will draw upon and give to us?  Power from God!  He will give us a strategy for overcoming the world!  This power and authority from Jesus, through the Holy Spirit, gives us the confidence to know that we are not victims of whatever world leaders decide.  Instead we are players; we are world-changers; we are overcomers, just as Jesus was!  "Peace" is by no means a passive term, here.  We are to call upon it as we wage spiritual war against the Enemy.
Peace is not a noun; a state of mind, soul, or spirit to be wished for.  Peace is a verb; it is what Jesus said we would receive from Him in order to overcome the tribulations we would endure.  It is a powerful tool in our spiritual warfare arsenal, and it is ours to wield.  When we use His power and the authority from the Holy Spirit to overcome this world, we are truly in the midst of His peace.  When we take to heart his words in John 14:27, we gain both His Peace and the serene calmness the world knows as peace:  "Peace I leave with you, My peace I give to you; not as the world gives do I give to you. Let not your heart be troubled, neither let it be afraid."
As my friends in Israel have shown me, we are never helpless, and as those who have been "called out" by God, we can make a difference by partnering with Him through the use of Jesus's power and authority, which reside in us as the Holy Spirit.  Let's use His power to embrace our peace!

Philippians 4:6-7   “Be anxious for nothing, but in everything by prayer and supplication, with thanksgiving, let your requests be made known to God; and the peace of God, which surpasses all understanding, will guard your hearts and minds through Christ Jesus.”