In Defiance of the Culture

It is becoming increasingly difficult to write about any advancement in the state of human affairs.  Every report, or announcement, or news item sounds as if mankind, those ruling over them, and the very planet itself have become disconnected from reality.  You have stories of giant sinkholes appearing around the globe; strange "booming sounds" being heard across the country; economic meltdowns forecast in Ukraine, Greece, Europe, and right here at home.
Christians are being tortured, burned and crucified in the Middle East -- the very birthplace of our faith.  The fate of 90 more are in the balance after being abducted by ISIS fighters in northern Syria.  Historic Middle Eastern books, numbering over 8,000, have been burned in Mosul, Iraq in barbaric acts that have seen shrines, tombs, books, and ancient manuscripts destroyed in the effort to establish an Islamic caliphate.
The very freedom of ideas is at stake as we await the ruling on net neutrality.  And the very existence of the world is at risk as nations are rightfully concerned about the terms of the Iran nuclear talks.  Will Iran be limited in their pursuit of nuclear capabilities?  At the same time, what does it mean that Russia’s state-owned defense conglomerate Rostec has offered to sell advanced anti-aircraft missiles to Iran? 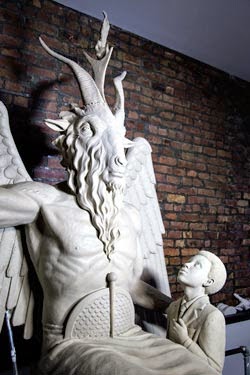 The freedom of speech and religion are under attack when a 70-year-old women can be threatened with the loss of her business, home, and personal assets for refusing to compromise her faith and sell flowers for a same-sex wedding.  At the same time Oklahoma law allows for religious statues as long as they are paid for with private donations.  So that's why The Satanic Temple intends to plant the goat god, Baphomet, on the lawn of the Oklahoma state Capitol, alongside a monument of the Ten Commandments.  This statue of Baphomet portrays him as a horned, winged, sexually ambiguous, goat-like deity, with a goat's body and cloven hooves; with a smooth and muscular chest, thin shapely lips and rectangular pupils.  A flame protrudes from the top of his head, and from his lap a staff with two snakes wrapped around it: a caduceus. When the piece is completed, Baphomet will be seated on a throne underneath an inverted pentagram. On either side of him, two children — a boy and a girl — will gaze up adoringly.  So I guess it depends on which religion you promote, whether you are free to express it, right?
Let's not forget "designer babies", and babies born with three or more parents.  Nothing is impossible or forbidden!  And this is just scratching the surface!  What has happened to logic and order and morality?  What has happened to standards of decency and the recognition that "moral relevancy" is out of control -- that mankind is incapable of judging the right and wrong of his own selfish and depraved desires?
I'm not saying that there is no good left in the world.  There will always be those who shine God's light into this dark world; and those who rise above humanity's baser tendencies.  God will see to that.  But I fear that rarely has history seen such a confluence of man's authority on this earth in such rapid decline -- whether it pertains to such spheres as societies, governments, political systems, militaries, religions, educational systems, scientific advancements, technological developments, medical imperatives, or how he perceives himself in relation to his Creator ... it all speaks to man's inability to look beyond his own narrow existence.  We have become products of our own self-centeredness, and our high opinions of ourselves.
But the good news is that there is a noticeable shift and a rising up of people who are willing to become "counter culturalists" as author Joe Battaglia calls them.  There is a courage and a sense of power and strength in standing for one's holy convictions.  We are tired of the intellectual dishonesty, the unbridled pride of men, the overwhelming presence of unbelief ... and we are more than willing to speak in absolutes; categorical, unconditional, and incontrovertible truths.  We are not willing to compromise our words or morals to please the majority or a vocal minority.  I know that it is an unpopular stance in this day of "tolerance" and "equality".  And we can expect to be ostracized, excluded, shouted down, and eventually persecuted.  But there's one thing the Enemy can count on: we will be unmoved in our purpose and our intention.  We were created for this time, and no amount of deception will discourage us.

Matthew 24:45    "Who then is the faithful, thoughtful, and wise servant, whom his master has put in charge of his household to give to the others the food and supplies at the proper time?"