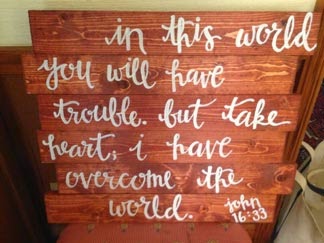 Feeling unnerved and disheartened?  Who wouldn't be, when every news report and headline foretells chaos and disorder.  For instance, everyone is on pins and needles, waiting for the verdict to come out of Ferguson.  The protestors have released a long list of St. Louis area locations they wish to target, should the verdict not be to their liking.  And they have received coaching from the Community Organizer-in-Chief, to "stay on course".  (I would like an explanation of exactly what that means, please.)  But it's not only Ferguson and surrounding areas that are in a state of suspense.  This event could potentially affect every town in America, as this case has become about race, not justice.
And speaking of lawlessness, are we soon to be engulfed with up to 5 million immigrants whose illegal status will be made valid by a stroke of the President's pen? Executive Amnesty is a bold political move, and the tactic is obvious -- appear to be the Party of Hispanic inclusion, and paint the Opposition as anti-immigrant, thereby playing ahead to the 2016 Presidential elections.  But, in reality, this move is against the immigration laws already on the books, and appears to threaten Constitutional Order.  And I dare to suggest that this is not really about providing citizenship to hard-working immigrants, or securing Democratic power for generations to come, so much as it is designed to bring down our economic system and force us into Socialism.
Then there is the report that the Islamic militants engaged with ISIS number around 200,000; at least three times higher (and some sources say seven times higher) than previous CIA estimates.  There is also the fact that their latest beheading video is situated in Dabiq, Syria, which has great significance.  According to Front Page Mag, "Dabiq is a highly symbolic location which has historical and religious significance for Islam. The Islamic State has designated this place for the “Final Hour” where Armageddon will begin in an Islamic apocalyptic tradition that designates the West as modern-day Romans."  It is this murderous Islamic army's goal to bring about the "Final Hour" of this final Crusade.  We, in the West, disregard their bloodlust at our own expense.
These are only a few of the top headlines that assail us each day; Russia's aggressive stance, the unorthodox weather, another Ebola death in our homeland, and the growing gap between our citizenry and those who rule us, all combine to create an unsettling environment in which to live our lives.  Could it seem any worse?
How are we to react?  Granted, we cannot ignore it; the potential to impact our daily lives is obvious.  But, unfortunately, it doesn't appear that we have much control over any of it.  Those who are observant will take the necessary steps to protect their families, and be prepared to confront any immediate danger or enemy that presents itself.  But there is so much that is out of our hands.  I must admit that there are times I cannot see past this world, and it threatens to overwhelm me.  The spirit of this realm tells me that I am simply a pawn, that I have no power, and I am expendable.  It tells us all that we don't matter in the big scheme of things.  So, when we choose to listen to those lies, it keeps us in check, and we dutifully submit.  But it's all lies!!!
I am here to tell you that the powers of this world have no claim on us, if we will just recognize our purpose.  If you belong to God, then He resides in you, and we have His power to overcome the negative spirits of this world.  And I don't want to mislead you -- being an "overcomer" implies that there is going to be a battle; and the battle lines are being drawn.
But we aren't left defenseless, and we must hold our position, even in these, the greatest trials of our lifetime.  I know it sounds like some "religious nonsense", but we must stop listening to who the world says we are!  We have been given a Promise that outlasts this world; that is far more glorious than all the power and riches and security that this earthly system can provide.  Oh, sure, the world will ridicule us and marginalize us, but we don't have to listen!
It is our purpose to show the world that we depend on Christ for our victory, no matter the cost.  Let them rely on deception, and their own power, to reap the rewards of this world.  I know that the headlines are only going to get worse, and that my comfortable life in the most blessed nation on earth, is going to drastically change.  But I can also rest in the conviction that my endurance through all the forthcoming trials, my complete dependence on Christ, and my witness of His Saving Grace will bear fruit for His Kingdom.  So, let the negative headlines continue, and let the rulers of this world proceed with their chest thumping.  I know who I am, and what my purpose is; I will triumph over all obstacles, and I will move toward my ultimate reward.  I will not be defeated!

1 John 5:4     "For everyone who has been born of God overcomes the world. And this is the victory that has overcome the world—our faith."
Posted by Pam Kohler at 7:00 AM