And Israel Cried Out To The Lord ... 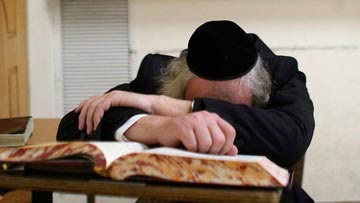 UPDATE:  A fifth victim has died due to the horrendous slaughter by Palestinian terrorists at a Jerusalem synagogue.  Others are in serious and critical condition.

Have you noticed that the world's focus has turned once again to the nation of Israel?  No matter what your faith, the brutality of the murders at a Jewish synagogue in Jerusalem should break your heart.  Two Palestinian terrorists entered the place of worship with guns and meat cleavers and killed four people, including a Rabbi, and seriously injured seven more.
According to Israeli news sources, the two terrorists entered the synagogue in the middle of prayers, and began shouting "Allahu akbar'.  Their murderous rampage lasted only a short time before they were both killed by Israeli police in a shootout.  Among the dead are three Israeli-Americans.
World leaders quickly called the attack "an act of pure terror and senseless brutality and violence", and even Palestinian President Mahmoud Abbas condemned it; the first time he has done so since the violence has erupted over the contested Temple Mount.  As to be expected, Hamas, the Palestinian Islamic terrorist organization, praised the attack as a “response to ongoing crimes against the al-Aqsa mosque [Haram Al-Sharif]”, and called for increased violence.  People lined the streets in Gaza, as Hamas passed out candy to celebrate the murders.
To the rest of the world, it may be difficult to understand why so much violence and hatred is centered around the Temple Mount.  To fully understand the relevance of this sacred site, one must know its history and its significance.  The Temple Mount is considered to be the holiest site in Judaism, the third holiest site in Islam, and a revered site to Christians. To the Jews it is known as Har HaMoriyah (Mount Moriah) and Har HaBayit (Temple Mount); to Muslims it is known as Haram al Sharif (the Sacred Noble Sanctuary). In the Bible it is also called Mount Zion, which signifies both a physical location (Jerusalem) and a spiritual kingdom, whose center will be a heavenly Jerusalem.
So, as we race towards the final confrontations of this world, we are beginning to see the culmination of 2,000 years of contention for this sacred ground.  It is the spot identified by Christians and Jews as the place where Abraham offered Isaac as a sacrifice, and the location of the Holy of Holies in the Jewish Temple.  It is also the site of Solomon's Temple, and Zerubbabel's Temple, which was destroyed by the Romans in 70 AD.  But to the Muslims, this site is called The Dome of the Rock, and was built in AD 692 over the place where Mohammad supposedly ascended to heaven.  During the Crusades, Christians took temporary control of the Temple Mount, and the Al Aqsa Mosque was used as a palace and church in 1099.  Today the Temple Mount is under the control of the Jerusalem Islamic Waqf, a trust that was established in 1187 to manage the Islamic structures in Jerusalem. Under their current rules, access to the holy sites is prohibited to all non-Muslims.
But recent archeological discoveries have pointed to the overwhelming evidence that this location originally belonged to the nation of Israel, far earlier than the building of the Dome of the Rock and Al Aqsa Mosque in the 7th century.  And now impassioned Jews want access to their holy site.  In recent weeks, there have been clashes between Jews and Muslims, as each fights for the freedom to pray at this contested shrine.  Under an arrangement in place since Israel's capture of the Old City and its shrines in 1967, the sacred plateau is administered by Muslims reporting to Jordan, while Jews have a right to visit.  But that is becoming increasingly unacceptable to either faith.  The Jews don't want to simply "visit" the Temple Mount, which they see as "the deepest root" to their faith; and the Muslim faithful see the encroachment by the Jews as changing the status quo and the control of the site.  Passions are rising, and daily clashes have resulted in at least two deaths. 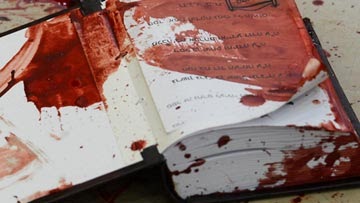 And now the violence has opened a wound that may be difficult to heal.  Fueled by Palestinian revenge (through Hamas), Jerusalem threatens to become engulfed in religiously-fueled hatred of Israel's "occupation".  It is easy to believe the emotional rhetoric that calls for a "Palestinian homeland", but few people bother to research the facts of history.
The term “Palestine” is believed to be derived from the Philistines, an Aegean people who, in the 12th Century B.C., settled along the Mediterranean coastal plain of what are now Israel and the Gaza Strip. In the second century A.D., after crushing the last Jewish revolt, the Romans first applied the name Palaestina to Judea (the southern portion of what is now called the West Bank) in an attempt to minimize Jewish identification with the land of Israel.  (Satan's influence can be seen down through history as he attempts to eradicate God's "Chosen" people).
The Hebrews entered the Land of Israel about 1300 B.C., and enjoyed sovereignty under various kings until the Babylonian conquest in 586 B.C.  The Jewish people enjoyed brief periods of sovereignty afterward until most Jews were finally driven from their homeland in 135 A.D.  It is interesting to note that Jewish independence in the Land of Israel lasted for more than 400 years. This is much longer than Americans have enjoyed independence in what has become known as the United States. In fact, if not for foreign conquerors, Israel would be more than 3,000 years old today.
But here is the fact that is ignored in today's ongoing war between Arab nations and Israel:  Palestine was never an exclusively Arab country, although Arabic gradually became the language of most of the population after the Muslim invasions of the seventh century. No independent Arab or Palestinian state ever existed in Palestine. When the distinguished Arab-American historian, Princeton University Prof. Philip Hitti, testified against partition before the Anglo-American Committee in 1946, he said: “There is no such thing as ‘Palestine’ in history, absolutely not.”
The area, known as Palestine, today, was historically a part of southern Syria.  So the truth of Palestinian Arab nationalism is that it is largely a post-World War I phenomenon that did not become a significant political movement until after the 1967 Six-Day War.  And now through powerful propaganda efforts, undoubtedly fueled by a dark spiritual element, war has been declared on the natural rights of Israelis and Jews to their "Promised Land".
So, for those who seek an agreement with Palestine through Israeli concessions for land, and a compromise of the conflict over the Temple Mount, I urge you to read the Bible.  I fear that there will be more atrocities such as what happened at the Jerusalem synagogue, but Israel's enemies need to realize one thing ... God's Plan for the nation of Israel and Mount Zion will never be defeated.  And in light of these prophecies,  the Biblical command to "Pray for Jerusalem" has never been more appropriate.

Thank you to the website, GotQuestions.org for their valuable history of the Temple Mount.  Thanks also to the Jewish Virtual Library for their history of Israel's Roots.   As a Christian, and a student of the Bible, it is my opinion, that these sources are correct in their knowledge.

Psalm 87:2-3    "The Lord loves the gates of Zion [through which the crowds of pilgrims enter from all nations] more than all the dwellings of Jacob (Israel). Glorious things are spoken of you, O city of God."