Why Is Israel So Hated?

With another beheading of an American in the last few days, the obsession and hatred of the West and Israel was made abundantly clear by the Islamic State Caliph, Abu Bakr al-Baghdadi.  I suppose I  can rationally explain his obsession with the U.S. and their coalition forces.  Muslims in the Middle East resent the presence of our troops on their soil and our interference in their governments.  The liberalism of the Western culture is an affront to their religious sensibilities, and there is the centuries long battle between Christendom and Islam.  The Crusades of old are still alive and well, and they center around the Holy Land and its people.
Al-Baghdadi has described the Jews "as money-hungry individuals who controlled the leaders of Muslim countries ... The Jews were frightened; they feared for their economy. They feared for the Muslims’ wealth and the goods of our lands, which they plunder, suck dry, enjoy themselves with, and fight us with via their agents from amongst the treacherous rulers of the Muslims’ lands. They fear for their security. They fear the revolt of the Muslim peoples [against their rulers]. They fear their defeat. They fear the return of the Khilafah (caliphate) and the return of Muslims to pioneering and leadership." 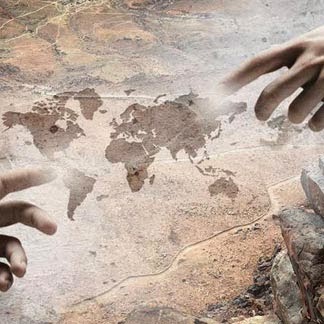 But where does this display of al-Baghdadi's boastful hatred and revulsion for the Jews come from?  And why have the nations of the world hated Israel?  For sure, this hatred has prevailed since Israel came into existence nearly 3700 years ago.  When God "chose" the Hebrew people from among all the nations, and established them in "the land He gave them", they became a target.  They were despised for what God accomplished on their behalf; for how they conquered the land with the help of their Lord.
While Israel might have been the immediate object of much hatred and contempt; in reality, it was their God that the nations hated -- because the God of Israel was greater than any of the false gods of the conquered nations.  That hatred has not waned down through the ages; and because they hated God, they hated everything that came from Him ... His Word, the Bible, and His "chosen" people, the nation of Israel.  It really is as simple as that.  Remove all the politics and the warring religions and the conflict between ethnic peoples and it comes down to this:  they hate the reality of Jesus, the Jewish Messiah, and the King and Redeemer of Israel.
That makes the modern restoration of the nation of Israel to their ancient lands a bitter pill to swallow.  Because if God's prophecy of a restored Israel has come true, then "the rest of the story" (as Paul Harvey would say) may also be truth.  You see, it is not merely the history of the last nearly four thousand years of national conflict that has wrought a great animosity towards Israel; there has been enmity against God's plan for the Messiah to come through the nation of Israel since the Garden of Eden.  There is an evil, spiritual source behind the hatred for Israel.  This hostility can be traced to a spirit of anti-Christ; any person or spirit who opposes and denies Christ as the Son of God, and wishes to prevent His return as the King of Israel --- which is the final prophecy of the Bible.
This spirit can be seen in the plots and tactics of evil rulers down through history, starting with Satan -- certainly Haman, Antiochus Epiphanes, Nero, Titus, Hitler and now al-Baghdadi all qualify.  And, as Israel's Prime Minister, Benjamin Netanyahu said on Face The Nation yesterday, "The Middle East is awash with militant Islamists ... Ayatollah Khamenei, the ruler of Iran, calls for the annihilation of Israel. He just did that four days ago. He specified nine ways and reasons by which Israel should be destroyed."
Behind it all is that spirit of opposition to Christ; a spirit who abhors the reality that Israel is actually in their homeland, and the possibility that her King may soon reign.  And so, as we begin to see the ancient Biblical prophecies fulfilled, the nations are being drawn to Israel to come against her -- just as the Bible predicted!  You see, al-Baghadi, and the nations aligned with him, know what the Bible says will happen; they know that Jesus, Israel's King, will appear with His armies of Heaven, and they will be destroyed.
It is their delusional and deceived hope that if Israel can be "pushed into the sea", and it no longer exists, that their own destruction can be prevented.  But that is because they have believed the Lie and are sadly deceived.  But the truth is this:  Israel can do nothing to alleviate the hatred from the nations; no amount of concessions for land will satisfy the hatred against her -- that die was cast in the Garden, and the enmity will survive until her Messiah returns.  As for Israel, Jesus, himself tells her that she will be "desolate" -- miserable and grief-stricken -- and He will not return until the nation recognizes Him as their King.  How close are we?  No one knows; but you can feel the spiritual battle rising.  Pray for the peace of Jerusalem!

Psalm 2:1-2     "Why do the nations assemble with commotion, and why do the people meditate upon and devise an empty scheme? The kings of the earth take their places; the rulers take counsel together against the Lord and His Anointed One (the Messiah, the Christ)."