Ebola On Our Minds 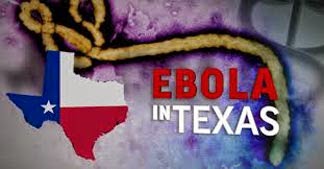 To say that we Texans are keeping a sharp eye on Ebola is to trivialize the seriousness of this killer virus.  With the news that a second nurse in Dallas, who cared for expired patient Thomas Duncan, has now tested positive for the disease, the Lone Star State is on high alert.  Because both nurses followed all the prescribed protocols, were wearing protective hazmat suits -- and still contracted the illness -- it is only natural that we are left wondering just how safe we are.
In fact, according to an article by Bryan Preston, even though both the nurses and the Dallas hospital claim that official CDC protocol was followed, "the Centers for Disease Control, though, claims that there was some breach of protocol, only, it doesn’t know what that breach may have been or when it may have happened. The CDC appears to be falling back on bureaucrat-speak to explain something that, so far, it cannot."  That's reassuring, isn't it?
So, you can understand that it is not at all uncommon for me to be involved in casual conversations that turn to speculation over how long it will be until we begin wearing N95 face masks in public.  I have dear friends who will be flying to Washington D.C. this week, and who are understandably concerned; not only about flying in a closed-air-system plane, but of the report that Ebola had been "ruled out" in a recent D.C. patient.  Can that report be trusted, given the mistakes made in Dallas with Mr. Duncan, and the CDC's inability to explain the latest case?
Then there is the fact that these friends will be meeting with a group of us for a Bible study just a few short days after their return.  If they are somehow exposed, what is the possibility that others in the group could become infected?  After all, I am still not convinced of the CDC's announcement that Ebola is not airborne, nor am I exactly sure of the incubation period of the disease... it all seems so "vague".  And, I'm not entirely convinced that it is not deliberate.  But one thing is becoming clear to us here in Texas  -- just how quickly this could become unmanageable.
And did you know that there are only four hospitals in the U.S. that are designated to handle Ebola cases?  They are Montana, Nebraska, Georgia and Maryland; obviously not Texas.  Yet, we now have the potential for an outbreak here.  So, what is the plan?  Is there one?
I have to admit that I do not understand why we are not limiting flights from West Africa.  Furthermore, the screening procedures put into place at 5 major airports don't give me a lot of confidence.  Having a high fever and flight plans originating in West Africa will get you pulled out of line and subjected to further screening --- but neither of these tests would have called attention to Mr.  Duncan.  He was not exhibiting fever, and he lied about which country he had entered from.  And what would keep a potential Ebola victim from deliberately flying into a different airport, now that we have announced where they would be screened?  With over 150 passengers per day from Ebola-stricken countries, it is only a matter of time before someone sneaks through the cracks again.
At this point, you might be thinking that I have given in to my fears; and it would be easy to do so.  But we Texans are not made that way.  True, it is evident to me that we are not prepared to prevent more cases of Ebola.  There are simply too many possible failure points, and too little known about the transmission and control of the disease.  But we Texans are not known to panic, and do not want to do so irresponsibly.  At the same time, it is foolish to act as though there is no danger.  For me, it is a matter of trusting God to deliver me from this pestilence.  There is nothing that He cannot conquer.  If this disease should touch me or someone I love, it is because it is His will.  In the meantime, I and my fellow Texans, will remain cautious and suspicious of "official" claims, and do what Texans have always done ... stepped up and boldly faced our obstacles.  I have faith that, together with God, we will defeat this plague.  Our health ... and yours ... depends on it!