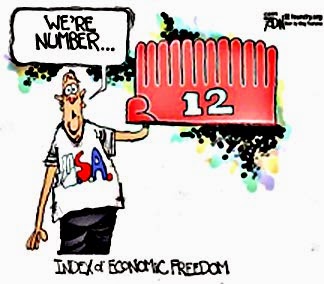 Freedom and Free Enterprise ... they go hand-in-hand.  So when the Cato Institute released its 2014 Annual Report on the Economic Freedom of the World, it was bad news for the U.S. -- we didn't even finish in the Top Ten! And, yes, the Cato Institute is, by its own definition, "a public policy research organization — a think tank – dedicated to the principles of individual liberty, limited government, free markets and peace."  Those who will want to dispute its findings will do so on a partisan political basis, but the facts don't lie ... we are losing our economic freedoms; the very ones that preempted the founding of this nation.
Breitbart.com, in their article on this Annual Report, informs us that "as recently as 2000, the US ranked 2nd in the world, in terms of boasting a free economy. The US's declining ranking will lower future economic growth."  That is something that should concern every American; and not just for the impact on our wallets! It has as much to do with the "freedom" part of the report, as it does the "economic".  And here's why:  The Cato Institute measures 5 broad factors in scoring each country's economic index ... 1. Size of government; 2. Legal structure and security of property rights; 3. Access to sound money; 4. Freedom to trade internationally and; 5. Regulation of Credit, Labor and Business.
In case these considerations sound familiar, they are listed in our Declaration of Independence as reasons for our grievances against Great Britain, and became aligned with the eventual causes for our Revolution and the founding of a new nation.  But, today, are these causes even recognized as crucial to the American experience?  Have we lost the sense of who we are in the midst of a bloated government and a sea of entitlements?  Do we not see that the encroachment on our personal liberties, along with excessive regulations and the intrusion of the U.N. in our domestic affairs does not fit who the United States was designed to be?
In case it has been a while since you had an accurate history lesson about our nation, let me remind you of what the Founders meant in the Declaration of Independence; that we "are all endowed by our Creator ... with Life, Liberty and the Pursuit of Happiness."  Those three principles are the bedrock of America's development -- no matter how they have been maligned. 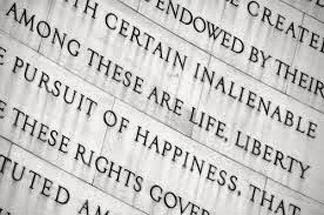 The meanings of "Life" and "Liberty" haven't changed much in 230+ years.  But it is important that we understand what was meant by "The Pursuit of Happiness".  To early Americans this phrase was known to represent the individual right of every free citizen to own property and pursue a living.  That was "Happiness", and Americans knew it was ours, by the grace of God.  Today, the American Dream still resonates around owning your own home and being able to receive fair wages for an honest day's work.  However, we've pretty much discarded the part about God being responsible for our blessings.  I'm absolutely convinced that has played a part in our failing economic condition.
By including that phrase in the Declaration to the British Monarch, the Founders hoped that we would keep inviolate, not only our responsibilities to preserve the Constitutional Republic, but preserve our enduring hunger for personal rights and liberties that guaranteed not only a man's right to  personal property, but that resulted in competitive and fair enterprise.  This country was not founded on the beliefs of "community property" or "state-regulated commerce."  And that's what was at the center of our complaints against King George III.
The list of "Oppressions" and "Grievances" by Thomas Jefferson and his Committeemen sound eerily familiar... the stalling and refusal to pass laws left the colonists "exposed to all the dangers of invasion from without, and convulsions within".  The King established "a multitude of New Offices, and sent hither swarms of Officers to harrass our people, and eat out their substance" -- sounds like the IRS to me.  Furthermore, it was pointed out, King George "combined with others to subject us to a jurisdiction foreign to our constitution, and unacknowledged by our laws; giving his Assent to their Acts of pretended Legislation."  And as it pertained to their Economic Freedoms, it was pointed out that the tyrant king was "cutting off our Trade with all parts of the world [and] imposing Taxes on us without our Consent."  Does this make you think of U.S. trade practices that hurt our economy, and the Supreme Court decision that rendered the Affordable Care Act a tax?
But perhaps more than any other principle, it was the Rule of Law that the Colonists cherished the most.  And the Cato Institute's Annual Report sheds an unflattering light on just how much we have neglected that standard.  Per the report, "Protection of persons and their rightfully acquired property is a central element of economic freedom and a civil society. Indeed, it is the most important function of government. The key ingredients of a legal system consistent with economic freedom are rule of law, security of property rights, an independent and unbiased judiciary, and impartial and effective enforcement of the law." 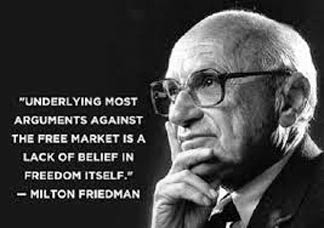 Breitbart.com summarizes it well:  "The increased use of eminent domain to transfer property to powerful political interests, the ramifications of the wars on terrorism and drugs, and the violation of the property rights of bondholders in the auto-bailout case have weakened the tradition of strong adherence to the rule of law in United States... The rule of law has long been the foundation of America's economic prosperity and liberty. The US ranking in this area has plummeted to a terrible 36th place in the world. This, combined with increased regulation is stifling US economic growth."  Quoting the Annual Report, the website observes, "[t]o a large degree, the United States has experienced a significant move away from rule of law and toward a highly regulated, politicized, and heavily policed state."
So where do we go from here?  Needless to say we do not score well in the five categories for economic freedoms.  The size of our government is clearly prohibitive, and it is obvious we don't have access to sound money.  And as long as we continue to over-regulate Commerce and ignore the rule of law and property rights of individuals, our economic future will continue to slide.  Just as the Founders determined, when there is weakness in the Rule of Law, and an improper appropriation of property rights, economic freedoms will be inhibited.  It's time that Americans reacquaint themselves with trustworthy American principles.  It won't be a quick fix, or an easy one; but one that  is necessary if we are to regain our standing in the world... then, as now, our lives, our fortunes and our sacred honor depend on it.

James 1:25   "But he who looks into the perfect law of liberty and continues in it, and is not a forgetful hearer but a doer of the work, this one will be blessed in what he does."