Your Life Will Soon Look Like A Science Fiction Novel!

I have introduced you to Ray Kurzweil in past posts, and you will remember him as an acclaimed inventor, futurist, and current Director of Engineering at Google.  (Just that title sends shivers down my spine for all its implications!)  Anyway, Mr. Kurzweil has recently published an article on CNN.com in which he predicts 5 ways our lives will be dramatically effected in the very near future.  Let's take a look at his scary predictions: 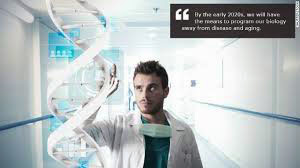 1.   By the early 2020s, we will have the means to program our biology away from disease and aging.  According to Kurzweil, medicine will no longer be a hit-or-miss affair, with newly invented drugs that cure you, yet have a range of side-effects that are sometime worse than the disease.  It seems that scientists now have "the genome code" (there's the first scary proposition!) and can actually reprogram our body's processes, much like a computer is re-programmed.
This is a direct quote from the man that Forbes Magazine calls "the ultimate thinking machine": RNA interference, for example, can turn genes off that promote disease and aging. New forms of gene therapy, especially in vitro models that do not trigger the immune system, have the ability to add new genes.
OK, does anybody else think this sounds creepy?  And isn't this, in essence, playing God?  Our Maker gave us our immune system (that Kurzweil is trying to hinder) for a specific reason... to fight off foreign agents trying to alter His creation! Turning genes off?  Adding new genes?  And just what kind of "therapy" are they planning to do to our genes?  And the ultimate question: Who do these mad scientists think they are?  Unfortunately, I don't think they will be satisfied with "playing" God.
And here is his frightening conjecture:  Technology is already here to reprogram "the software" of human biology, and he proclaims that Clinical applications are now at the cutting edge and will be routine in the early 2020s.
2.  By 2030, solar energy will be able to meet all our needs, revolutionizing the production of food and water.  Some of Kurzweil's forecasts for this area of science include converting the vast amount of dirty and salinated water we have on the planet to usable water, along with hydroponic plants for fruits and vegetables, and in vitro cloning of muscle tissue for meat.  You read that correctly -- he is talking about producing meat without animals, thereby ending what he calls "animal suffering."
But the most disturbing element of these technological advances is this statement by Mr. Kurzweil:  "We are also headed towards another agriculture revolution, from horizontal agriculture to vertical agriculture, where we grow very high quality food in Artificial Intelligence controlled buildings [my emphasis, not his].
3.  By the early 2020s we will print out a significant fraction of the products we use including clothing as well as replacement organs.  Kurzweil refers to the early 2020s as "the golden era" of 3D printing.  He predicts that you will have a choice of "many thousands of cool clothing designs" that are an open source and that can be printed out for pennies a pound.  It's not that the fashion industry will disappear. It will simply be "transformed"; much like other industries that have already been morphed from physical products to digital ones, such as books, movies and music.  OK, I can buy that.  But Kurzweil can never resist going for the shock value.  He almost gleefully reports the following:  "We can already experimentally print out organs by printing a biodegradable scaffolding and then populating it with a patient's own stem cells, all with a 3D printer."  Tell me that's not macabre! 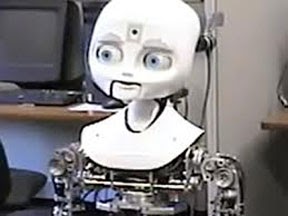 4.  Within five years, search engines will be based on an understanding of natural language.  What that means is that computers will attempt to think and reason like humans, thereby considering themselves human ... or better.  If you need a concrete example, Kurzweil provides one.  He asks us to consider IBM's "Watson", an artificially intelligent computer system capable of answering questions posed in natural language.  Did you know that Watson got a higher score on the TV game show Jeopardy than the best two human players combined?
Could you have answered this question correctly, in the rhyme category: "A long tiresome speech delivered by a frothy pie topping?"  Well, Watson did.  It correctly responded "What is a meringue harangue."
How did Watson do it?  Watson got its knowledge by reading Wikipedia and several other encyclopedias, a total of 200 million pages of natural language documents, and then combining all that knowledge to come up with the correct answer.  But here is the scary part ... it does not read a page as well as you or I.  It might read one page and conclude that there is a 56% chance that Barack Obama is President of the United States.  You could read that same page, and if you didn't happen to know that ahead of time, conclude that there is a 98% chance.  So you did a better job than Watson at reading that page. But Watson makes up for this relatively weak reading by reading more pages, a lot more, and it can combine its inferences across everything it has read and conclude that there is a 99.9% chance that Obama is president.
But what happens when Watson has a glitch in his system?  What's to keep it from becoming HAL in 2001: A Space Odyssey?  Kurzweil says he is part of a group of inventors that are creating a system that will engage you in dialogue to clarify questions and discuss answers that are ambiguous or complex.  I don't know about you, but I'm not ready to trust any system that wants me to "clarify" matters with a computer! 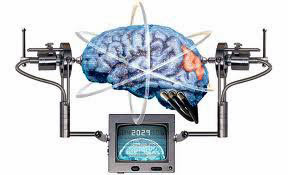 5.  By the early 2020s we will be routinely working and playing with each other in full immersion visual-auditory virtual environments. By the 2030s, we will add the tactile sense to full immersion virtual reality.  Much like the telephone is virtual reality, in the auditory sense, in that you can meet with someone as if you are together, Kurzweil predicts that we will soon be able to add visual, tactile and what he calls "full immersion" virtual reality to our existence.  There's only one small hitch ... the full package will require tapping directly into the nervous system.  But it's no big deal, he insists.  "We'll be able to do that in the 2030s with nanobots traveling noninvasively into the brain through the capillaries and augmenting the signals coming from our real senses."
Oh, yeah, sign me up!  How about you?  Are you ready for this new future?  Nanobots in your brain?  Printed organs?  Computers that will think they know better than you?  Fake meat?  How far away can Jesus be when this is on our radar?  The only full immersion, visual-auditory-tactile environment I'm interested in is the one that finds me in the presence of my Lord and Savior!  May that day come before I have to endure this nightmare.

Isaiah 1:2     Hear, O heavens, and give ear, O earth; for the Lord has spoken: "Children have I reared and brought up, but they have rebelled against me."

Email ThisBlogThis!Share to TwitterShare to FacebookShare to Pinterest
Labels: Out There, Scary Science