I'm not exactly sure why Colorado was picked as a battle state for the Progressive Elites, but once again "The Centennial State" is on the front lines of a Constitutional struggle.  Breitbart.com is reporting that Jack Phillips, a small businessman who owns a bakery in Lakewood, CO is facing a possible prison sentence for exercising his First Amendment right of Freedom of Religion.
Mr. Phillips was asked by two men, Charlie Craig and David Mullins, to bake them a cake to celebrate their marriage.  Phillips, being an Evangelical Christian, believes that marriage is between one man and one woman.  Incidentally, the Constitution of the State of Colorado defines marriage in the same terms.
You see, Phillips puts his heart and soul into his cake creations, and actually feels that he is a participant in the wedding celebration when he bakes a cake for a couple.  Citing his religious beliefs, he cannot, in good conscience, participate in a celebration that he believes goes against God's commandments.  But apparently Craig and Mullins' consciences are centered more on their desires than God's.  They filed a discrimination lawsuit with the Colorado Civil Rights Commission, and the administrative law judge, Robert Spencer, found in their favor.  [An interesting side note to this case:  these men claimed to have been already married in Massachusetts and wanted to celebrate their wedding in Colorado.  Anybody else suspicious that this was a calculated incident to force this issue in the hopes of changing the State Constitution and setting a precedent?  Just a thought.] 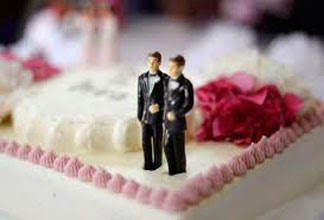 To be fair, Judge Spencer acknowledged that Jack Phillips "believes the Bible is the inspired word of God; its commands are binding on him; and God’s intention for marriage is the union of one man and one woman."  The Judge also found it relevant to the case that "“Phillips believes that if he uses his artistic talents to participate in same-sex weddings by creating a wedding cake, he will be displeasing God and acting contrary to the teachings of the Bible.”  Up to this point, I think the Judge has pretty much represented the Christian view accurately.  If only he had stopped there....
Even with his compassion for the baker's position, Judge Spencer went on to say, "Nonetheless, all this fails to take into account the cost to society and the hurt caused to persons who are denied service simply because of who they are.”  What about the cost to society and the hurt caused to persons who are forced to provide service because of who they are?  There seems to be two sides to every story, EXCEPT when it comes to Christians and their beliefs.
In effect, the court of law is saying that Phillips has no right to follow his Christian faith, or any other religion, when it involves refusing to embrace and celebrate gay marriage, even if there is no legal same-sex marriage in the state where the alleged offense took place!
So what does this ruling mean for Jack Phillips, a Christian baker who owns his own business?  Under a Colorado law in effect in 2012, Phillips could be sent to jail for up to 12 months for his decision. Although that law has been repealed, it is possible that he could still be criminally prosecuted. At the time the article was written, Phillips has stated that he will continue to refuse to participate in same-sex wedding celebrations, even though he realizes that, both under the now-repealed law, as well as for violating a court order, he could be incarcerated.
The Alliance Defending Freedom organization, which is a network of over 2,000 Christian lawyers, is defending Mr. Philipps pro-bono, and released this statement:  Jack Phillips is committed to faithfully following Jesus Christ, regardless of the personal cost.  American citizens should not have to live in fear of a prison sentence merely for disagreeing with the government’s opinion. All Americans should remain free to honor God in our lives and in our work. The government has no business threatening Americans with jail time for simply exercising their constitutionally-protected freedoms of religion and speech. Every American, whatever you think about this issue, should fear a government that ignores the First Amendment in order to exercise this kind of power over its citizens.
Once again, there are obvious questions --- why not just take your business elsewhere?  Why does Jack Phillips have to surrender his legal rights to allow your unconstitutional request?  Where is the support of all Bible-believing Christians in this matter?  I will pray for Jack Phillips that he has the strength of his faith and the conviction of his beliefs in the coming days.  And I will pray for Charlie Craig and David Mullins that they will come to know the tolerance for others that they demand for themselves.  What joy could there be in forcing someone to be a part of your personal celebration?  This case is truly a sad commentary on our culture.

James 5:11    "Behold, we consider those blessed who remained steadfast."