Sending Negative Messages To Our Boys

The trending story yesterday was that of 6-year-old Hunter Yelton and his abhorrent behavior.  He actually kissed the hand of a fellow schoolmate, whom he, incidentally, calls his girlfriend.  Gasp!  And  because his school has strict policies against such behavior, little Hunter was suspended for sexual harrassment!
By now, I'm pretty sure you think this series of events is as ridiculous as I do... that it is just a case of over-reaction by school officials.  To be sure, all the hoopla qualifies for that designation.  But as it turns out, Hunter will now have a permanent record in his student file that will follow him the rest of his academic years.  For a kiss on the hand?!?

It doesn't surprise me that his mother, Jennifer, has vowed to fight this charge and seeks to have his record expunged.  The fact that we are even using those legal words to describe a 6-year-old are remarkable in themselves!
But what kind of message does this send to our young children?  Is there no conception of "innocence" anymore?  Does everything have to be looked at through the lens of lurid adult behavior?  To be fair, Hunter admits that he committed the act.  "It was during class, yeah. We were doing reading group and I leaned over and kissed her on the hand. That's what happened," Hunter said.  But he will also tell you that he has a crush on the little girl, and she likes him back.
So now school officials want to make this into so much more than it is, brand this child "an offender", and perhaps skew his emotional development.  Have none of these institutionalized guardians of our children ever had a harmless school kid crush on a fellow classmate?  In fact, in a USA Today online article, Sandy Wurtele, a child clinical psychologist who specializes in child sexual development and the prevention of childhood sexual abuse, said that what Hunter did was "normal behavior for most 6-year-old boys."  She said children at that age are simply curious about the differences between boys and girls, and the harshness of his suspension will more than likely confuse Hunter more than it will discipline him.  "That really gives mixed messages, negative messages to the kids," she said. "This part of development is just as important -- if not more -- than their academic subjects."
In fact, a January 2001 Revised Sexual Harassment Guide, distributed by the Office for Civil Rights, of the US Department of Education, had this to say:  The important thing is for school employees or officials to pay attention to the school environment and not to hesitate to respond to sexual harassment in the same reasonable, commonsense manner as they would to other types of serious misconduct.  It is also important that schools not overreact to behavior that does not rise to the level of sexual harassment. As the Department stated in the 1997 guidance, a kiss on the cheek by a first grader does not constitute sexual harassment. School personnel should consider the age and maturity of students in responding to allegations of sexual harassment.
So what has happened to that "reasonable, commonsense manner" that was prescribed?  And what is the real agenda behind this over-the-top, excessive punishment?  What message are these zero-tolerance policies designed to send to our children?  There have always been little boys like Hunter; independent, active, energetic little boys who feel stifled in the confines of a classroom.  Do they need to learn to control their impulses, pay attention, and not disturb the class?  Absolutely! 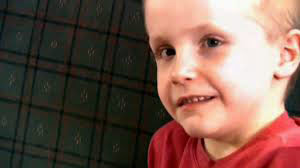 But it is a now a fact that Hunter has been labeled an offender and a problem child.  His normal behavior has been suppressed in an attempt to keep him in line.  After all, we can't have our boys seeking the hands of fair maidens and adopting a chivalrous attitude, now can we?  We don't want them growing up to be strong, independent males; disciplined and using their power to protect the weak and defenseless.  No, our education system seems to be fostering compliant little robots, who bend to the Master's will.  And this kind of indoctrination is already working on little Hunter.  "They sent me to the office, fair and square. I did something wrong and I feel sorry," he said.
Meanwhile, in Florence, Colorado, just 15 miles down the road from where Hunter lives in Canon City, a transgender young man was allowed to use the high school women's restroom even when female students were present. When a complaint was filed for alleged comments the young man made to the female students, the females were told to use the restroom in the school's Main Office.  Hypocrisy, anyone?

1 Peter 3:7    "Likewise, husbands, live with your wives in an understanding way, showing honor to the woman as the weaker vessel, since they are heirs with you of the grace of life, so that your prayers may not be hindered."