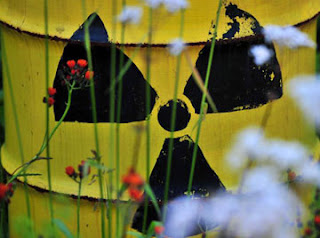 I've kept my eye on this story for the last week or so, and I'm not really satisfied that we have any definitive answers.  Here's why it is bothering me ... Last week, Mexico's nuclear safety watchdog, the National Commission for Nuclear Security and Safeguards (NCNSS), reported that a truck carrying dangerous radioactive material from a disused medical device was stolen.  Of course, they said there was nothing to worry about .... so long as its container was not broken or tampered with.
So among the initial questions that popped into my head were "Was this a planned robbery?  Who stole the truck -- was it one of the drug cartels, or possibly a foreign terrorist cell?  Can this material be used to create a dirty bomb, and are the Alphabet Agencies on the lookout?"
According to Mexican authorities, the truck was transporting a cobalt-60 teletherapy source from a hospital in the northern city of Tijuana to a radioactive waste storage center, and a search was under way in six states and Mexico City.  But wouldn't you think that proper security measures would have been taken, such as GPS tracking devices on the truck or radioactive detectors at the Border?
For those of you who need a little more technical information, Co-60 is a product of neutron activation of other metals. When Iron 59 (Fe59) is exposed to a strong neutron flux, the iron captures a neutron and converts via decay to Co60.  Anyway you look at it, the result is radioactive material, and the effects of coming in contact with it are not pleasant.
It is my understanding that after entering a living mammal (such as a human being), some of the Co-60 is excreted in feces. The remainder is taken up by tissues, mainly the liver, kidneys, and bones, where the prolonged exposure to gamma radiation can cause cancer.  That's just the beginning, though.  People smarter than me pointed out that if you attach a bomb to radioactive material and detonate it, it can in 'fact' become a 'dirty bomb'. The only question that remains is just how lethal it becomes.
But there was no need to worry, right?  After all, our borders are secure, and there's not a chance that this radioactive material could be smuggled across our Southern border, correct?  Then came the report that the missing truck had been found.  Some media outlets reported that while the truck had been found, the container of radioactive waste was empty.  Other media sources reported that "at least some of the radioactive cobalt had been recovered on Wednesday."  But CNN reported that officials weren't sure whether any of the cobalt was missing, according to Juan Eibenschutz Hartman, head of Mexico's NCNSS.  In fact, Mr. Hartman said the container containing cobalt was found about a kilometer away from the truck and had been opened.
As the story continued to unfold during the week, it seemed as though the questions I had asked myself were not as irrational as they seemed.  According to the same CNN source, both the driver and his assistant were taken to an empty lot where they were bound and told not to move. They heard one of the assailants use a walkie-talkie type device or phone to tell someone, "It's done."  So let the conspiracy theories begin!
And as late as this last weekend, health authorities in Mexico City were saying that six people were being checked for possible radiation exposure.  They had been released from the hospital, but remained under detention.  The men were turned over to investigators, and the possible motive for stealing trhe truck and its radioactive cargo were still unknown.
So this story seems to be languishing with no real information forthcoming.  How much, if any of the Co60 is still missing?  Who are these men and what were their intentions?  Will we ever know the results of the investigation, or will this be just another mystery that just fades from the front page?  We can only pray that God will protect this nation and hinder any diabolical plots for this dangerous material.  He knows the plans that have been made, and He has the Power and Authority to hinder and confuse the evil intentions.  To Him be the Glory!

Ezekiel 11:21     "But as for those whose heart goes after their detestable things and their abominations, I will bring their deeds upon their own heads, declares the Lord God."