They Are Running Scared

I have just one word for all the Hollywood know-it-alls, political hacks of both parties, and anyone who thinks we out here in middle-of-nowhere America are stupid .... "Enough!"  I've had enough of the criticism of Ted Cruz and those few like him (Mike Lee comes to mind); you can wind up your propaganda machines and slander him all you want, but us country bumpkins recognize "genuine" when we see it.
I address this to all those who think they know more than we do, and you need to understand this:  we are no longer fooled by the R or the D behind your name.  And you can no longer call yourself a "Conservative" and then vote with the Progressives.  You've obviously sold your souls for political gain and have forgotten your pledge to the people who voted for you.  What is so valuable that your character, integrity and honor are worth sacrificing?  Is it a powerful committee chairmanship?  A kickback for your state at the expense of the American taxpayer?  Or is it simply that the temptation to enrich yourself is too hard to resist? 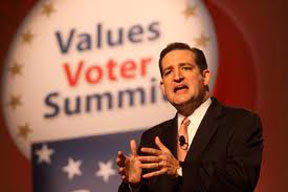 I'm not claiming that Ted Cruz is perfect or without faults.  No human being is.  But up until now, he has shown great courage and principles.  The fact that everyone from the Huffington Post to the DC Power Players to Tina Fey are ridiculing him, must mean he is doing something right, don't you think?
Was his strategy to shut down the government a failure, or did it give the American people a chance to see behind the curtain and all the "dirty politics" that come into play when you don't fall into line?  He held his own party's feet to the fire, when they wanted to cave on defunding the Affordable Care Act.  Their pitiful attempts to throw him a bone, hoping he would abandon what he calls "the train wreck that is causing enormous harm to the U.S. economy" didn't alleviate his cause to represent the people who elected him.  Citing that the American people are "energized" to turn this country around, Senator Cruz made the following statement at the Values Voter Summit earlier this month:
"Only the American people can turn this great nation around. Only the American people!  I’m going to suggest a model for how we turn this country around in the next couple of years. It is the model we have been following together to stop that train wreck, that nightmare, that disaster that is Obamacare.
It is because of you that the House of Representatives has been standing strong --   because the House has been listening to the people; It is because of you that for the past two months the country has been engaged in a national debate about the enormous harms that Obamacare is causing.
There are two things I have unabiding faith in: One is a benevolent God who loves each and every one of us, and number two is the American people who love liberty and opportunity unlike any nation, any people in the history of this world.
Each of you is called to be here. Much like Esther, you are called for a time such as this. For hundreds of years every generation of Americans has given to their kids and grandkids greater opportunity, greater prosperity, a greater future. If we keep going down this road, we will become the first generation not to do that. And every man and woman in this room believes in your heart and in your soul that is utterly and completely unacceptable.”
Now I know that behind every great remark by a politician is a great speechwriter.  But I have watched Ted Cruz, and this man doesn't blink.  He doesn't shy away from controversy, nor does he back down from the relentless bullying and strong-arm tactics from members of his own party.  I hope I'm not proven wrong about the man, but it seems as simple as this .... People comes before Party.
And that's refreshing!  And the people seem to recognize a champion for their rights as free citizens. Only time will tell if he can remain untainted by the soul-killer that is Washington D.C.  Until the time that he disappoints, like so many before him, I will keep my eye trained on his every move and word.  If he is just grandstanding for public opinion votes, it will become apparent as we move through the treacherous economic times ahead.  But for now, he seems to be the primary candidate for People's Choice.

2 Corinthians 8:21     "For we take thought beforehand and aim to be honest and absolutely above suspicion, not only in the sight of the Lord but also in the sight of men."